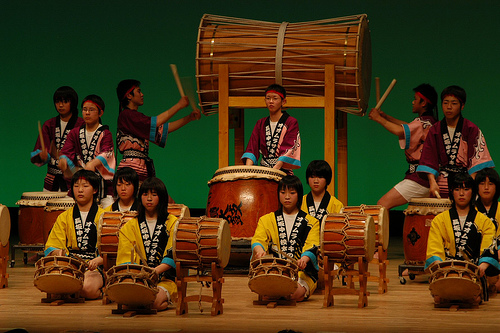 All right, let’s do this. Japanese beats and Korean eats, green events and outdoor movies…it was hard to come up with a theme other than, “This is stuff I would be doing if I weren’t playing violin in a wedding tomorrow.” So it’s up to you to enjoy on my behalf. I’m counting on you!! Free Taiko Concert: Taiko 10 â€œTaiko 10â€ is a free community concert to be held tonight in Noguchi Plaza of the Japanese American Cultural & Community Center in Little Tokyo, Downtown. With a compilation of performances from 9 troupes from all over North America, a diversity of taiko styles that have developed this side of the globe will be on display. If you haven’t seen taiko up close and personal, I’d highly recommend checking out this free concert. I’m always intrigued by what it takes to make a taiko ensemble come together - including visually. It’s an experience inÂ and ofÂ itself.

Noguchi Plaza, Little Tokyo, Los Angeles 244 S. San Pedro Street Los Angeles, CA 90012 Taiko Jam If youâ€™re jonesinâ€™ to get a serious dosage of Taiko drumming, you can also see it performed inside the Japan America Theatre the following two days. Taiko Jam is a competitive showcase of the brightest troupes in culmination of the North American Taiko Conference. Iâ€™ll be there on Sunday to see my girlfriend Jen with her Las Vegas group.

The Summit 3223 W. Sixth St. Los Angeles, CA 90010 Â  Multeepurpose Concept Store and CafÃ© Grand Opening Multeepurpose is opening its first concept store with cafÃ© downtown. The cafÃ© features high quality organic teas, fine Italian espresso, organic coffee, juices, and pastries, as well as a selection of vegan and organic raw food options. With health, innovation and sustainability in mind, the cafÃ© aims to merge these concepts with instant printing and technology services. The store will carry socially conscious brand clothing such as Livity Outernational (known for raffia straw) and Revel 7 Jeans (organic denim). Saturday’s opening eventÂ will benefit five of the companies leading not-for-profit organizations: Chrysalis, Oisca, California Wildlife center, Voices of African Mothers and The Samaly Mam Foundation. A live DJ will drop beats in a â€œlivingâ€ room with live grass and trees. Lounge in this green concept while sampling bites provided by Spitz restaurant. Open bar will feature TYKUÂ Asian Spirits, Tru Organic Vodka, Asahi Beer, and Kharma Tequila. At the end of the night, prizes from Revel 7 Jeans, Skull Candy, Livity Outernational, and Multeepurpose will be raffled off. Oh yeah â€“ and there will be a fashion show with models! And green moss bikinis! (Yeah, I knew that did it.)

269 S. San Pedro St Los Angeles, CA 90012 Â  Bullitt at Hollywood Forever As a car freak, Iâ€™m going to have to recommend the Bullitt screening at the cemetery â€“ featuring Steve McQueen doing his own driving stunts in a Ford 390 Mustang. Heâ€™s like a spy and stuff. â€˜Nuff said.

Cinespia 6000 Santa Monica Blvd. (at Gower) Los Angeles, CA 90038 Pretty In Pink at Silver Lake Circuit City And in homage to the late John Hughes â€“ itâ€™s pretty crazy timing that Pretty In Pink was on the schedule for tomorrow since the Hollywood Outdoor Cinemaâ€™s inception a month ago.Â Come in your prom attire (maybe itâ€™s time to give that Blogger Prom outfit another go) and if you have the best costume youâ€™ll win an Xbox360. Also â€“ if you bring a bag of clothes from the â€˜80s, youâ€™ll get half-off admission. A photo booth will be on site â€“ bonus! Show me pics!Â I will admire you from afar…