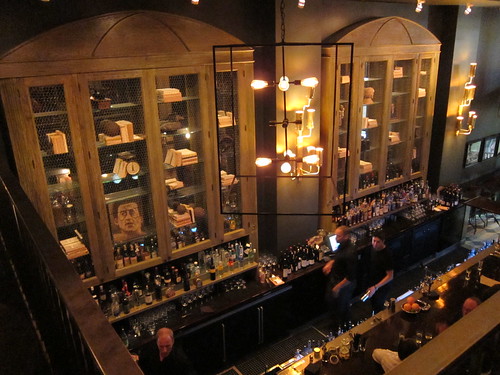 [/caption] Hollywood is an awesome place to live. Not because of the bottle service and certainly not because everyone drives in from The Valley and Orange County on the weekends for the purposes of said bottle service. [caption id=“” align=“alignright” width=“240” caption=“Chicken & Waffles with Maple-Roasted Squash ($14)”] 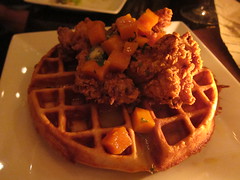 [/caption] It’s a great place because of the very spots that are overlooked in favor of bottle service and bass. Currently entering the second month of its operation, Wood & Vine is a two-story, neighborhood spot at which you can meet up with your friends and enjoy wine, beer, cocktails and/or food in a pleasant setting with wood furnishings and sage interior. There’s also a beautiful patio in the back - complete with lighting, ambiance and open flame - that may give you inklings of New York City thanks to the surrounding Hollywood “skyscrapers.” The food is created by Gavin Mills, who was last sous at Bastide under Joseph Mahon (see previous post). As done in more and more eateries out there, he employs snout to tail and locally sourcing philosophies in that small kitchen and does a great job doing so. All the charcuterie, pates and rillette are made in-house, and together with cheese, start at $8 for three, $12 for five and $15 for seven. [caption id=“” align=“alignleft” width=“240” caption=“Potato Gnocchi | Pea Tendrils, Spring Garlic, Confit Onions, Truffle ($12)”] 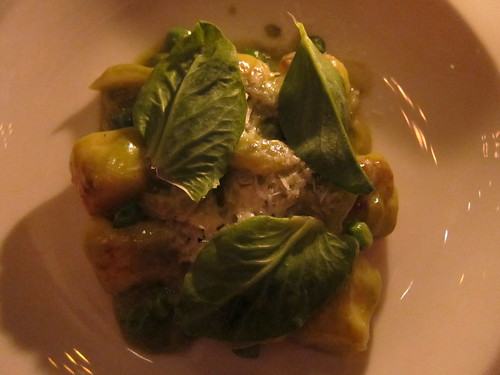 [/caption] I sampled about half of the small, manageable menu (I’m all for quality execution over spreading oneself thin while indulging indecisiveness) and, of everything I tried, came up with a handful of favorites. The chicken and waffles was a refreshing rendition, with fluffy breading surrounding a sparingly syruped quarter-chicken over a bona fide, house-made Belgian waffle. The maple-roasted squash was delicious, too, with the $14 serving being none-too-sweet. Just perfect, actually. The gnocchi were savory pillows, accompanied by pea tendrils, spring garlic, confit onionsÂ and just a touch of truffle. Beautifully simple and delicious. And if you want a little twist on traditional lasagna, Wood & Vine’s oxtail variety comes in its own, adorable Pyrex glass with horseradish and house-made ricotta - and packs a subtle, but muchÂ appreciated,Â kick. But oh, those scallops. Granted, you have to screw things up really bad if you turn out bad scallops, but not only are these huge babies perfectly seared (with that crispy,Â barely-charred exterior), they come accompanied with Jerusalem artichokes uponÂ some deliciouslyÂ truffled grits. There was nothing left on the plate when I was finished - not even a smear of grits. [caption id=“” align=“alignright” width=“240” caption=“Grilled Scallops | Truffled Grits, Jerusalem Artichokes ($16)”] 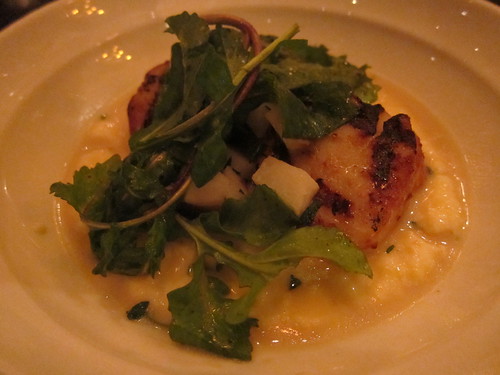 [/caption] I have yet to go back and try more cocktails (headed up by Jason McBeth)Â on for size.Â The Manhattan I ordered was good once I requested that it be served straight up (since it was initially served on-the-rocks), but I’m thinking that since I went early, they’re still getting their program squared away. However, their brown (whiskeys, ryes, bourbons, what have you) selection looks somewhatÂ extensive, so I can’t wait to take a closer look. The dessert menu looks enticing, too, if also humanitarian, with proceeds from the sales of profiteroles going directly to the Los Angeles Youth Network - a cause that the owners care about. Another dessert that caught my eye: Butterscotch pot de creme with salted caramel ice-cream. Mmm. The guys behind Wood & Vine, despite the big space, did a great job at creating a warm ambiance and concentrated food and cocktail menu with only the necessities. It’s the place that nightclub birds walk past on their way to Hi-NRG spicy tuna wonderland while you’re inside, cozy while nibbling cheese and sipping on your Aviation - perhaps alone, perhaps in a group (because it’s big enough for that). Please, keep walking. All food, wine and cocktails were hosted.