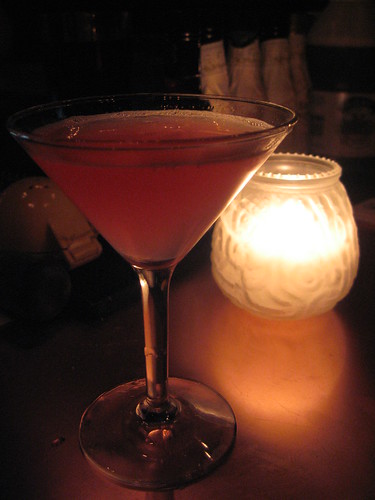 It was an intimate event on the second floor of Malo Restaurant on Sunset Blvd. in Silver Lake where Gran Centenario Rosangel tequila would be launched. The lady mixologists started off the night on a positive start - showing everyone they have just as much as the guys (if not more) - of what it takes to mix the best drinks in Los Angeles. My guests and I were the lucky ones to get the first drinks specially made for the night by mixologist Natalie Bovis-Nelsen a.k.a. The Liquid Muse. It was called the Flor de Maria and was delicious, potent and a perfect note to start off the night.

Once the ladies were done with their showcase, the competing mixologists took their individual stations positioned throughout the bar. Names of their concoctions included Angel’s Apiary (Mark Blackhart) and the Ramos Rose (Jason Bran).

As a bonus, raffles were held for tequila and spa services. But for the results of the night:

Judges’ choice was Matty Eggleston of The Hungry Cat and The Varnish for his comforting cocktail of Nutella, steamed milk and Rosangel Tequila. It was appropriately called Lullaby.

Enough tantalizing liquid tastes to go around - but not least were the appetizers we all devoured before the servers could set them on their respective tables. There were beef tacos with pickles in them that somehow just worked. Other tacos had potatoes and cheese in them - also delicious. The bean and cheese tortas were another vegetarian option if you didn’t already fill your stomach on freshly-fried, crispy chips and salsa. Oh…the salsas. All were good. Fresh pico de gallo and verde were on hand but I have just two words for you: Habanero salsa. One of those situations you found yourself in where you just couldn’t stop shoveling that burning sensation straight into your mouth again and again.

Mmm…tequila never tasted so delicious. If your Jose Cuervo college experience has you sworn off all tequila for good, it’s time to try the real stuff.

Many thanks to Caroline for the invite on the wonderful night.