There are tons of special event wine tastings that I’ve passed up, most likelyÂ because I was lazy or they sounded run-of-the-mill.Â But when I heard - thanks to Caroline - that Colorado Wine Co. in Eagle Rock was pairing wines up withÂ ”white trash” foods, I couldn’t resist the opportunity. Unique and ingenious, I thought, in this day and ageÂ of Anti-Elitism. Because I may live in the “fake” parts of the United States, but you can’t ever say I ever forgot where I came from. (Then again, the Midwest isn’t really White Trash country; I tend to regard it more as the White Ghetto. There’s a difference, y’see? It’s more Harley-Davidsons and General Motors than Haulmarks.)

Apparently, this was their 2nd time holding the event and it definitely did not disappoint.

I had a great time with HC of LA-OC Foodie and Caroline. LuckilyÂ they arrived earlier thanÂ I did andÂ were able to snag a table for us three to sit comfortably. And the 4-courseÂ menu? 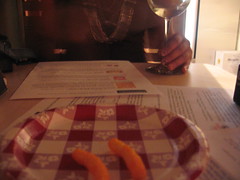 BouffÃ¨es de Fromage: Also known as cheese puffs. But give me a minute here. I’m serious. The light flavor of the white champagne was - seriously - a nice compliment to the artificial, powdered cheese. And the bubbly kept the air in the puffs (or should I say “bouffÃ¨es?”) whistful, even whimsical. Yeah, artificial cheese powder can get whimsical -Â you betcha.

I know you’re laughing, but we went back for more Target brand cheese puffs (yes,Â we even asked)Â - 2 times. 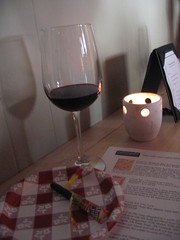 I’m sure Argentinian wine is delicious, but Charcuteries de 7-Eleven aka Slim Jims just are not. Sorry, folks, when I visit 7-Eleven and I feel like beef, I’ll get the Pemmican Beef Jerky at the very least. Trust me, I’m an expert on 7-Elevens; I live behind one.

I couldn’t give you an accurate assessment on this pairing - or even the wine for that matter - because the artificial grease from the Slim Jim pretty much would overpower any wine it’s paired up with. ;) 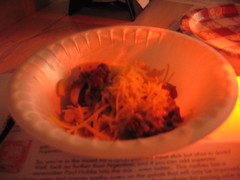 The Frito Lays topped with “Cincinnati-style” chili and cheese was hands down the most appetizing of the food bunch - and we were hungry. The red that accompanied it was a pleasant dry and spicy variety to really nicely bring out the kick in the chili. And of course, the cheddar cheese that topped the concoction made it an instant match since, well, what matchÂ withÂ wine isn’t made more perfect with the addition ofÂ cheese? Great pairing! 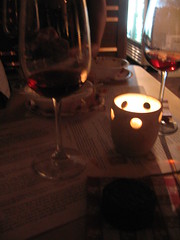 Ahh…dessert. Yeah, I know the picture is dark, but that’s a little Ding Dong in the corner there. Granted, our palates were, after artificial cheese, meat and Fritos, ready for a couple sweet somethings to soothe our taste buds. The Ding Dongs brought back memories from a sack lunch childhood but were enhanced by a very delicious port wine that was subtle and not too overpowering. It went down smoothÂ and was like spiking the Ding Dong! It was a unique experience and definitely something I’d try again - if not just for the novelty. But all the pairings did match (okay - even the Slim Jim to an extent) quite expertly and for $20, it was a fun afternoon at a bargain.