What Will They Be Eating at The 63rd Annual Primetime Emmy Awards? 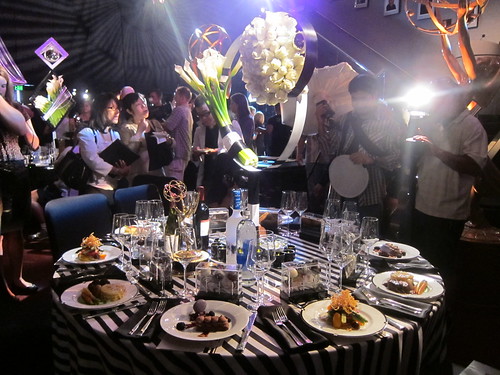 [/caption] I don’t cover a lot of entertainment news on this blog, but when it comes to Los Angeles and the entertainment industry, the latter is an undeniable part of our culture as…well, television. [caption id=“” align=“alignright” width=“240” caption=“Windrose Farm Heirloom Tomato Salad”] 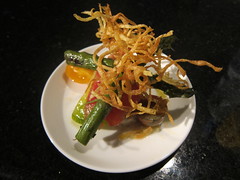 [/caption] Tomorrow, our TV stars will be gathering at the L.A. Convention Center for the 63rd Primetime Emmy Awards Governors Ball, and Patina will be catering the star-studded, “mod illusions”-styled event for only the 16th time. The Governors Ball will be painted in black and white and everything nice. Awhile back, I got a chance to get a glimpse of the motif as well as taste miniature versions of the courses guests will be enjoying tomorrow. …Such as this Windrose Farms heirloom tomato salad with rosemary and cherry wood-grilled asparagus. Fried gold potatoes and fried crisps decorate the top of the dish. This is a great first course to close out the summer. [caption id=“” align=“alignleft” width=“240” caption=“Filet Mignon, Gratin of Macaroni w/Vermont White Cheddar”] 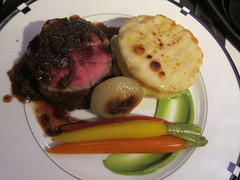 [/caption] The entree course tomorrow will be Filet Mignon with an oxtail bordelaise. Gratin of macaroni (that is, a cylindrically-cut tower of horizontally-layered tube pasta with Vermont white Cheddar) and rainbow baby carrots line the plate as do a cipollini onion and caramelized broccoli emulsion. Unless you’re vegetarian, it’s pretty hard to argue with a Filet. It’s also hard to argue with macaroni and carrots. With a 3-course menu this simple, it’s clear that Patina is going with ingredients that will provide the least fuss for a - let’s face it - potentially fussy bunch of diners. [caption id=“” align=“alignright” width=“240” caption=“Duncan Hines Milk Chocolate Brownie, Chocolate Blackberry Cream, Blackberry Macaron, Chocolate Rice Crisp, Honey Sauce”] 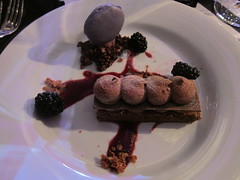 [/caption] I’m still curious as to what they’ll feed to the vegetarians and vegans. This is L.A., right? Patina will be on-hand to take care of all the needs of all 3600 sat-down guests. They’re well-equipped in the front and back of the house to tend to all dietary preferences and restrictions. The dessert course, in all its glitz and glamour (and glitz), would be a vegan-banned course as well. The Duncan Hines milk chocolate brownie is ensconced in chocolate blackberry cream and chocolate rice crisp. Blackberries line the plate and flavor of the lone macaron on the side. And all three of these courses will be served in a setting that is designed to trick the eye, complete with a 60-foot, centralized and elevated, circular dance floor and orchestra platform. As for cocktails by Grey Goose, I sipped on a delicious almost-grapefruit-tasting cocktail that they’ll be serving to guests tomorrow. It was surprisingly not too sweet and as far as vodka cocktails go, this is one of the ones I’ve liked in recent memory (in no small part due to the fact that I barely drink them, period): [caption id=“” align=“alignleft” width=“180” caption=“The EmmyÂ®”] 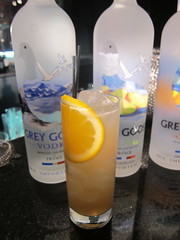