What I Learned From Getting Mugged 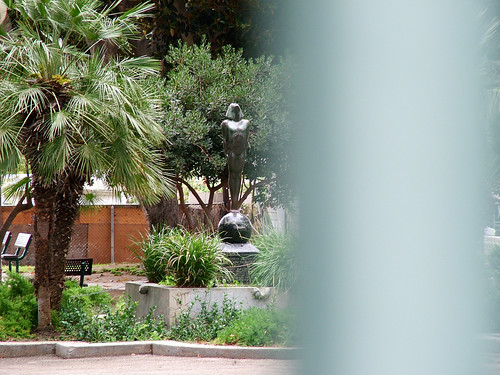 [/caption] There were many things about the place I moved from one month ago that had seen my tenancy surpass seven years, but the one that comes to mind other than affordability is that I was geographically in the center of Los Angeles. I never had to choose - I could drive as easily to Venice as to Silver Lake and come back again. But there came a point where I longed for my own home - even one that came with a neighborhood where I could walk and defy Missing Persons. A community. I was ready to commit to the community of my choosing. A girl I met last week, subsequent to obligatory introductions, asked, “Into Hollywood?” It didn’t bother me. From Farmer’s Market on Sundays to the movie theatre, the largest independent music store and Trader Joe’s - I can walk anywhere, and I started to, immediately. What a nice park I have down the street. And as I walked in my new neighborhood coming toÂ that park I saw the woman, darker-skinned and with waist-length dark brown and blonde dreads. 5’6”, 135 lbs (medium build). Orange tank top, jeans and jean shirt. I would sooner tell you I had no clue what her ethnicity is or countless haven’t surmised my own, eager to prove their ethnic guile and cunning. She crossed the street to turn her back to that fence and fiddle with her phone, as if that spot by that fence in front of me at the time was so much better than that other spot at which she justÂ stood, I think,Â 15 feet away. I had the headphones on - and of course this was a no-no after dusk but I was to learn, apparently also at 1:30 on a Sunday afternoon. Targets are what targets do, and thankfully I wasn’t lost in my playlist as I heard those ungraceful footsteps run up from behind me. Instinctively, my right arm -Â the purse arm -Â tensed and clutched to my side. She grabbed my purse which was in my armpit and tried to run past. Instead, with my purse still attached to my shoulder, she boomeranged around back to me, whereby sheÂ started to land punches on my head and body. (So the witness told me, later. Calling the fight a “flash” in my recollection would be accurate.) She repeated, “Gimme your purse, bitch” - which in hindsight is not an effective way to coax someone out of their cash, credit cards, driver’s license, Shure headphones, cell phoneÂ and iPod Touch - and is also not the greatest thing to say to someone whom you’ve underestimated. With my right arm still clutched to my side determined not to unhook my handbag and not feeling any of the “numerous” blows my helpful witness recounted she landed on me, I kicked back and punched with my left. She careened me towards theÂ white picket fence at June and De Longpre, pulling my hair. I whipped her back around, kicking her in the stomach.Â We continued as I screamed from within the far reaches of my lungs to the passing cars who probably thought they were witnessing a chick fight, what with my female mugger. We continued, and after a bit the neighbors finally took notice that this wasn’t a drama over a guy. She went for the kidneys from behind with a weak chokehold and her thumb landed by my mouth. I chomped, my senses too heightened to notice if I broke skin (I know I did). People finally walked up; she ran away without so much as a thing. Maybe handfuls of hair. My prescription glasses were on the sidewalk where she accosted me andÂ a neighbor pickedÂ them up for me.Â I had fought her off,Â blind. A bimbo in a Volkswagen New Beetle with a turbo kit and color-matched wheels rolled up on De Longpre: “Was she with you??” If I didn’t need to recover from the adrenaline rush that had saved me a second earlier,Â she would have beenÂ next. The neighbors who came to my aid filled her in: “She just got mugged!!” My witness also recounted that he saw the woman with a white male accomplice, black cap and black shirt. To the told-you-so’s on my moving into Hollywood from posh Beverly Hills Adjacent: I wouldn’t be deserving of a neighborhood I wasn’t willing to fight for. I look at it as paying dues early, not a pattern doomed to repeat itself. (Yet.) And like I was saying about targets, I learned a few things about my experience:

Thanks for reading, everyone. It’s a departure from the bulk of my usual content, unless you consider it more Los Angeles-related material. It’s not a fun topic, but necessary. Stay safe out there. P.S. - Besides my witness, I also wanted to thank the decent guy in the red Honda Element who made sure I was OK and got home safely for my police interview.