What Defines You Divides You

Italy’s a great place to eat. Now that I’m in Germany, this fact is ever more exacerbated as I’m craving Italian pasta yet dreading ordering any such imitation of the cuisine. (I don’t care what you say–it’s an imitation if you’re not in Italy.) Sorrento, a charming city located on the Amalfi Coast, was no exception. Roycifer and I looked in his Italy travel guide after we left and found that a restaurant we had chosen to eat at for dinner one night, off the beaten path, was in the book’s “Sorrento Recommended” list. It was by chance–well, we had “chosen” it because it was off the main drag. As in all things, the further you are away from a main street or piazza, the cheaper it is, no? But the restaurant, called Da Gigno, was in the tour guide and what’s more, the meal that we had ordered was almost the exact same meal they recommended inside the restaurant recommendation. 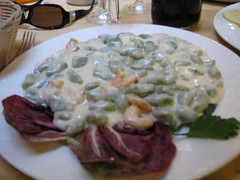 I got the gnocchi verdi provola e gamberi. That is, spinach green potato dumplings in cream sauce with provolone, served with tiny shrimp. Never mind that I had eaten about 40% of the entire dish as each potato dumpling and shrimp coated with provolone sank like rocks to the bottom of my stomach … the wood-fired pizza we ordered as a compliment was delicious. His butterfish was delectable. And we were satisfied. During the hearty meal, however, we had some hometown entertainment. And so the place was a “find” but it wasn’t. Nearby sat a group of 4 more-than-middle-aged Americans that had broken off from a larger tour group. They spoke often of vouchers that they were redeeming for their meals. (Yeah, so it’s in a friggin’ tour book and now these huge group tours got dinner vouchers for the place. What.) I’d be hesitant to say that it was “Yankee company,” however, because the most vocal of the 4 was a silver-haired lady who spoke with a Southern twang. I died on the inside as they she spoke about American politics. “And you know that Barack Obama?” She lowered her fork and knife as she eyed her company and spoke in a low, deathly voice, before getting louder: “You know that if he were to get elected, he’d get sworn in on the KOH-rann?” Then, she kept eating. In a high-pitched voice she said, “Man I can’t believe it, that’s so absurrrd!” She went on. She went on about Fred Thompson and how much she liked him. Someone else chimed in then, though my eavesdropping overhearing didn’t catch on. And she added, “Yeah that Giuliani, I like him too.” You know. I don’t care if you like Fred Thompson. I mean hell, I like Fred Thompson, because I have been a fan of Law & Order for the past 15 years I-kid-you-not. And who needs to even know his politics (what are they, btw?) when on TV he brings justice his own reelection to the DA office?? The guy gets it done. On TV. And that’s all that matters. Besides, don’t discriminate. Against actors. Regan did all right, didn’t he? And whatever that Barack guy’s politics are, he’d get sworn in on the Koran if he got elected.

A couple years ago I’ve had some (white) friends who did some traveling overseas who mentioned that if they got asked, they’d say they were Canadian but never American. They said it was to avoid some ghastly reactions indicating anti-American sentiment. I could understand that, I guess. Especially since this was about the time G.W. Bush declared a “victory” of the sort over some war we were fighting. Roycifer and I haven’t really encountered any of that during this trip. Of course, perhaps it’s because we’re Asian American and the curiosity over our eyes and hair trumps their potential hatred of The States. A few “ching chongs” here and there both in Italy and Germany, and actually later that night in Sorrento, Roycifer got asked if he was from China. We corrected him and said Los Angeles, but what the Italians and Germans who’ve approached us really want to know is the blood. (London, on the other hand, is quite an international city.) You know, they’re just curious. The waiter who served me a Bavarian beef dish with noodles and salad last night in Munich said, “I only know one Chinese word–and that is ‘Sayonara.’” We laughed and taught him a new word. The correct word. The exchanging of trivia went both ways–turns out he was from Italy. Home is where the heart is. Home is where you feel you belong–and whatever that’s contingent upon, that’s your battle to fight.

Tonight, while we were waiting for our S-bahn train on the platform, I found a drunk guy in lederhosen–obviously heading home from Oktoberfest–who needed help. He stumbled over to me and started speaking German while pointing up at the screen. I tried to understand, but he was kind of slurring his words. “Sprichst du Englisch?” He made a skosh gesture with his fingers and says, “Little bit.” After many broken exchanges while still pointing up at the screen, we discovered we were waiting for the same train and he was at the right place. Finally, I asked, “Wo sind deine Freunde?” (Where are your friends?) He laughed and then just kind of stared into space. I cracked up. A guy waiting for the same S-bahn train about 30 feet away turned and saw our new friend, “Heyyy…” We exchanged similar Oktoberfest separation stories–ours from a couple days ago. “First time?” he asked. Yes, it certainly was. When he asked where we were from and again we said “Los Angeles,” he said, “Ahh but you don’t look like you’re from Los Angeles.” By then we were used to it. I said, “Yes, Los Angeles has many kinds.” He responded, “Yes, the United States has many kinds.” Indeed. I wanted to say that many Americans, all inherently immigrants, still haven’t figured that out. And that has been my battle to fight–but it comes with the territory. But it’s mine–and it’s fine. *e