I could swear J.K. Rowlings was inspired by Annie Wilkes in Misery--so much that she decided to create Dolores Umbridge in The Order of the Phoenix. Consider the similarities, if you will. Annie Wilkes cooked delicious dinners and baked cookies for Paul Sheldon, just like Headmaster Umbridge probably gave her kittens and cats tuna every day for dinner. At night, Annie Wilkes broke Paul’s feet and ankles against a wooden block while … I admit it. I never read the Harry Potter books. When it comes to that series, I am a straight-to-movie kind of gal. But I could picture that saccharine, pink-dressed, evil teacher locking her kitties inside her room so they could be as near to her as possible as they fulfilled all her needs for furry friendship. *cough* I admit it, though. That’s exactly what I’ve done. I’ve locked Rufus inside my room.

Chauncey, my roommate’s cat, has been at my house, y’see, for approximately 5 months. He’s the King Cat. The Prince of the Household. His role in the residence? “Sole cat.” He’s been largely unsocialized and not lent to get along with other cats. Or kittens. Enter: Rufus So I’ve been reading up on the results of my Googling “introducing second cat” quite diligently for the past week. I’ve been noticing some common trends in the articles. Let the kitten get comfortable with and establish his own place in the house. Bond with him. Have the first cat and kitten sniff each other under the door. Be patient. When they finally meet, do not interfere no matter what happens and allow them to go at their own pace. “Cats are naturally territorial.” Got it. An interesting article talks about cat temperament: telling an alpha personality from a beta and a gamma. I’ve concluded that since Chauncey is definitely an alpha (a “mad scientist” in that he has to have his paws on everything), a Bengal kitten would be a good match as the breed is partly wild. What a cute thing it was to see what must have been Rufus’ first time looking in the mirror. The arched back and raised fur while sidling sideways and then hiding again–so awesome. Chauncey, when excited, scared, surprised or stressed, has 4 natural reactions. He hisses, his pupils dialate, the fur on his back raises and his tail gets bushy and thick–as if a squirrel. If I didn’t feel sympathetic at his discomfort, I’d think the bushy tail was cute. The past 3 days I have seen his pupils dialated almost all the time and I do think his tail has gotten permanently thicker. He is also even more skittish than he has been in the past. Lately, when he’s passed by my closed bedroom door he’s hissed at it. When I’ve come out of my room, he’s hissed at me. One minute he’ll sidle up to me like he used to for a back scratch. The next second his backed is arched the mean way and the hisses come. He’s conflicted. I feel for him. I’m just thinking of the future when they will hopefully become playmates while the humans are at work. If When he gets used to Rufus and Rufus gets used to Chauncey, just think of how much fun they’ll have. They will collapse at the end of the day like the happy cats they’re meant to be. Just like this: 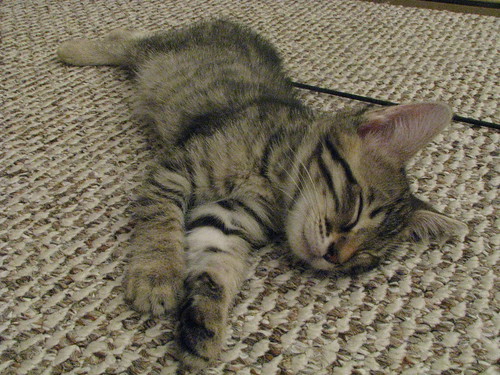 They will meet face-to-face next week. :) *e