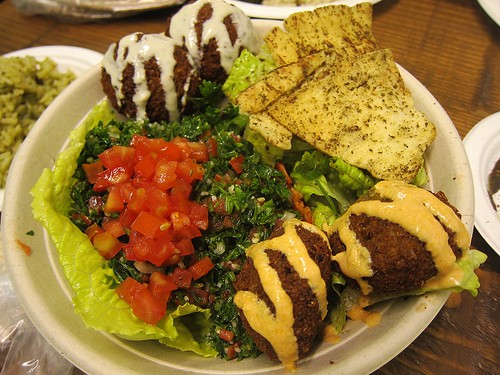 Tabouli, Fatoush & Falafel[/caption] Though there’s a new eatery in the neighborhood, its proprietor is anything but a stranger. George Abou-daoud’s newest venture (The Bowery, Rosewood Tavern, Township, The Mercantile) does not actually include a liquor license. Instead, you’ll find fresh Lebanese made from scratch. Your trusty Mediterranean selections like babaganoush, lebneh yogurt, organic chickpea & quinoa falafel, tabouli, fattoush salad, vegetarian kibbeh, lentil mujadarra, stuffed cheese rolls, fried cauliflower can be found at Urban Garden for an average combo price of $9-$15 a pop. It’s a great addition to Fairfax Village, at once metaphorically and physically across the street from mainstays as historic as Canter’s and iconic as Animal. The best part is that the fare is flavorful as it is healthful, with tabouli that pops, hummuses that comfort, tender falafel that crunches. I especially loved the variety of falafel that had quinoa in it. And for vegetarians and vegans, suitable menu selections are easily noted. Try one of the house combos for some tried and true flavor combinations. On the meat tip, I really enjoyed the lamb shawarma. The rotisserie chicken sounded promising, though I’ll have to try that on a return visit. And to keep things even more fresh, four new menu items are rolling out on Friday: Couscous, currants, toasted almonds and feta salad, Lentil mujadarra, Stuffed cheese rolls and Vegetarian kibbeh. Urban Garden is a great study in an emphasis on fresh ingredients used in Mediterranean fare at an affordable and accessible price point. Medi- for the masses!