I was on my way to my therapist’s office yesterday for one of those all-revealing, heart-wrenching sessions when I saw an M6 turning left. It looked like my coworker’s car. I looked as I passed and sure enough, it was him - complete with yarmulka covering half his head. He was the same coworker who had just started snowboarding this year and rode the lift up with Brad Pitt, Maddox and Pax Jolie a month ago. Thought I would let him know of my “spotting” him via SMS.

Me: Just passed you. Him: Lucky you. How’d I look - good? Me: Like one of those assholes who drives a Bimmer. Him: Bitch. 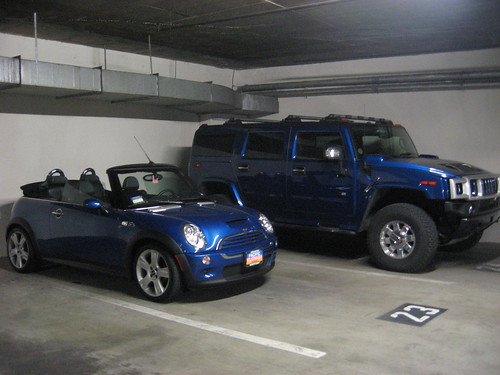 Take my word that imaginary laughter followed on both sides of the conversation. There are just some kinds of conversations (or even friendships) where there’s an unspoken, agreed refusal to take oneself seriously. Of course, what I didn’t realize til soon after was that the irony of the text conversation was now, I also drive a Bimmer. Yes, I own a BMW. It was easy to pretend I didn’t have one. Call it denial because it certainly was. I reassured myself that having a Mini is worlds away from owning a BMW. Besides, I’m nothing like a M3 owner*. ;) And then, I develop this habit of staring at the side doorsill whenever I step out of the car. It makes me frown, actually. The kind of frown that’s kind of an upside down smile but really still a frown. And there’s this tinge of self-loathing about it. The label containing the VIN, the recommendations on tire pressure, high octane fuel - and of course the make and model of the car is there on that sill. And mine says, “Bayerische Motoren Werke.” 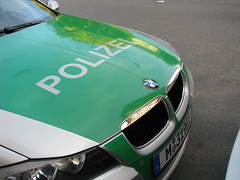 I went from owning “The People’s Car” to owning a piece of snooty, elitist German luxury hunka metal the automotive pride and joy of Bavaria. Granted, when you’re actually in Bavaria and own a BMW, it’s like owning a DeVille in Detroit. I was surprised - but not really - to notice in the Munich leg of my Europe trip last fall, that even the police cars were BMWs. And to be honest, you see, I feel now as though I was meant to have visited the homeland so that I might leave the country less biased about it. I really and truly do enjoy my car. She’s my Chelsea. Why ruin it? Back to that notion of not taking myself seriously… Q: What’s the difference between a porcupine and a BMW? A: With a porcupine, the pricks are on the outside. :) * If you own an M3 or a BMW, please know that I hold nothing against you but please also don’t pretend that you guys we are the friendliest guys in the automotive enthusiast world. At least you we’re not in the Supra club, right?