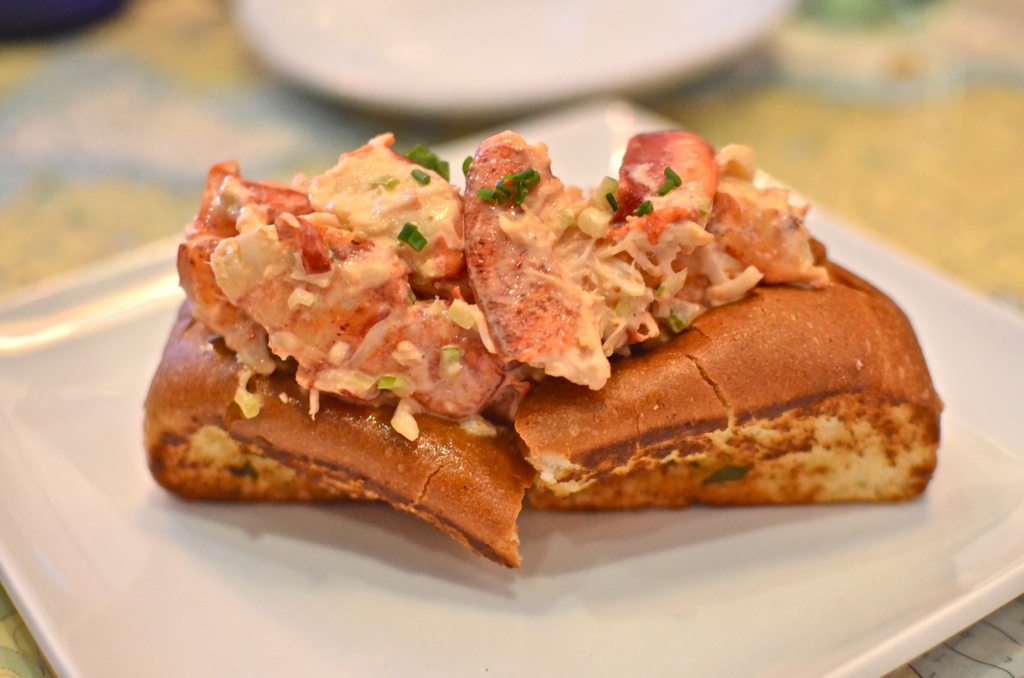 Lobster Roll - Blue Plate Oysterette[/caption] DineL.A. is back and it’s time to scour the menus of participating restaurants all over town. I’ve come up with some reasons to jet to a particular dining establishment near you, whether for lunch or for dinner. Some restaurants offer exclusive dishes to dineL.A., others are offering a particularly enticing lunch and/or dinner menu. There are also participants that might normally be out of your price range or sense of adventure, but dineLA might just be the right occasion to give them a try. I recount a few highlights I’ve encountered while scanning through all dineL.A. options [one page]. While I won’t get through all of them, it’s completely possible for one to physically do all of them with 2 meals per day over the course of 14 total days - with some meals to spare. So get on with it: Your deal-grubbing taste buds and gym membership await. [caption width=“1024” align=“aligncenter”] 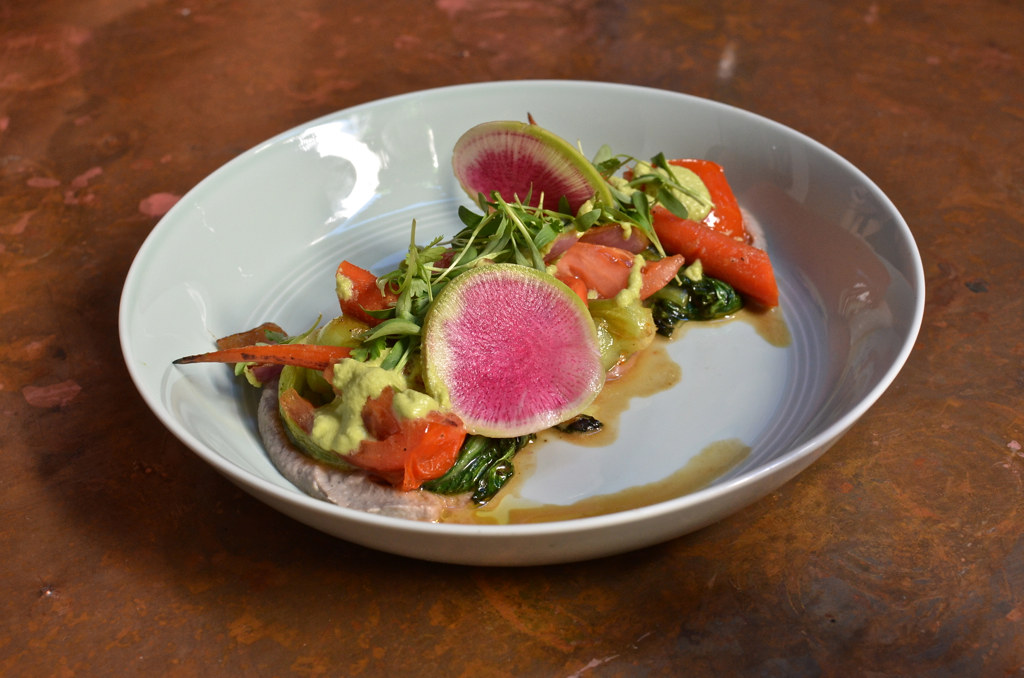 Watermelon Radish Salad at Brilliantshine[/caption] Santa Monica: 1) The $15 lunch at Bar Pinxto Whatever neighborhood-y feels you get in Santa Monica are in large part because of Joe Miller’s Bar Pinxto, the local and more than capable Spanish tapas go-to here. Because before there were small plates, there were tapas. Three courses for $15 prove to be a delicious bargain, and includes selections like Mussels, Maya Head-on Shrimp, and Tortilla Espagñola. 2) The lobster roll at Blue Plate Oysterette (also a 3rd Street location*) Taking into consideration that: 1) The lobster roll normally costs $24 at Blue Plate Oysterette, 2) It’s available for both their dineL.A. 2-course lunch and 3-course dinner options and run $25 and $50 respectively, a cost-benefit analysis would conclude that you get a free appetizer or dessert, also respectively. Also consider: 3) Freshly delicious, well-seasoned seafood. 3) The 3-course, $30 dinner at Brilliantshine Paiche veteran Richie Lopez creates cocktail-friendly, Peruvian food to enjoy in the confines of this adorable space near the beach where Julian Cox and Josh Goldman’s cocktails shine. You’ll be coming here as much for the cocktails as for the food you order. You can find the 3-course prix fixe menu here. West L.A. 4) The 4-course, $40 tasting menu dinner at Fundamental L.A. Truth be told, the dineL.A. deal isn’t any less expensive than the already terrific deal you can get the rest of the year, but it’s worth noting that the seasonal cooking at Philip Pretty’s Westwood restaurant is worth revisiting exactly for that reason. Everything is likely different from the last time you visited. And besides, foie gras is legal now. You might as well also go for the $18 wine pairing. 5) The $40, 4-course dinner at The Wallace Run the gamut at Culver City’s The Wallace, from jarred treasures like Smoked Trout to a strangely addictive vegetable course. Move on to a main feature featuring the land (Fried Mary’s Chicken) or sea (Alaskan Cod), and finally finishing out, of course, with dessert, such as a Salted Caramel Pudding. A cocktail by Greg Bryson will surely complement the food nicely. South Bay 6) The 4-course, $50 dinner at The Strand House The Strand House is most certainly one of the only places to eat in Los Angeles where you can enjoy the food while also enjoying beachfront scenery. With re-imagined, traditional dishes by Chef Greg Hozinsky on the main menu and one-offs by guest chefs during their Culinary Masters Series, The Strand House has become a Manhattan Beach destination. Their dineL.A. effort also goes above and beyond by including a starter, pasta, main course, as well as dessert for $40. A main course on the regular menu would be nearly that much, alone. [caption width=“1024” align=“aligncenter”] 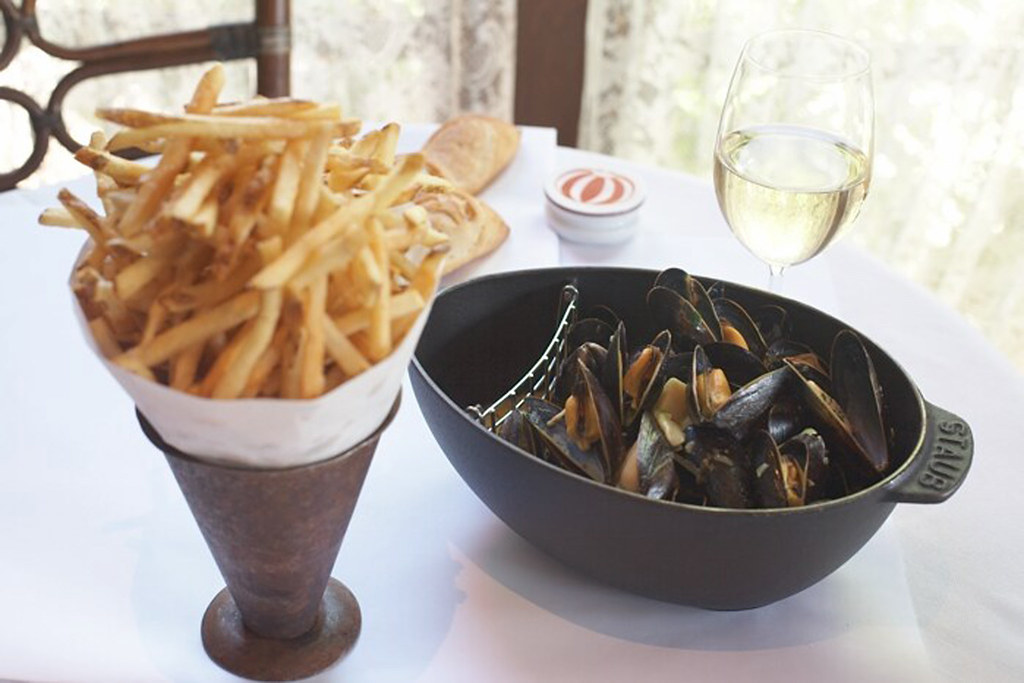 Moules au Safran at Bouchon[/caption] Beverly Hills/Century City 7) The 2-course, $25 lunch and 3-course, $50 dinner at Craft As one of the long standing stellar - but pricier - dining options around town, Tom Colicchio’s Craft is offering prime dineL.A. opportunities to enjoy their food at deep discounts. Lunch entrees regularly start at the price of their Restaurant Week deal. Dinner entrees are easily in the mid-$30’s price range, which makes their Restaurant Week deal extra appetizing - and you have a selection of 7 mains to choose from, to boot. 8) The 3-course, $25 lunch at Bouchon Whether you go for lunch or dinner, Bouchon’s Restaurant Week deal is 3 courses, so for the best deal, you’ll want to make it for lunch. Start with a soup or salad and move on to classic Plats Principaux such as Croque Madame, Moules au Safran, Gnudi or Cassoulet with a $10 supplement. Top it all off with Valrhona Chocolate Brownies or Meyer Lemon Bar. 9) The 3-course, $40 dinner including the dineL.A. exclusive Lamb Spezzatino with lemon & egg semolina at Sotto A night at Sotto with Steve Samson’s cooking is always a winner, so when you get 3 courses for $40 while dining with friends so everyone can share? A real stunner. From Pork Meatballs to the exclusive Lamb Spezzatino, Rigatoni with Chicken Liver Ragu and ending with a Cannoli or Olive Oil Cake, all diners at the table are in for a treat. West Hollywood 10) The 3-course, $25 lunch at Connie & Ted’s It’s hard to top a three-part lunch for $25, with the first course including the choice of a half-dozen chef’s choice oysters. The choice of second course includes their Hook Burger, Fried Oyster Sandwich and more for some impressive dineL.A. options. On the other hand, if you’re into the Lobster Roll, you’ll have to opt for the $40 dinner, plus the $5 supplement. 11) Night + Market Song offerings at Night + Market WeHo for $40 dinner and wine pairing for add’l $35 Kris Yenbamroong brings favorites from Night + Market’s new Song location in Silver Lake back to where it all started, in West Hollywood. Score three courses for $40, including fried octopus and pork khao soi, and you’ll want to add in the pairing, for sure, with delightful gems such as a Pinot Blanc and Litrozzo Rosso. 12) The $20 lunch and $30 dinner at Gracias Madre Vegans and non-vegans, rejoice! You’re in for a gluten-free treat where everybody’s happy because somehow it’s all pretty delicious even if you’re without dietary restriction. Sweeten the deal by adding an agave-based cocktail, or even flight, by Jason Eisner. Repeat: The lobster roll at Blue Plate Oysterette on 3rd Street (see Santa Monica entry) [caption width=“1024” align=“aligncenter”] 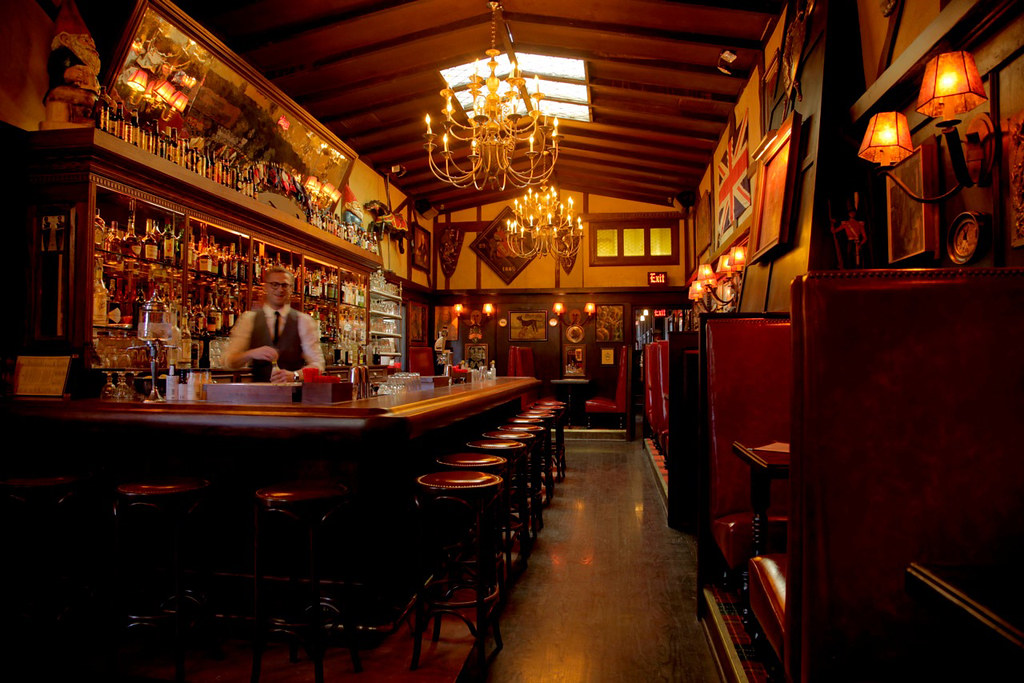 The Pikey Pub Room[/caption] Hollywood 13) Five plates per person for $30 dinner at Cleo Cleo is a great place to graze on plates of capable Mediterranean fare for a night out on the town with the girls. With a choice of two mezze, salad, main and dessert per person for only $30, it’s too fun not to share. The fantastically stylish space is designed by photographer and film-maker Matthew Rolston, so if you’re not at least a little in it for the scene, you might want to take dineL.A. off Hollywood Boulevard. This is SBE, after all. 14) The 4-course, $50 dinner at Rao’s Truth be told: I’ve never been to Rao’s. But if there were ever an occasion to indulge one’s curiosity about the Hollywood outpost of the notoriously star-studded, New York restaurant, it might as well be dineL.A. You get an appetizer, a pasta, an entree, and then a closing cannoli, probably all worth about $75-$100 per person. And then you can say you’ve gone. 15) Two-course English lunch by Chef Ralph Johnson for $20 or three-course dinner for $40 at The Pikey Take it from the chef with numerous top London restaurants and New York’s The Spotted Pig on his resume. Make the deal even sweeter with a dram of whisky from a closed distillery from owner Jared’s vintage stash. Repeat for dinner, not necessarily on the same day. [caption width=“1024” align=“aligncenter”] 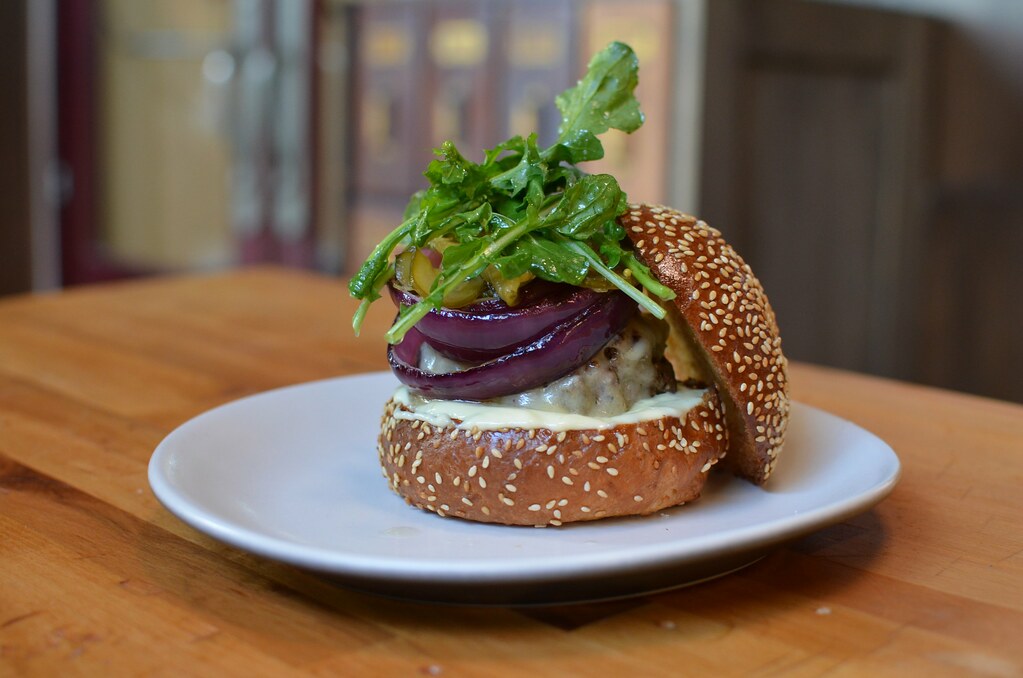 The Burger at Butchers & Barbers[/caption] 16) Dinner for $40 at Butchers & Barbers Now is as good a time as any to check out the Houston Brothers’ new-ish Butchers & Barbers in Hollywood, with American comfort food by Luke Reyes. Delicious cocktails complement the menu, of course, with this being the brothers’ first restaurant effort after having successfully built a high end cocktail empire in and around the neighborhood. The 3-course dinner for $40 including an exclusive crispy duck breast sounds more than promising. San Fernando Valley 17) The 6-course tasting menu at The Gadarene Swine One of the hottest restaurants to hit L.A. happens to be a vegan fine dining effort by Phillip Frankland Lee, and for $50, you’ll get a 6-course tasting menu. It’s quite the steal and promises to be an innovative dining experience, whether you’re vegan or not. Silver Lake 18) The Potato Tartine with black truffles at Cliff’s Edge Chef Vartan Abgaryan has an exclusive dish to offer for their 3-course, $50 dinner offer, and there’s a good chance that, like his other cooking, it’s going to be as beautiful as it is delicious. The Potato Tartine uses Morbier cheese, black truffles and mushroom vinegar. Pair that with a cocktail or two by Richard Swan either in their rustic interiors or out on Cliff’s Edge charming patio and you’re golden. 19) Dinner for $30 at Alimento It’s one of my favorite newcomers this year, so dineL.A. is another grand opportunity to partake in this place if you haven’t experienced it, already. Spoiler Alert: You’ll definitely want the Tortellini en Brodo whether it’s on the prix fixe menu, or not. But almost everything on Zach Pollack’s menu is pretty spectacular - including their Chicken Liver Crostone. 20) Dinner for $40 at Black Hogg You get a choice of 2 small plates and 1 large plate per person, which is a great deal. Prepare for really robust flavors in these American dishes with Korean influences, in Eric Park’s gastropub to outlast them all. Bone marrow lovers (me) will rejoice. Then, go across the street for an after-dinner show at Silverlake Lounge for some added adventure. Downtown L.A. 21) The 3-course, $25 lunch and 4-course, $50 dinner at Faith & Flower If you work downtown, this will be the lunch to get - especially since they’ve had awhile to streamline their lunch service since opening 10 months ago. Selected cocktails by Michael Lay are $10 each, as well, to sweeten the deal. Michael Hung’s menu at Faith & Flower has consistently been at the top of its game. *** Don’t forget to “Dine. Snap. Win.” when you’re instagramming. Tag your photos with “#dineLA” and you’ll be entered to win a 2-night stay at the Langham Hotel in Pasadena with breakfast and valet. And with that, I have just two parting tips to share for ultimate #dineLA etiquette: 1) Please instagram after you’ve eaten some hot food, or even after the meal - not beforehand so that your food isn’t hot anymore! 2) Do tip on the full value of the meal, because your food is most likely valued more than what you were actually charged for it. Don’t penalize your server for the great deal you got! Now make those ressies, and enjoy!