Troublemaker For A Day

I decided to take the opportunity this week to play hooky from work to pose like a Weezer fan and participate in the video shoot of Troublemaker. And I’ll be honest here: I like the band but I haven’t really loved ‘em. I guess the disadvantage bands might have with me is that when they achieve instant commercial success from the debut album, I’m never given the chance to get intimate with their music privately. My possessive self has to deal with sharing the music with everyone and their mother - including people who wouldn’t ordinarily be scoping out the “good” music from the mediocre. 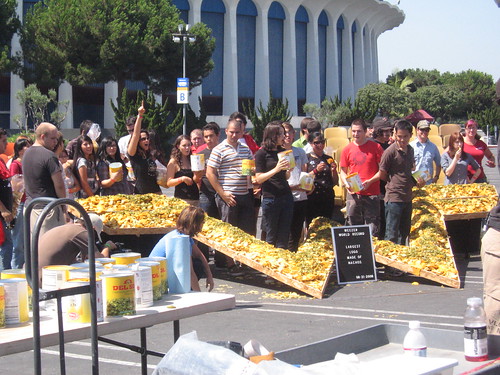 This =W= holds the world record for the largest logo made of nachos.

Then again, I think about it and realize that sometimes that’s the ungrateful L.A. scenester in me. Because that’s only been true since I’ve become local to this area. “So many things to do, so many bands to see,” as they say. So while you could also argue that the music scene is a little bit diluted in L.A., there’s always a silver lining when you come to events like these and get the chance to observe the diehard fans in all their glory. I noticed fans drove all the way from Sacramento to be a part of this shoot, even Las Vegas. And we only got the confirmation email the day before.

Anyway, Weezer is one of those bands that first achieved success before I had even convinced myself that the best music was the stuff I could lick up from import magazines and the DJ store in downtown Milwaukee. I got sucked into their first two albums, noticed an additional single hit or two along the way as it was - while hearing Rivers got all experimental for awhile and kind of respected that - and that was good enough for me.

The shoot was for the single Troublemaker and by the end of the day I had heard it played-back and seen it lip-synced a total of 30 times. It might seem glamorous and everything, but I can’t think of a more burdensome chore for a shy musician signed to a label than lip-syncing and faking like you’re performing. Of course, that was exactly what I came to see.

They told the fans to bring instruments to participate in the Hootenanny by playing along to the song with the band. And so, in the holding area, everyone sang and played along to their favorite songs under the tent. It was cool sharing a little of that bliss they were experiencing just from being there. 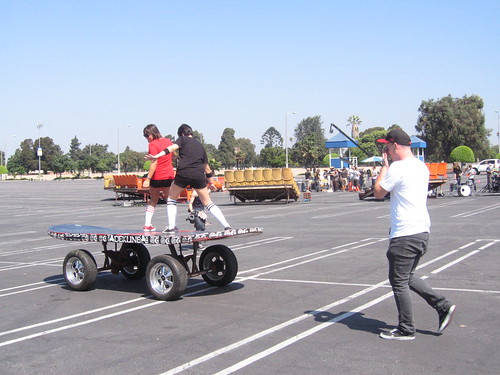 Troublemaker isn’t my favorite song and the fact that the verses are entirely made up of two notes drives me crazy, but heck if I wasn’t going to take advantage of the fact that it was an opportunity to be a part of breaking (making) a bunch of obscure Guinness Book of World Records no one even knew existed. (Yeah, I believe they even said it was official.)

At one point while playing dodgeball, I got whooped on my arse pretty good. At another point, the huge red ball landed on my finger thereby jamming it and making it grow huger and huger at the knuckle. Meh.

Probably the coolest thing about it was just hanging out in the vicinity of Weezer themselves in all their lip-syncing glory. They all look like they’re in great shape still, with Rivers definitely bringing the most intense vibe. Patrick, Brian and Scott were really cool about hanging out and seemed at ease with everyone else.

I skipped out before the last shot of the day, which was the world record-setting largest custard pie fight.

Yeah, I guess I cheated. I left it up to the real fans to get down and dirty. ;)

To hear the Troublemaker single, you can check the front page of the Official =W= site.

Other reading: Weezer on Wikipedia