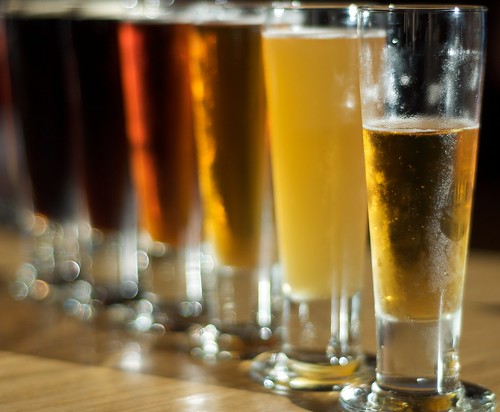 Photo credit to djdphotos on Flickr[/caption] Beer cocktails. Beer floats. Sour beers. All-you-can-drink beer. Beer crawl set to music. Crappy-for-happy beer trades. Prickly pear beers from all over town. Los Angeles is comin’ up beer. And in its 4th year, not only is LA Beer Week bigger and better than ever, it’s also more unified. The camaraderie around the LA beer community is unmistakable - so get ready to drink some tasty brews while learning a lot and meeting some cool people along the way. After perusing the 10-day schedule, I’ve come up with a few events I’d personally want to attend. With the LA beer scene at the strongest it has ever been, there’s bound to be some (or a lot of) conflicts during this extravaganza, but all we can do is do our best, right? While you’re at it, you might as well check off the four quandrants of this LA Beer Week Bucket List. Then, bring your four stickers to the LA Beer Week Festival on September 30th and get a free bottle of the official beer of the week, Unity, from Eagle Rock Brewery - a play on a traditional Berliner Weiss, yet jazzed up with a touch of rye as well as red and green prickly pear. You’ll also get to enter a drawing for tickets to the BAM Fest on October 6th in Santa Monica. (If you don’t complete the bucket list, never fear - it’ll be on draft at select retailers throughout Los Angeles and Orange county as well as at the LA Beer Week Festival itself.) Without further ado, here are my Top Ten of LA Beer Week: 1. Thursday, September 20 (7-9:30 PM): Stone Total Town Takeover in Pasadena Stone Brewing Co. will preview its soon-to-open Stone Company Store. Co-founders Steve Wagner & greg Koch will be sharing special beers and nibbles from Stone with live music. $25 per person, with proceeds to a local charity. 2. Thursday, September 20 (6 PM): Dogfish Head Craft Brewery Invades Little Tokyo Far Bar, the bar in Little Tokyo, will be pouring 12 beers from Dogfish Head, including some very rare and hard-to-get selections. In addition, an extra special treat will be running through the “organoleptic hop transducer module”… better known to Dogfish Head fans as Randall the Enamel Animal. 3. Saturday, September 22 (1:30 - 10 PM): Walker’s Wild Ride [caption id=“” align=“alignright” width=“240”] 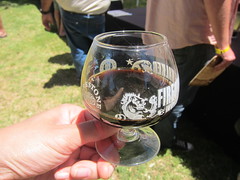 Firestone Walker[/caption] While sour beers aren’t for everyone, I’m definitely fan of a pucker-up pour. Good thing David Walker and Jim “Sour Jim” Crooks are loading up David’s ’55 Land Rover with 5 sour beers from Firestone Walker’s new Barrelworks facility before making their way to 5 L.A. craft beer bars. Which beer is poured at each location is up to the draw. You’ll find them here throughout Saturday:

4. Sunday, September 23 (10 AM - 1 PM): Brewer’s Brunch Eagle Rock Brewery is open for brunch (cooked up by resident chef Jerry Su) especially for a chat with the owners and brewers. Entry is only $15 and includes two beers, food and a keepsake pint glass. 5. Sunday, September 23 (All day): Craft for Crap Beer Belly wants you to educate your friend who, somehow, still drinks crappy beers. Thank god he or she has YOU as a friend to bring ‘em along to Beer Belly. Trade one of the crap beers from the fridge and trade up for a craft beer, at the low, low price of one cent. 6. Sunday, September 23 (4 - 8 PM): Beauty of the Barrel [caption id=“” align=“alignright” width=“240”] 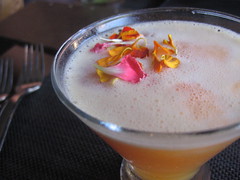 Beer Cocktail[/caption] As if beer weren’t enough, The Victorian in Santa Monica has partnered with Brew Something LA to help you enjoy both barrel-aged spirits and barrel-aged beers at the same time. Beers from Hangar 24, Meantime, Bockor, Drake’s, The Bruery, Ballast Point and Ladyface will be available. Tickets are $40; net proceeds go to benefit The Virginia Avenue Project. The highlight will undoubtedly be unique cocktails featuring barrel-aged spirits from these guys: 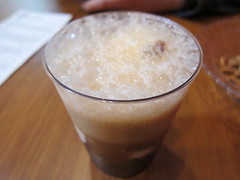 Beer Float[/caption] FoodGPS.com’s Josh Lurie, for the 4th time, has assembled 5 teams of top L.A. chefs and local breweries to collaborate on creating the ultimate beer float at Golden Road Brewing. Come taste and vote for your favorite. Tickets are $35; VIP $45 for an early entry. A portion of the proceeds will benefit The Pablove Foundation. 10. Sunday, September 30 (12 - 4 PM): LA Beer Week Festival The signature closing festivities for LA Beer Week is, really, not to be missed. Over 70 breweries will be in attendance at Union Station, pouring unlimited 4 oz. samples of their goodies alongside food trucks and local artisans, whom will be serving food to cushion all your beer. Tickets are $50; net proceeds benefit The Spero Foundation, The LA Brewers Guild, and the Glassell Park Recreation Center. With L.A. Beer Week launching on Thursday, you best be getting your schedule together for 10 days of fun. I’ll see you around town!