To Fall The Right Way 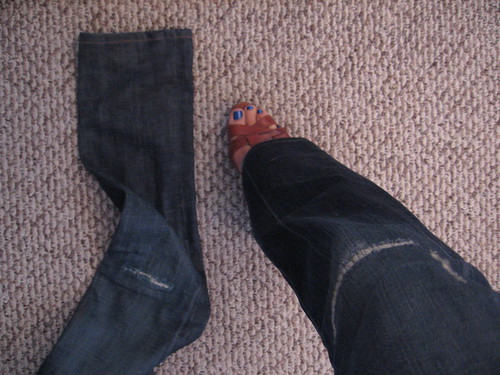 I have a few pairs of jeans that I’ve had to fix in the right knee. I guess it’s kind of like guys and their workshirts. The elbows wear down because they slideÂ their arms around on the desk. With me and jeans, though, the holes I’ve managed to put in those pantsÂ is caused by merely falling. On concrete. I’m all right in the athletics department. I’m not in my top form at the present, but then again I doubt I’ll ever run another Marathon. I’m keeping it mostly to yoga and snowboarding for now, with some cardio in between when I’m not feeling lazy. But I’m here to tell you that being athletic doesn’t mean you’re not a klutz. Could beÂ the platformÂ shoes. Or the pushy crowds. Or the beer (the pant leg repair on the left was from Oktoberfest in Munich).Â Or all. Or just the fact that I’m simply a klutz. No matter what, I’m always falling the same way, putting the hole in my right pant leg at the knee. It’s as if I’ve choreographed my fall, orchestrated even my missteps - to put my right knee forward every single time. So I do it the same way over and over again. Falling happens to meÂ often enough to notice the pattern. Old habits die hard. I’m extremely right-handed in all things, not just falling. Hillary, a yoga teacher of mine, pointed out once that my right foot tends to turn out more when I stand - and therefore also when I walk. And run - since that’s where I’m experiencing my patellofemoral (knee) pain when I run more than a couple miles. It means that I work that side more overall, unfortunately to the point where I’m working it too hard. I am also a regular, not goofy, stance on a snowboard. That means my right foot steers and is in the back. And I’m a rightie in all things - I don’t need to turn the toy guitar over when I’m rockin’ out on Guitar Hero. I also have two different contact prescriptions in my eyes, and again I have ocular dominance in the right as well (I believe). The weakerÂ prescription is in my right eye - which means that my right eye has better vision. I don’t know if this means that I’m also using my right eye more than my left and that’s why it’s sharper, or that my left eye is not as sharp because I use it so much more. I’ve had lefty envy and especially ambidextrous envy. I’d like to have a strength or favor a sideÂ that most others don’t. In the grand scheme of things it doesn’t matter much but the thing about being ambidextrous is that you are not only equal in skill on both sides - you don’t have a weak side. Then again, a lot of our thinking tends to gravitate towards eliminating or managing weaknesses instead of celebrating our strengths, or fleshing out a way to maximize them to our advantage. Instead, we’re so focused on the negatives and minimizing the damage those weaknesses employ. So in keeping with the theme of accepting myself as I am, I’veÂ accepted that I’m just another ordinaryÂ right-hander. I doubt I’ll ever stop falling on the sidewalk or on the pavement - it doesn’t really matter that it’s onto my right knee. If I’m aiming towards the middle, I’ll remember that I favor the right (non-politically) and try to aim more towards the left, to compensate. Besides, the right knee patches give my pants and jeans character.