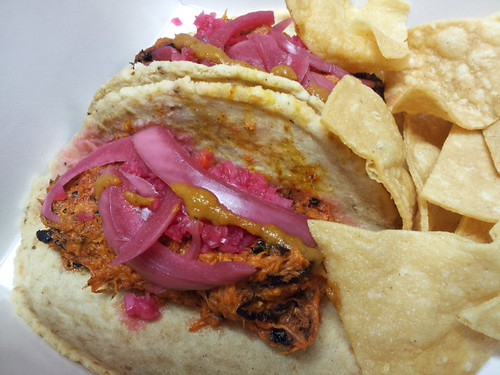 [/caption] With my 9 to 5 located west of Miracle Mile, I’ve had more than my fair share of lunch option challenges. Though many scoff at the food truck phenomenon that seems to never run out of steam, it’s actually been the first silver liningÂ  I’ve had since I’ve resigned to witnessing the vast majority of my coworkers with Trimana sandwichesÂ at their desks around noontime. [caption id=“” align=“alignright” width=“240” caption=“Grilled Cumin & Garlic Rubbed Pork Loin - $6.50”] 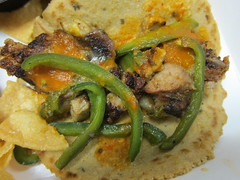 [/caption] Thanks to Pat of Eating LA for the tip-off on Tinga on La Brea and thanks to Blackboard Eats for offering their dine-in only lunch 30%-off code last week. Well, I’ve still yet to use it, since I’ve been theÂ take-awayÂ supplier to a coupleÂ coworkersÂ weaning themselves off tuna salad.Â (Proof that Blackboard Eats PR works?) However, the memory of a particular taco plate compostable cardboard box ($7-9 for two tacos and chips) will forever be a chapter in my book of office follies, and the Cochinita Pibil tacos are to blame. Or thank. The advice I can offer here is to, upon finishing both theseÂ tacos, go to the bathroom and wash your hands five times. Do not rub your nose with your cross-contaminated, salsa-stained forehand. Do notÂ wipeÂ your forehead, either. Do not pass Go. Not quite sure where that salsa is? A tingling sensation (dubbed: The Tinga Tingle)Â on any given extremity will tell you for sure. But like I said, best wash your hands in case your curiosity does not feel the need to be satiated. Put it in your stomach, instead. [caption id=“” align=“alignleft” width=“240” caption=“Chorizo Quesadilla (with goat cheese, pickled red onions) - $9.50”] 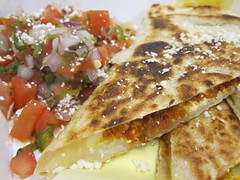 [/caption] My upper lip and the skin lining my nostrilsÂ burned til 4 o’clock. The ego behind my heat-bearing palate became even more defeated when, after doing a search, I found Jonathan Gold made no mention of this salsa when he mentioned these very tacos in his write-up back in September. No matter. Egos aside, deliciousness typically transcends pure heat. I take that back:Â Bearable heat, anyway, because that burning sensation on my face for the duration of the afternoon sure was distracting. But I digress I’m beating the dead horse. The other favorite pork dish on their menu was definitely the Grilled Cumin & Garlic Rubbed Pork Loin Tacos ($6.50), served with pepper jack cheese, pasillas and salsa. The Flat Iron Steak Tacos ($8.50) came in chipotle tortillas and topped with tomato avocado relish, “dog snout” salsa, pickled red onions, queso fresco and lime chipotle Escabeche. The strips of steak were really the best cuts I’ve had of anyÂ fresh mex in memory. [caption id=“” align=“alignright” width=“240” caption=“48 Short Rib - $8.50”] 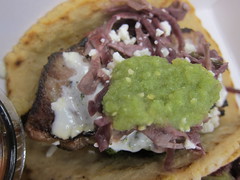 [/caption] And the quesadilla was amazingly still crisp by the time it got to our destination. The goat cheese melted with chorizo in a quesadilla is perhaps blasphemous to the most diehard of diehards but a nonetheless a brilliant combination. Though I’ve yet to try many of the sides, the Arroz Con Crema ($5) came deliciously roasted and coveredÂ with a not-too-sweet cream. Lime juice is to thank for its twist and tang. Next up: The Dirty Horchata, or horchata with a shot of espresso in it. I’m guessing it’ll be the refreshment to accompany my first dine-in experience at Tinga. There are plenty of other menu selections I’m dying to try, so I’m certainly looking forward to the next adventure a glass of that stuff will be washing down. Though I’m loath to call Tinga “Fresh Mex,” I think I’m already too late. I apologize for the Baja Fresh associations, because Tinga is so much, much more than that. Their food is creative, colorful and best of all, absolutely delicious. It’s a welcome departure from the $1 tacos of York and Breed Street because they’re not even in the same class. Contemporary decor, check. Compostable wares, check. This is Fresh Mex worth appreciating. All taco plates come with 2 tacos and chips.