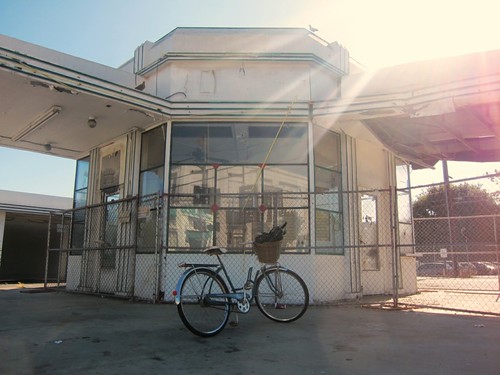 Bicycling Los Angeles[/caption] People do walk in L.A., but - let’s be honest - they mostly still don’t. People drive alone, and they carpool. They vanpool and they shuttle. They ride their bikes. They Über or Taxi Magic all over town. And yes, we Metro railway. Do you ever get the feeling that just because we’re not New York, that’s the only thing they’re rubbing our noses in? Which is not to say that I’m not envious of their subway access - and many other things. Yet having passed the 2-year mark living near a Hollywood Metro Red Line stop, I’ve learned a lot in the process about our own public transportation options. The Expo Line has opened during that time. And we’re looking forward to more.  Just experiencing the drastic transformation in how people choose to get around - myself included, and not only on the rail - have provided so many eye-opening revelations. So when Slate says that L.A. is being turned into “America’s next great mass-transit city,” we’ll take that little bit of validation.  [caption id=“” align=“alignright” width=“180”] 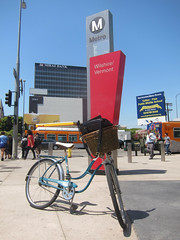 Vermont and Wilshire with my bike![/caption] The traffic-numbed Angeleno has been my favorite stereotype to thwart since my own transplantation. Recently, I re-encountered some college acquaintances who have since settled down in Orange County and for whom it was unfathomable that I would choose to live in filthy Hollywood. “Because I can walk or bike around my own neighborhood and get downtown on the subway.” The response? “What’s downtown?” What they didn’t also ask was, “What’s in Hollywood besides the tacky stuff?” I hope I’ve covered both of those, to date, on this blog. While I’ve only just had the bike for a few months (a ‘60s, single-speed, vintage bike acquired in Joshua Tree, mind you), here are a few tips I’ve gathered to getting around without that encasing hunk of metal - if your plans can at all call for it.

Did you promise to visit your west-of-405 friend sometime during the weekend, but also have plans to catch spots in Culver City, Pasadena and/or Downtown? Divvy up the latter three into one day and any west-of-405 plans into another so you can save one day for transit riding and another for your car. By the way, Androids rule. 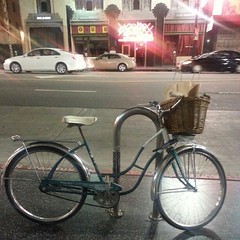 Driving towards Downtown L.A. is one of the most unpredictible traffic anomalies thanks to the many venues and thus events. Street parking is potentially scarce and lot parking most definitely expensive. I’ve had same-day plans downtown and in Glendale, before, and it was worth it just to drive to a Silver Lake Metro Red Line stop, park the car on the street, so I’d be ready to hope in the car and drive towards Glendale after riding back on the rail from Downtown LA. Whilst avoiding horrendous simultaneous triathalon and Carmageddon II traffic during LA Beer Week Festival, Caroline parked at a Culver City Expo station and rode in to Union Station - in an air-conditioned car. More than worth it!

If I feel like riding to the station instead of walking, I’ll ride to the Metro stop with bike racks (Hollywood/Vine) and lock it up there while avoiding the one with SpongeBob SquarePants, Spiderman and Pirate Johnny Depp (Hollywood/Highland) - even if it is a little closer. Usually I’ll be OK getting around downtown on foot. Read up on biking on the Metro and even follow @bikemetro on Twitter so you’re always in-the-know. 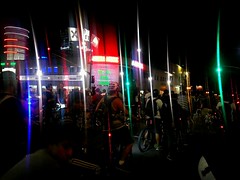 Catching Critical Mass for 2 blocks on my ride home from the subway last week.[/caption]

Hitching a one-way ride off a friend still lessens your carbon footprint (and $1.50) than hitching no rides. There have been lots of times where I’ll meet up with someone downtown and get dropped off at home or the nearest stop for an easy jaunt home.

This is how I get to LAX if I have just one carry-on, despite that it makes my route a triangle. Plus, I don’t have to bother anybody for a ride.

Past our carbon footprints and going green, sometimes going Metro and/or riding a bike is just plain smart, cost-effective and healthy. I can’t wait for more rails to break ground and get running. We’ll have this sprawling landscape of a city that we call home that much easier to navigate.