The Yacht Club in Echo Park 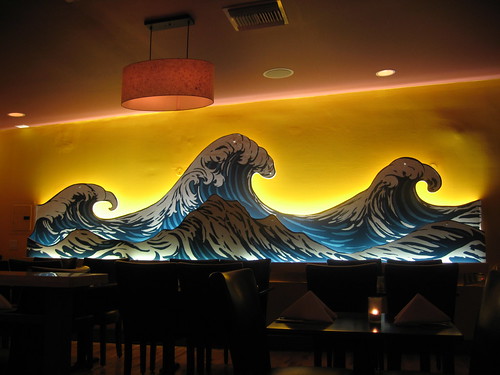 If you’re an Eastsider and so much as wanted to have a neighborhood place to crash with a handful of small plates and glass of wine - you’re probably the kinda guy or gal Bill and Charles had in mind while launching their restaurant, Allston Yacht Club. They’re a pair of guys in entertainment who’ve been fulfilled to a good degree in one of their two dreams (the writing side). Allston Yacht Club - named after a Boston neighborhood by this, these couple of Bostonians, is the realization of that second dream. It was first opened last January and from what I understand has undergone significant yet effective growing pains. I had the privilege of a private tasting to learn what their venture was all about. They were super entertaining and a pleasure to share food with.

Yes, yacht club - in Echo Park. It takes no chances with letting you know they don’t take themselves seriously so you shan’t, either. But seriously - these guys are cool. Thank god - because hanging out at The Allston is like hanging out in their living room. And who wants to be in a living room inhabited by uncool anybody?

The good news is that the vast majority of plates are within the $6-8 range so this is a great place to come here with friends, order a bunch of plates (designated by main meat dishes), snacks (smaller, non-meat plates) and/or sides (greens) and everyone gets to sample a little of everything. 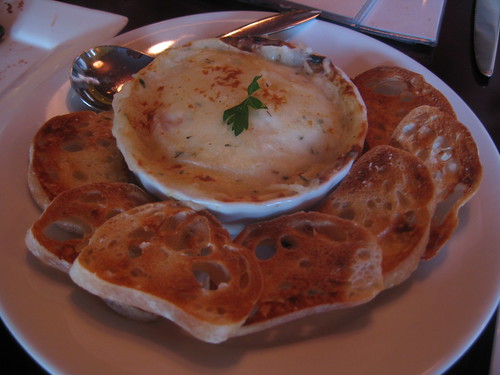 Off the “snacks” menu, where mostly everything is $6, I enjoyed the Brandade the most. A lot of the appeal went to the creamy texture of the cheese complimented by the salty cod and tomatoes on the bottom of the dish - made perfect by being served spread on crustinis. The grilled cheese, however, was a little more complicated than how I prefer mine to be - more traditional. It was decadent, though - so maybe it was just because it made me feel a bit guilty. ;)

I found the most solid fish plate on the menu to be the cedar plank-grilled salmon. The brussel sprouts, however, were dished a tad salty. A pleasant surprise was the mushroom risotto, which isn’t on the permanent menu but was one of the specials they were offering. It was creamy and reduced just right.

The short ribs - prepared in the smoker out in the back of the restaurant - were excellent.Â The braised pork belly was goodÂ but I enjoyed the ribs more. In general I’d stick to the fish, ribs and snack dishes Allston offers.

As for the cocktails - the good and probably bad of it is that the first cocktail I ordered was my favorite and so I stuck with a good thing instead of trying the others. This also includes my not trying anything off the wine list - which, looking back, seems intriguing with a a selection from a variety of regions. So I can heartily recommend the Hub of the Universe off their cocktail menu but can’t offer a second suggestion. Not too sweet and pleasantly citrusy. In the end, I had three for the count and I think it’s a perfect summer drink.

The warm ambiance Bill and Charles have cultivated in the space make for a pleasant experience. It’s effectively casual if need-be. I can get behind the organic, homey feel they’re aiming for. From what it looks like they seem committed to making the improvements necessary to make an establishment as this successful in the middle of a recession and have already made strides doing so. I can only seeÂ theÂ spaceÂ getting better and more enjoyable as it starts to fill out more…