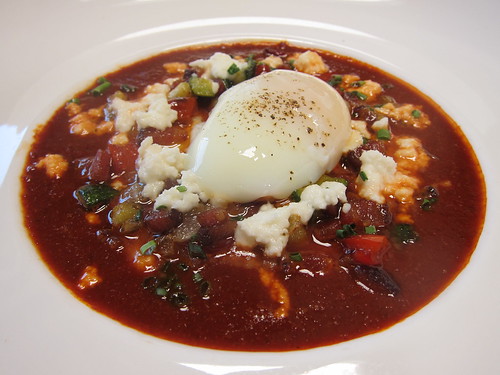 [/caption] There may be many a nightowl in the circles I run, but I still can’t remember the last time I heard or read about breakfast. Brunch is the meal of leisure over sustenance and a time when friends can order eggs or sandwiches. Brunch makes it okay to drink before noon. And brunch brings purpose to sleeping in on a weekend morning. [caption id=“” align=“alignright” width=“240” caption=“Blue Corn Muffins”] 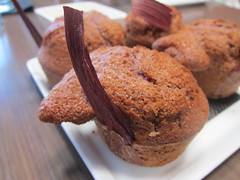 [/caption] Enter Playa Rivera, Chef John Sedlar’s newest venture in the space that was formerly Grace. While dinner service may be pricey for some, Playa’s brunch menu (in lieu of happy hour) is a great foray into Sedlar’s Santa Fe-influenced cuisine. Entrees range from $10-15, with no shortage of the chef’s artistic expression - or cinematic appreciation, for that matter (you may find a scene from Clockwork Orange beneath your Tamal). But do not start with the entree.Â The don’t-miss at Playa Rivera’s brunch is the blue corn muffins, which areÂ made withÂ organic cornmeal and furnished with almond butter (I could’ve spread that butter on anything). And if you do order a cocktail, be sure you look at Julian Cox’sÂ fullÂ selection before you autopilot that bloody mary or mimosa. The sangria is no ordinary sangria, but a complex cocktail with a hint of sour. It’s so good! [caption id=“” align=“alignleft” width=“240” caption=“Duck Hash ($14)”] 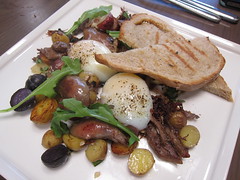 [/caption] As for the entrees, IÂ have resigned to the fact thatÂ in early-day weekend meals, eggsÂ are king. In a recent episode of “Ladies Who Brunch” at Playa,Â I sorely wished that my Croque Monsieur Senor was a Senorita. The layers of chorizo and queso in each biteÂ were really good, but when the eggs on three other plates waver at you with their perfectly poached,Â sunny and easy yolks, you can’t help but become envious. The duck hash was one such example as two round eggs stood against a colorful plate of potatoes, delicious dark meat and arugula. It was as beautiful a display of savory as it was tasty. For those more Santa Fe-inclined, go with one of the red chile-laden dishes, such as the Huevos Polenta. Once I was finished with my sandwich, I couldn’t help but steal spoonful after spoonful of Maya’s dish. Sedlar’s red chile really is that good, and dare I include “authentic.” (I am no expert, though I did enjoy a blitz in chile education during a weekend trip to Santa Fe with other food bloggers a year ago, in which we were lucky enough to observe Sedlar in his native environmental and culinary elements.)Â Ladled over theÂ top of a bed of polenta, the red chile just makes for a super delicious soup. [caption id=“” align=“alignright” width=“240” caption=“Ice Cream Sundae ($7)”] 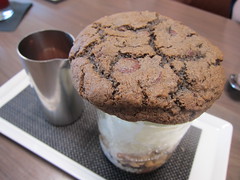 [/caption] If you’re feeling like a tamale, you can enjoy that same redÂ chileÂ atop the Tamal - that of which are topped by some beautiful, sunny-side up eggs. Yes, you get the Clockwork Orange mural, as well. (In the latest series of dish art at Playa, expect a controversial radioactive theme - an homage to the chef’s native New Mexico.) But just like the muffins, you best not miss dessert. The Sundae comes with a blue corn chocolate chip on a jar with goat’s milk ice cream, cocoanibs, hazelnuts as well as hazelnut syrup. If the blue corn muffins were mind-blowing, the dessert rendition is really the icing on the blue corn cake. With just one experience under my belt,Â Playa Rivera brunch is in the ranks of being one of my favorite brunches in town. It won’t break the bank and isn’t one of your standard issue pancake-waffle breakfasts over mimosas. Not that those are necessarily a bad thing, but it’s a good idea to change the pace - and the cuisine - when the results come out this good.