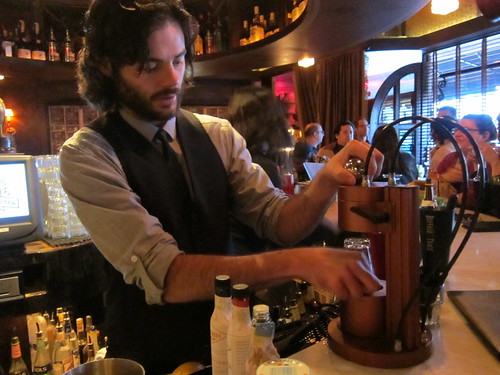 [/caption] We seem to love animals here in Los Angeles. So much perhaps that we tend to project our own longings and qualities upon the poor creatures when anthropomorphizing animals on the internet naming our food and drink establishments. There’s a Hungry Cat, a Surly Goat and now - The Thirsty Crow. [caption id=“” align=“alignleft” width=“180” caption=“1936 Jukebox - $0.05 per play, selection of 12 songs”] 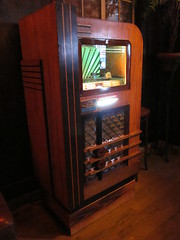 [/caption] As long as the drinks are solid and the space has character, I can get behind almost any name. Fortunately, The Thirsty Crow - a bourbon bar from Bobby Green (1933 Group: Bigfoot Lodge, Bigfoot West, The Little Cave, Saints & Sinners) - manages to do both. This is a far cry from Stinkers and skunk butts, mind youÂ - andÂ comprises more “hip” than “hipster” in this Silver LakeÂ neighborhood withÂ The Crow’sÂ upscale, quality $12 cocktails. It may be a bar, but it’s now more La Mill (especially withÂ their new liquor license) than Cha Cha Lounge, though PBR alsoÂ is available here. The last timeÂ I saw an ice ball machine was not even in-house, but duringÂ the traveling Macallan presentation. ClienteleÂ with cocktails chilled with the rounded iceÂ benefit from the surface area in their Old Fashioned glasses slowing its melt rate - upscale, indeed. [caption id=“” align=“alignright” width=“240” caption=“Sazerac”] 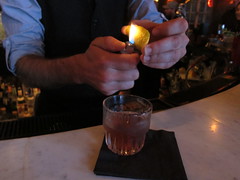 [/caption] At the media preview, we could taste anything and everything from the menu, and I found myself especially impressed with their classics. I started off with a Mint Julep - made with Maker’s Mark - and it was quite good. Despite the presence of confectioner’s sugar, it wasn’t too sweet, had a good muddling of mint and was appropriately complimentary to the bourbon composing the drink. It was a good pour. The Sazerac made by Don was also very good - a delicious, aromatic classic blend with a clean finish. Made with Jim Beam, Peychaud’s bitters, Grande Absinthe, a touch of sugar and flamed lemon peel. I’ve never been to New Orleans, but I like any city that has popularized this (albeit originally cognac)Â cocktail. The popular drink of the media night, however, seemed to be the bar’s namesake cocktail.Â Gin with ginger beer renditionsÂ may beÂ prevalent all around town - but the Jim Beam Rye at the center of the Thirsty CrowÂ (which Lindsay and Daniel ordered) made for good spice in combination with the ginger beer, bitters and citrus. I love that there is a Manhattan section on the menu - and in turn loved their Black Manhattan. It was dark and delicious. I would caution against the Mole Manhattan, however, as Caroline had understandably ordered it because she had expected it to be influenced at least in part by the Mexican ingredient. Not quite - the drink was more chocolatey sweet than Mole Poblano. [caption id=“” align=“aligncenter” width=“500” caption=“The Seelbach (Bookers bourbon, citrus, sparkling wine)”] 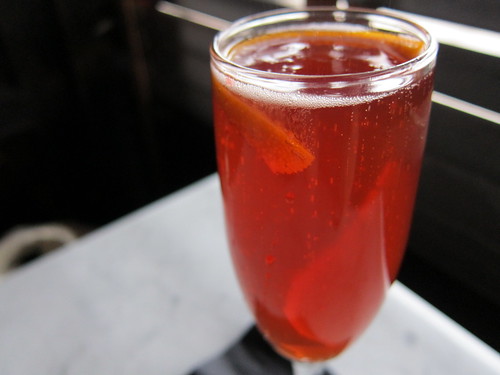 [/caption] And here is where I contradict myself on said classics - but what is a specialty spirit-centered bar without a selection of bubbly cocktails? I say this having never had a bubbly bourbon (or whiskey, for that matter) cocktail. So the sip I took of Caroline’s Seelbach was a surprise, but extremely tasty and resembled a combo I could see myself get acquainted with. After all, we all have that girlfriend who orders champagneÂ everywhere she goesÂ - making the bubbles brawny would be a perfect compromise for any whiskey lover. Now I know where I’m taking her, next. [caption id=“” align=“alignright” width=“240” caption=“Cooper at work”] 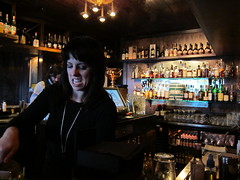 [/caption] Whiskey neat (or on the ice ball rock) lovers can sample Pappy Van Winkle Family Reserve Bourbon 23 Year for $40 a glass. Food GPS did - and I had a sip. So rich and so spicy yet…so clean! Also available is the Four Roses Single Barrel Bourbon - a glass of which I liked to order at Bigfoot West. Peep here for the full, photographedÂ list. Also to note is that the Anderson Valley Stout and Amber Ale are availableÂ  -Â a vote for sustainabilityÂ for the 100% solar-powered brewery. I’ve had the latter at Pizza Fusion Hollywood alongside my vegetarian pizza and it was my favorite beer there. The character of the bar draws from the 1930’s-40’s, appropriately coincidental with Bobby Green’s “1933” group but also appropriatelyÂ post-Prohibition. It wouldn’t be complete withoutÂ the nickel-per-play 1936 jukebox spitting out a dozen (max) songs a la Dizzy Gillespie and Hank Williams sitting nearby the doorway. The rugged windows from Stinkers are still there but thankfully the skunk butts are gone and the faux stench released from them. Instead, bird cages, dark wood paneled wallsÂ and classy, gently-lit recesses abound. In the name of whiskey, the Thirsty Crow bids you on a sidewall mirror: “May you always have an eagle in your pocket…a turkey on your table…and Old Crow in your glass.” (Before you leave, don’t forget to take the fully functional, retro sobriety test.) If you feel like braving the Friday Silver Lake crowds, you can visit the bar at tonight’s opening event. On Sundays, there will be “Whiskey Education” hours from 9 PM - close, where they’ll be offering $4 Buffalo Trace, $5 Sazerac Ryes (!!) alongside live music. Nice. Further reading: The Thirsty Crow Takes Flight in Silver Lake - Thirsty in LA I’ll Take Manhattans: Silver Lake’s Thirsty Crow Bourbon Bar Opens Tomorrow - Lindsay William-Ross for LAist Sneak Peak: Thirsty Crow, Silver Lake’s New Bourbon Bar - Elina Shatkin for LA Weekly Food Night Life: Thirsty Crow in Silver Lake - LA Times Food 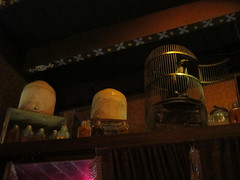 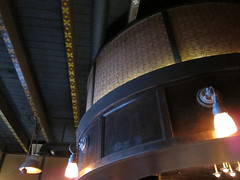