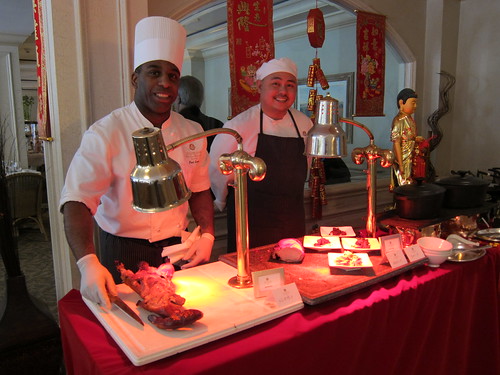 [/caption] Arguably the location of the best Chinese food on the WestÂ Coast, San Gabriel Valley neighbors Pasadena. Sometimes, though, you’re just in the mood for something a tad more posh, like cushioned wicker chairs with a garden view. Or a cheese plate. Or oysters on the half-shell. Or interesting small plates. Sometimes you’re just in the mood for bottomless bubbly. [caption id=“” align=“alignright” width=“240” caption=“Spice Duck with Black Sesame Sauce”] 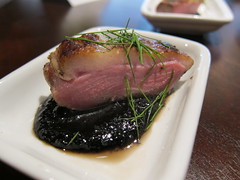 [/caption] Enter the Sunday Chinese New Year Brunch at the Langham Pasadena - availableÂ this Sunday and all the remaining Sundays in February. Whether it’s to celebrate the actual new year or Valentine’s Day - or both - it will run you $75 per person including the bottomless bubbly (champagne, mimosa and virgin bloody mary bar) with which to knock back crab claws, cold small Chinese plates (my favorite being the Spice Duck with Black Sesame Sauce), shrimp cocktail leg of lamb and prime rib. There’s also a full-service omelette station with plenty of fillings which to encase with egg. [caption id=“” align=“alignleft” width=“240” caption=“Hama Hama Oysters on Half-shell”] 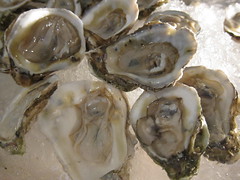 [/caption] Let’s not forget the decent selection of cheese and charcuterie - something I always have a hard time saying no to. To be honest, there was a little something of everything - even a sushi station. And beautiful music and atmosphereÂ providedÂ by their piano-double-bass duo. First of all, I don’t know that I’ve ever had such good service with the bottomless bubbly. Though the “beverage bar” is accessible at all times, a helpful server was refilling our champagne glasses before we so much as got up even once. Second of all, though a visually pleasing addition to their seafood section, I wouldn’t recommend the crab claws - which weren’t especially fresh and actually stringy and tasteless. No matter - I turned my attention to the oysters on the half-shell. They’re of the Hama Hama variety, with a firm consistency but mild finish…a sensation that feels great going down. I went back for more of these babies while being sure to get a slice of prime rib. Also available in the same corner is leg of lamb. [caption id=“” align=“alignright” width=“240” caption=“Sesame Beef With Honey Dust”] 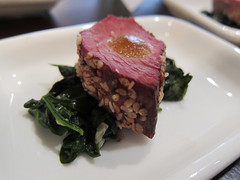 And oh, how I could wish I could comment on the dim sum offered in the brunch. After all, how is it a Chinese New Year brunch without dim sum? But I was just too zealous with everything else before realizing I should have been prioritizing.Â Pretty much a novice mistake. Thank goodness Fiona gave the little somethings surprisingly rave reviews.

Be sure to leave room for dessert, as there’s a chocolate fondue fountain, crepe station and extensive pastry section for that sweet tooth. The Chinese New Year’s Brunch is heaven for any glutton. Sit back, enjoy the view, enjoy the bubbles and celebrate Chinese New Year - with Valentine’s Day as an afterthought. Reviewed buffet was hosted.

Every Sunday in February 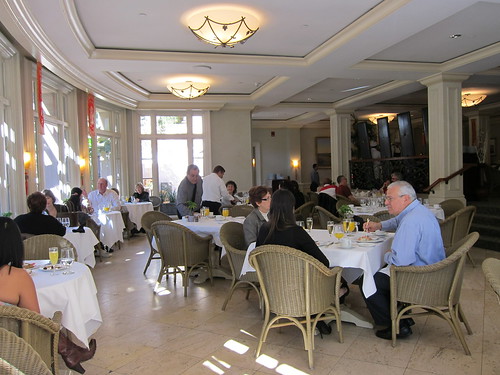