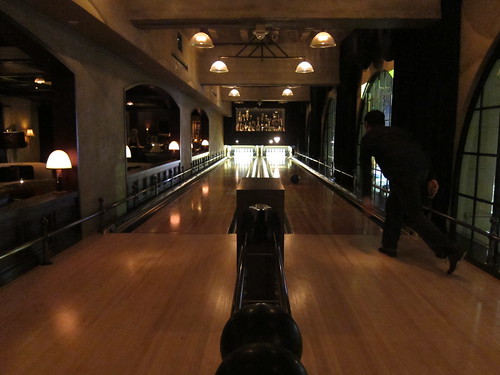 [/caption] When I moved to Hollywood back in August, there was nothing random about it. Sure, things started off rather rough, but even after getting mugged in broad daylight, I wasn’t going to let a little “initiation” deter me; somehow I was still confident I had made the right choice. Lo and behold, all I needed to do was wait a few months to feel lucky that indeed, I was in the right neighborhood at the right time. The Farmer’s Market, Trader Joe’s, even the silliness that is the Cahuenga Corridor contributes to the same, lovely vibe that Amoeba and The Arclight Cinemas do. [caption id=“” align=“alignright” width=“240” caption=“Lounge area adjacent to bowling lanes”] 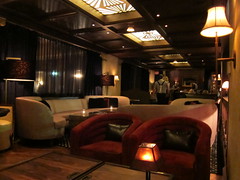 [/caption] And of course, there are the bars. Hemingway’s, one of my favorites, is easily adjacent to a dozen other bars I’d never step inside. But to my surprise and validation, the true gems of Hollywood are springing up like never before during this renaissance - and The Spare Room, which is just upstairs from Matt Biancaniello and The Library Bar (a favorite for a year-and-a-half and still going), is the latest treasure. Daniel of Thirsty in LA (review) and I had the privilege of being two of the first guests at the elegant, new hangout. (Caroline on Crack was unfortunately out of commission due to a stubborn illness!) I can proudly say that I was the customer to bowl the first ball at The Spare Room, and it was a strike! We presented it to Aidan Demarest (7 Grand, The Edison, First & Hope), who directs the cocktail program, as a good omen. No thanks to my weakling arms and lack of stamina, I cooled off pretty hard after my 2nd frame spare. But there will be plenty of other games! [caption id=“” align=“alignleft” width=“240” caption=“The Spare Room Snap (rye, SNAP gingersnap liqueur, lemon juice, nutmeg)”] 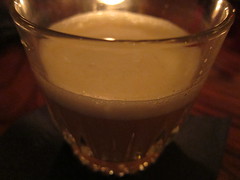 [/caption] It’s all in the details at The Spare Room, which boasts these two classic bowling lanes parallel to Hollywood Boulevard itself, as showcased by three large, dome windows. The lanes come complete with chalkboard, an above-ground, classic wooden ball return and matte black balls with the bar’s personal insignia. No hot pink pearl or glittery green disco bowling balls, here. It’ll run you $100 per hour to bowl, whether you have 2 or 6 (max) in your game, so it’s in your best interest to bring the gang and fill up your scoreboard. But if not for the game, the chance to wear a pair of unique, designer Esquivel bowling shoes for an hour (included in the price) is worth it, alone. I fell in love with the pair I was fitted with, which made me want to walk out with them because they were more comfortable than the shoes in which I came. [caption id=“” align=“alignright” width=“240” caption=“Chilean Sunset (Encanto pisco, lime, pineapple, red wine, egg whites)”] 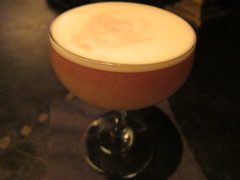 [/caption] While you’re bowling, a “ball assistant” will ensure you know how to score and servers will be on hand to make sure you are enjoying one of Aidan’s liquid creations. And boy are they delicious. Daniel and I started off with The Spare Room Snap, a rye whiskey cocktail further accentuated with gingersnap liqueur and brightened with lemon juice. My second cocktail of the night, a favorite of both Daniel’s and mine, was a Chilean Sunset made by the lovely Naomi Schimek.Â Yes, a Chilean Sunset made with a PeruvianÂ PiscoÂ (as so revealed by Daniel’s question to Aidan) - and it was really a delight. A perfectly sweet-tart-earthy cocktail that just continued to turn and turn on your tongue. Four cocktails in all were on the chalkboard, and if the two solid onesÂ I had (plus a great taste of Daniel’s Evelyn Waughâ€™s Noonday Reviver with Guiness, gin and ginger beer)Â were any indication, I’d be back to both repeat andÂ try the other selections, especially as the menu changes out. [caption id=“” align=“alignleft” width=“240” caption=“Aidan helping us with the photo booth”] 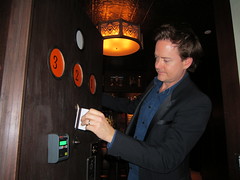 [/caption] And maybe you’d just like a little more than good conversation and less involved that bowling with which to enjoy your cocktails. Get in the photo booth (note the hand-signed animals on the wall paper), where you’ll count down four times before your mug is snapped. It’s just $5 for a dual set of four pictures. The booth is located next to the individually-lit, wooden cubbies that house the designerÂ bowling shoes. Or, take a look at the classic games chest, curated by the also-lovely Alice Fox, where you will find wooden, hand-painted and imported game pieces and game boards. Vintage, possibly. Monopoly, Scrabble, Jenga, backgammon, dominoes and … Connect 4 (at which I beat Daniel - twice) are all available for free play when you put down your credit card, provided you don’t damage any of the hand crafted pieces. [caption id=“” align=“alignright” width=“240” caption=“Alice Fox, Classic Gamemaster”] 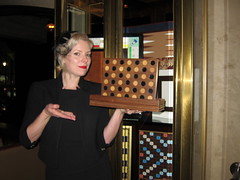 [/caption] It’s a beautiful, art deco lounge in which to drink and play - and now you will never run out of things to do. The classic books set up in the sunken displays along the walls even provide a pleasantÂ reading option. Just be sure not to spill your cocktail over the communal reading material. There are even little pull-outs at each of the unique tables on which to rest your drink. Classy.Â From the strips of white tile woven with with theÂ wood floor to the Tiffany art deco ceiling lights throughout the space, the ambiance is classic yetÂ unique to Hollywood,Â with someÂ help fromÂ the soulful music the DJ was playing early opening night.Â Especially with a food menu coming on board in about a month, I can’t wait to become a regular.