The Hudson Updates Their Look & Menu 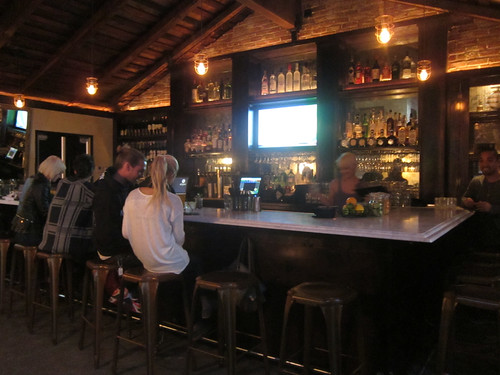 The Hudson[/caption] The Hudson has been at the center of many a West Hollywood scene. So when they shuttered over the new year for 3 weeks to renovate their interior, they had in mind to update the feel of the place - without doing so much as to disrupt the reasons their patrons have become regulars. What you’ll feel immediately when you walk in is the added height - 8 feet, to be exact - and a now-exposed, beautiful A-frame ceiling. [caption id=“” align=“alignright” width=“240”] 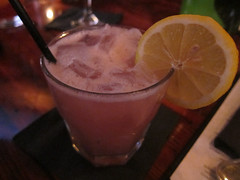 Starry Night - Kappa Pisco, Cassis, lemon, Orgeat[/caption] While many in the neighborhood may remember The Hudson for being host of their infamous neighborhood summer block party (now in its 3rd year), they’ll find a more relaxed vibe - most of the time - during their regular operating hours in the cozy confines of their refreshed traincar look by Jeanmarie Dumouchel (The Varnish) and Croft House Reclaimed Wood Expert, Riley Rea. Thanks to a few creations by Mia Sarazen, who had expanded her consulting gig from The Churchill and has since left us to return to her beloved east coast, the cocktail menu has also gotten an update. It ranges from WeHo-friendly libations such as the easy-to-suck-down Boxcar (Plymouth Sloe Gin, St. Germain, lemon, passion fruit puree, Perrier) to some bitterer varieties (like the bourbon Old Fashioned named The H.O.F.) so that there’s something for everyone. Serious cocktail bar, it isn’t, but The Hudson can definitely be described as a serious hang-out for all who enter its doors. And I can definitely appreciate a rejuvenated take on an establishment that could have been content enough to rest on its laurels. One of my absolute favorite cocktails was the Midwest Monk, which featured Templeton Rye, Carpano Antica Vermouth, Benedictine as well as Miracle Mile Candy Cap Bitters. It was all my favorite cocktail ingredients in one drink! [caption id=“” align=“alignleft” width=“240”] 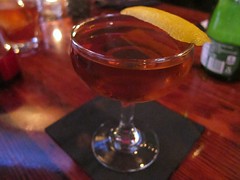 Midwest Monk - Templeton Rye, Carpano Antica, Benedictine, Miracle Mile Candy Cap Bitters[/caption] If tequila is more your style, you may want to try their spicy 8 Track, with serrano-infused Milagro Silver, Yellow Chartreuse, lime, agave & cucumber (my friend Jen, who hates cucumber, could actually enjoy it in this drink). You’ll find some Correlejo Reposado in The Paper Trail, along with aperol, lemon and agave - so I’m really loving the tequila usage in the cocktails, here. They’ve also begun to feature Stumptown Coffee as well as Duff’s Cakemix desserts. Chef Conrad Woodul creates some consistent standards like a Smoked Jalapeno Mac n Cheese, Short Rib Tacos, Brussel Sprouts with bacon and the Hudson Burger with aged cheddar, tomato and aioli. Also, it’s hard to go wrong with Prosciutto and Burrata, no? The Hudson is worth a peep for their new, industrial Chicago look - especially for early work breakers like me - since their happy hour is daily and starts at 4 PM. Sunday and Monday they’ve also got a late night happy hour on drinks. This is one of the few places I know that still does a well $3 happy hour. They’ve also got a rotating taplist with a few microbrews in tow. This is a great, casual West Hollywood joint at which to meet your friends. It’s lively and at times even a bit scene-y, but without resorting to the lowest common denominator that comes with that. The drinks are thoughtful while practical and the space has a ton of natural sunlight. In short, there’s something for everyone.