The Highlights of Great Chefs of LA 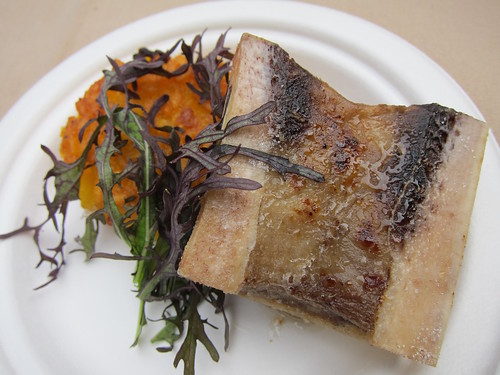 [/caption] We got there kind of late, but there were great hits to be had at Great Chefs of LA. It was overcast and we had just come from another culinary extravaganza - still determined to conquer. The range of bite options varied more than ever - right on down to those Sushi Popper People - but those that showed up at the top of the available selection did a really good job doing so. [caption id=“” align=“alignright” width=“240” caption=“Burrata, Housemade Pink Lady Apple Gelato and Parma Prosciutto”] 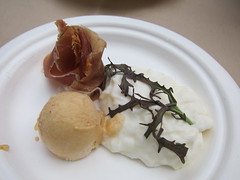 [/caption] What the heavyweights brought to the event often came in pairs. Like Lago’s Bone Marrow and a Burrata dish paired with Housemade Pink Lady Apple Gelato and Parma Prosciutto. I have a hard time arguing with either bone marrow or burrata, but the application of especially the burrata made for a refreshing, mildly-sweet take on the fresh, wet cheese. Autumn savory notes were alive and well in Studio City. I was also happy to see Michael Shearin and Ian Gresik of Drago Centro there. They presented Michael’s Smitten With Britain - with Tanqueray gin, chives, limes and fever tree tonic - and Ian’s Celery Root Panna Cotta, Pancetta with Basil Crouton. It wasn’t coincidence that they went together so well. I grabbed another Smitten With Britain to wash the rest of my panna cotta down. [caption id=“” align=“alignleft” width=“240” caption=“Sashimi Plate”] 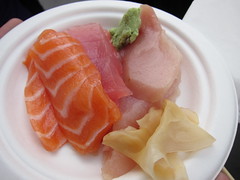 [/caption] Another “solid” was the super generous sashimi plate from Sushi House Unico from the (yes, Italian)Â Giacomino Drago group. I opted for no rice, though you could have ordered sushi as well. The fish was fresh and though I was full from another food event, I just couldn’t leave the pieces down on the plate. La Grande Orange was on hand to showcase pizzas (including a truffle topped variety) from their newly-opened The Luggage Room in Pasadena. The Border Grill truck returned this year for another stop. Stefan Richter’s L.A. Farm had hand-dipped liquid nitrogen orange ice cream popsicles. The Beer Chicks curated the mini beer garden, and invited the individual brewers to Great Chefs, which made it one of the best places to consume beer that weekend. The Bruery, Deschutes, TAPS (Pumpkin Ale!), Duvel and Ommegang were all there to represent - and boy was I happy. There were tons of food event options this particular day (forget about the weekend, period) - but Great Chefs again proved that they were a contender for your time, money and appetite.