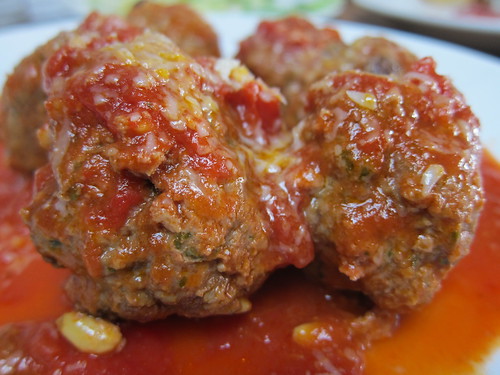 [/caption] I admit, I had never visited Frankies Spuntino in Brooklyn - nor Manhattan - but I was intrigued when I received a copy of their cookbook in the mail. How fascinating the story is, of how The Franks (Falcinelli and Castronovo, if I must be specific) had actually grown up in the same neighborhood, just to reconnect later on by sheer coincidence of running into each other on the street. As always, food brings people together. [caption id=“” align=“alignright” width=“240” caption=“Caesar Salad”] 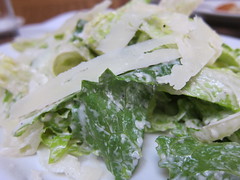 [/caption] Before that reconnection, both had worked in Michelin-starred French restaurants before coming back to Manhattan to work under big names like David Bouley and Charlie Palmer - and then ran their own kitchens to the tune of Moomba and Bistro Jean-Claude. But the drive to create their own Italian-American endeavor and get back to the home-styled cooking of their youth - without the gimmicks like red-checkered tablecloths yet with the affordability of a neighborhood hangout - rang loud and clear. It would have to be Brooklyn; later, their success would allow them to expand to the island and import their own olive oil. [caption id=“” align=“alignleft” width=“240” caption=“Gnocchi alla Marinara with Fresh Ricotta”] 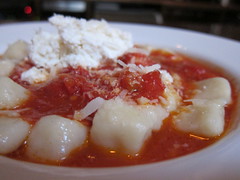 [/caption] And now, the cookbook. What a beautiful styling it beholds, as if a volume in a series of classic novels. And the world tour that would bring them to a one-off at Animal on Fairfax, Los Angeles - with a certain New York Times article on medicinal appetite aids that would bring he, Vinny, Don and Roy Choi together (all were present during the Franks’ dinner). The cheese and salumi plate, complete with fresh olives, roasted mushrooms and browned cauliflower was solid, as was the bread - especially when dipped in the Franks’ olive oil. Whether that olive oil passed the “extra virgin” test that’s been in the news lately remains to be seen, but it was some of the most flavorful I’ve tasted in awhile. The Caesar salad was fresh, delicious and … made with Hellmann’s. Yes, Hellmann’s. Apparently, this very recipe was rejected by Koo Koo Roo (Falcinelli used to be a consultant for them) but I can guess that all Frankies Spuntino customers are ever so thankful. [caption id=“” align=“aligncenter” width=“500” caption=“House-made Cavatelli with Faiccos Hot Sausage and Browned Sage Butter”] 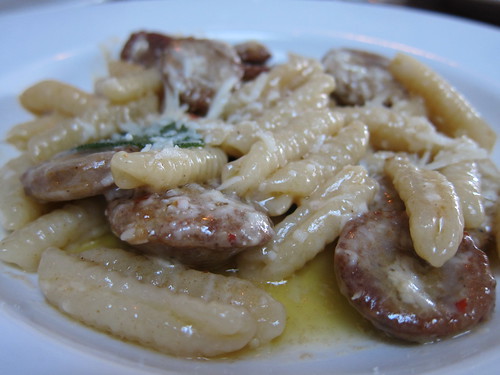 [/caption] My favorite, however, had to be the Cavatelli with Faiccos Hot Sausage and Browned Sage Butter (recipe). Not too heavy but having plenty of flavor - including the kick at the end thanks to the sausage - the Cavatelli were ever so fun to bite, with a perfect, almost-gummy consistency. [caption id=“” align=“alignleft” width=“240” caption=“Red Wine Prunes With Marscarpone”] 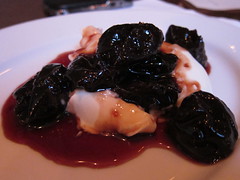 [/caption] It is hard, though, to decide which meatballs I liked better - but the beef meatballs made with garlic, bread crumbs, pinenuts, raisins - and topped with Pecorino - probably won out on the pork braciola variety since I’m a mere traditionalist. But both are awesome, moist and baked, in keeping with the Franks’ desire to create hearty but not overwhelming dishes. The classic Gnocchi alla Marinara fit the same bill - with the vibrant tomato sauce really bringing out fresh flavors on the perfect canvas that was the gnocchi. I don’t remember appreciating gnocchi as much as the Franks’, much less one that was simply dressed with marinara, yet enhanced with a rich ricotta. Then again, margherita pizza is my favorite because it’s simple. And the dessert. The cheesecake was heavenly - not too rich and having a perfect, creamy consistency. But the real favorite was the prunes steeped in red wine and paired with marscarpone. I love wine and cheese but I could not have imagined this perfect marriage. It was a savory dessert thanks to the creamy-wet cheese but also subtly sweetened by the prunes. The richness of the dessert was perfectly accentuated by the red wine those prunes were soaked in. I would go to New York just to order this dessert after the pinenut-raisin meatballs and Cavatelli! I can tell the Franks’ Frankies Spuntinos are both special, neighborhood spots just from having tried their food. The prices are remarkably low for the quality - especially given their New York locations. I wonder if I might blend in if I tried…(doubt it).