There comes a time whenÂ things you do with the sig. other’s parentsÂ convey a special bond between you and them.Â  Maybe it’s the first time you hug.Â  Perhaps it’s that first time his mom asks you if you gained weight.Â  Last night, though,Â a pinnacleÂ was definitelyÂ meeting them toÂ eat ramen.Â  While a nice steak dinnerÂ is unfailingly impressive,Â there’sÂ inevitably an air of formality to itÂ because really, Who won’t come out toÂ eat filet mignon or prime rib?Â Â There is an event made out of it because someone is shelling out aÂ decent amount of moneyÂ so that everyone can eat cow and mashed potatoes.Â  Eating ramen together, though, is like gathering to eat folk food.Â  The camaraderie over simple food isn’t easily replicated.Â  As Rameniac puts it, we “went noodling.” I’ve realized that it takes me overnight to decide how much I really liked what I had to eat the night, before–especially if it was my first time eating it.Â  I figure it gives the flavors time to actually sit there and sink into my tastebuds.Â  It was that way the morning after my first time eating yakitoriÂ at Yakitoriya.Â  It was as if I hadn’t even known it tasted that good at that time–and I realizedÂ only the following morningÂ that IÂ wanted to remember the taste of that delicious Bincho charcoal permeating my food.Â  I had thought, “Wow, that was really good.” AsÂ Americans inexperienced in the art of “noodling,” our hands-down favorite ramen in the world for many months nowÂ has beenÂ Shin-sen-gumi.Â  It has been a tradition for awhile now; I would estimate we have eaten Shin-sen-gumi ramen on average at least once every two weeks.Â  And so we met his parents there. 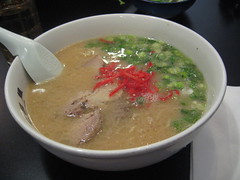 It was delicious as usual.Â  Tasty.Â  The noodles were fresh and that familiar soft texture.Â

UntilÂ I had my atypicalÂ morning foodie epiphany, that is.Â  I was shocked, actually, with the realization that last night, I had not experienced the sameÂ fuzzy feeling when I tasted that extra-delicious pork brothÂ at this familiarÂ venue.Â Â Where hadÂ they gone wrong?Â  What could have happened with my rich broth and soft curly noodles?Â  And then I realized that it could only be one thing.

I had tasted ramen from Santouka. 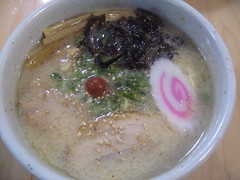 Santouka, which is located inÂ the Mitsuwa Japanese Market food court (West LA and Torrance),Â was even better.Â  Perish the thought that the Shin-sen-gumi have been dethroned.Â  Alas, it was true.Â  The shio broth ramenÂ at Santouka, recommended byÂ my friend J and the Rameniac himself,Â was indeed even more flavorful.Â  Also interesting to note, the noodles areÂ firmerÂ hereÂ as Rameniac has enlightened me that Santouka ramen,Â Â from the north part of Japan,Â is actually a whole different type of ramen from the Hakata kind Shin-sen-gumiÂ offers, which is softer.Â  Clearly, when it comes to ramen, I have a lot to learn!

And it’s just as well.Â  The best ramen from my location remains on the West Side–just not in the Sawtelle-Olympic district like one would expect.Â