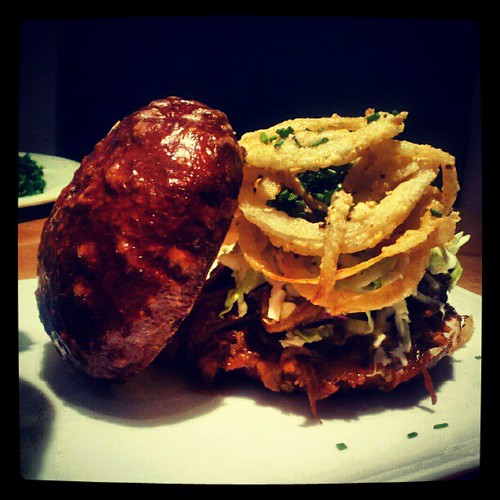 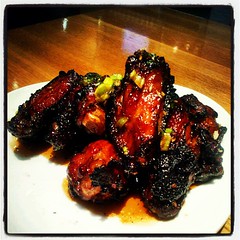 Black Pepper Wings[/caption] My favorite of the meal was the BBQ Pulled Pork Sandwich - an item that you’ll find under the “sandwich,” not “burger,” column. How many times have I had a pulled pork sandwich where the bun sopped up all the sauce before essentially becoming a shell of itself, having lost its integrity? We all know and even love what a mess any handheld pulled pork item can be, but what if the “mess” part was contained somewhat by a firm, but tasty, pretzel bun? What’s more - the lightly fried, even delicate onion rings also help absorb the sauce, giving the pulled pork sandwich more structure and even crunch than anything this saucy and tasty ever afforded, before. The Black Pepper Wings were another stand-out, an atypical nod of the Asian (Fusion) Persuasion. Think Black Pepper Beef, but with chicken, instead - and in a manner best enjoyed while your eyes are set on the sports screen. Tasty wings, they are, and there’s no better sauce from which to lick from your lips and fingers. Of course, there are the menu essentials such as the beet salad and Brussels sprouts, both of which are done as well as anywhere. But my favorite pasta was the Creamy Chipotle Rigatoni, which was done al dente and finished off with that perfect kick. Corn and cherry tomatoes give the dish a nice, sweet touch while the mushrooms sustain its earthy notes. Wash down your meal with a glass of mostly West Coast beer from one of their four taps (or big bottle selection) or with a glass of wine. There are plenty of single glass selections to go around. So if you find yourself in the Marina or nearby, J. Nichols’ overall solid menu is worth the stop. Just be sure not to miss out on the essentials while you’re there… All food and drink were hosted.