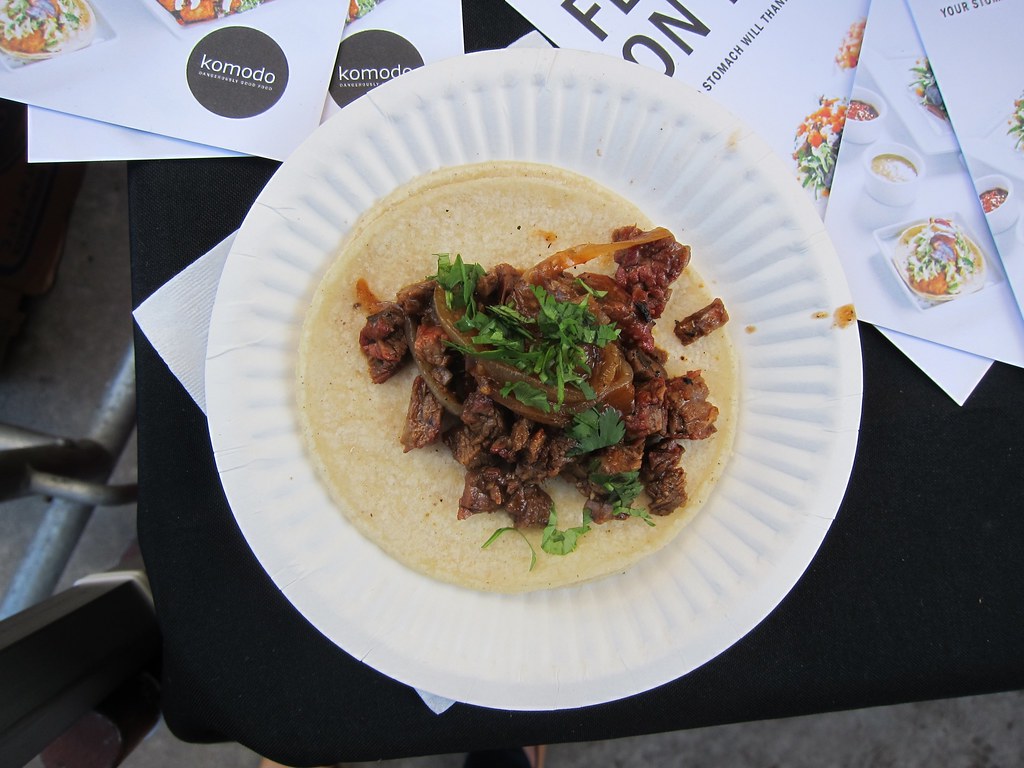 Sriracha Marinated Chimichurri Steak Taco - Komodo[/caption] It was a thankfully mild Sunday in Chinatown, and Grand Central Plaza was filled with red tents under which chefs, cooks, brewers, bartenders and vendors doled out Sriracha-themed exclusives to enthusiasts of the celebrated, local Rooster sauce. Whether the food and drink were evocative of or complementary to the red jalapeno chili sauce, there was no shortage of flavor to be found on that block between Broadway and Hill. [caption width=“1024” align=“alignright”] 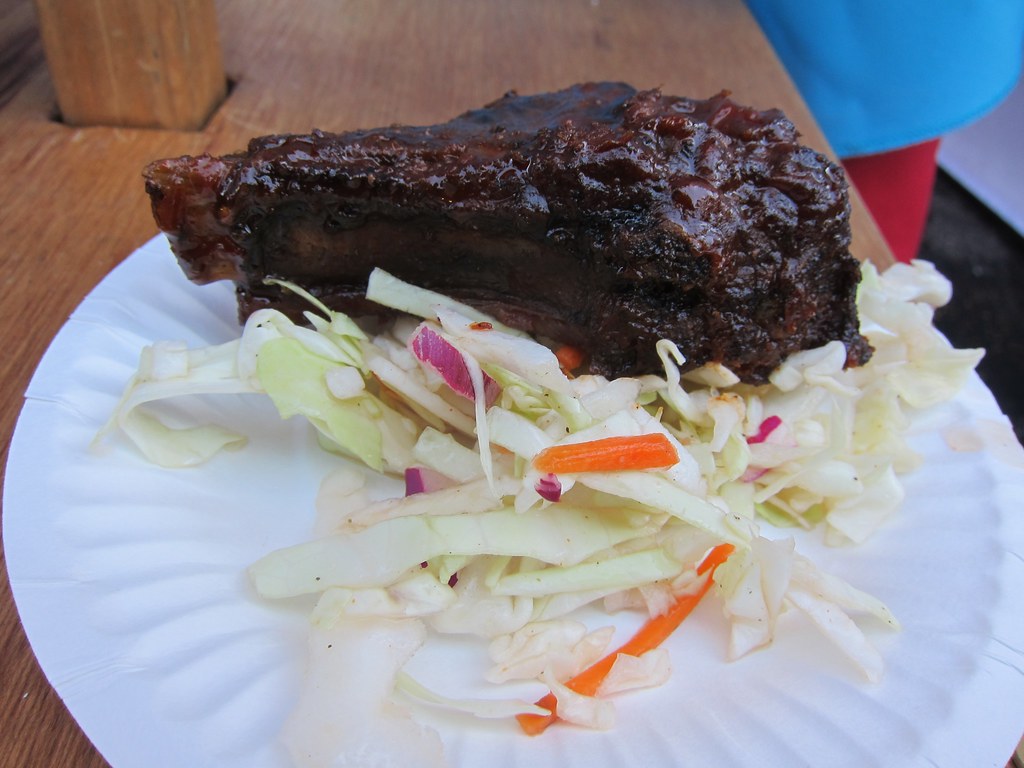 Sriracha BBQ Rib - Beachwood BBQ[/caption] In true form, the longest line was at Egg Slut’s booth, which was serving Spicy Pork Tan Tan Ramen as a preview to Ramen Champ – their forthcoming stand at Grand Central Market. Nothing like spicy, chewy noodle goodness on a Sunday afternoon. And if that or any of the other bites weren’t spicy enough, practically everyone knew to hit up Jitlada for their Spicy Sriracha Curry over rice – over rice and with some raw carrots for barely enough cooling action. You know that when things hurt at Jitlada, they hurt so good. [caption width=“1024” align=“alignleft”] 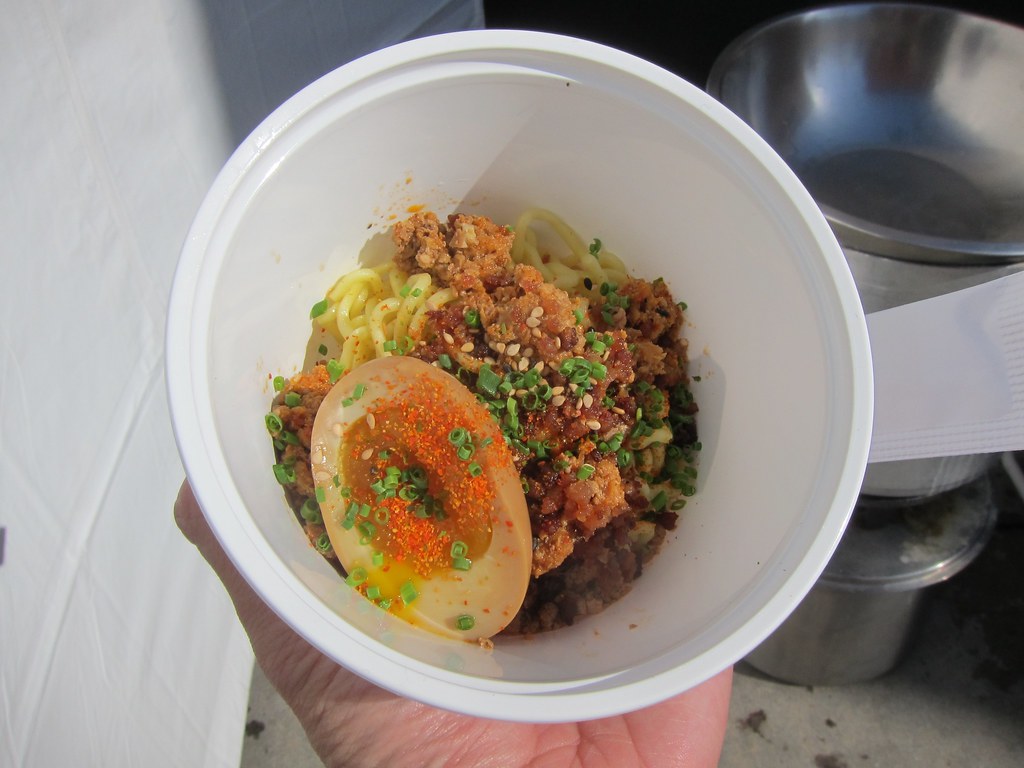 Egg Slut’s Spicy Pork Tan Tan Men[/caption] Chef Philip Frankland Lee represented his brand new vegan and vegetarian-focused The Garadene Swine in Studio City with a dynamic Crispy Yucca bite, sriracha (of course) and avocado mousse. SQIRL served their ever-popular Crispy Rice Salad. One of the out-of-the-park hits amongst the omnivores were the Sriracha BBQ Glazed Smoked Spare Ribs that Beachwood BBQ was handing out along a couple beer selections – with many attendees going back for more meaty bone. Amazingly, the well-prepared Seal Beach BBQ and beer slingers came from afar yet didn’t run out of ribs until maybe after I left. [caption width=“1024” align=“alignright”] 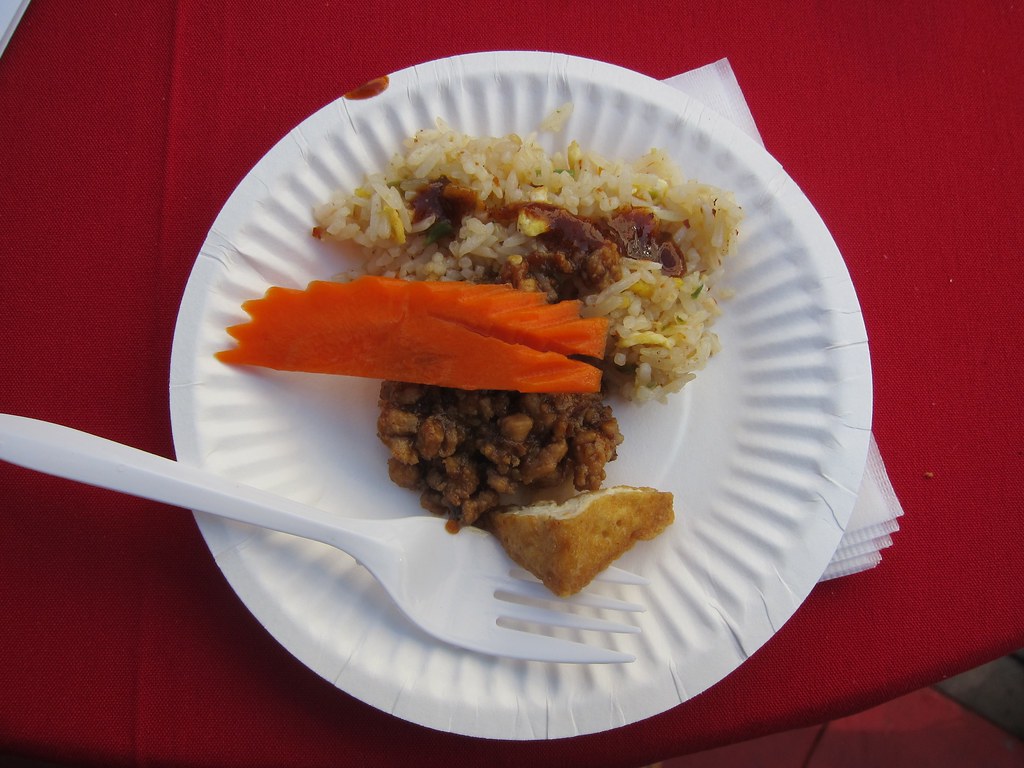 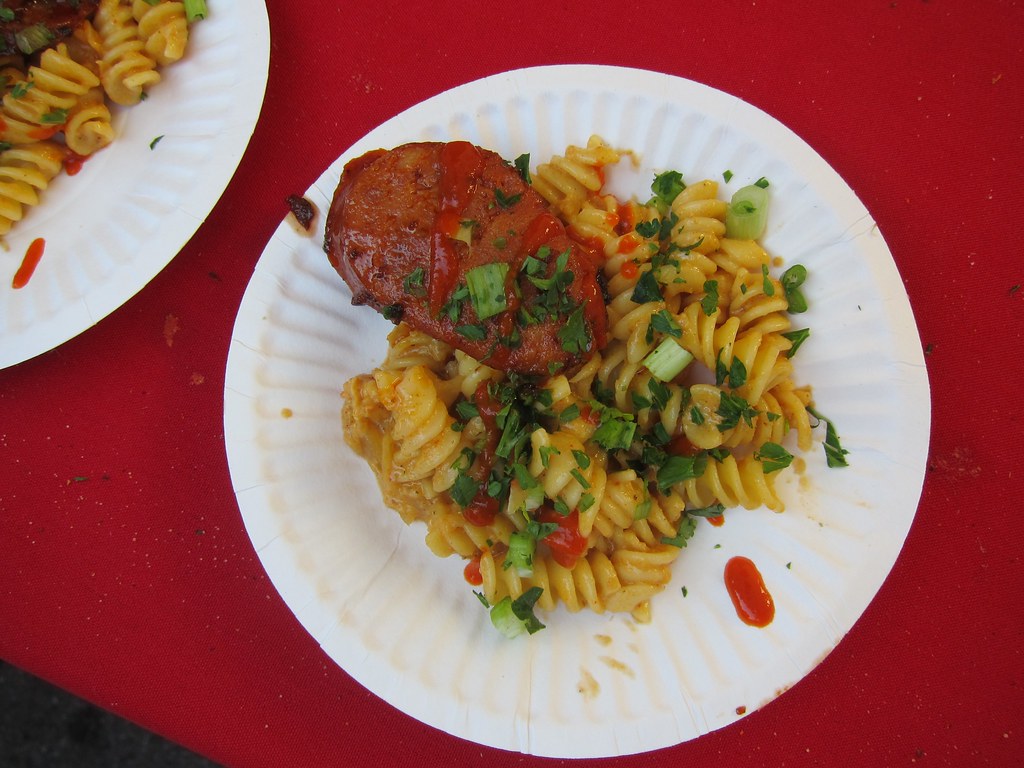 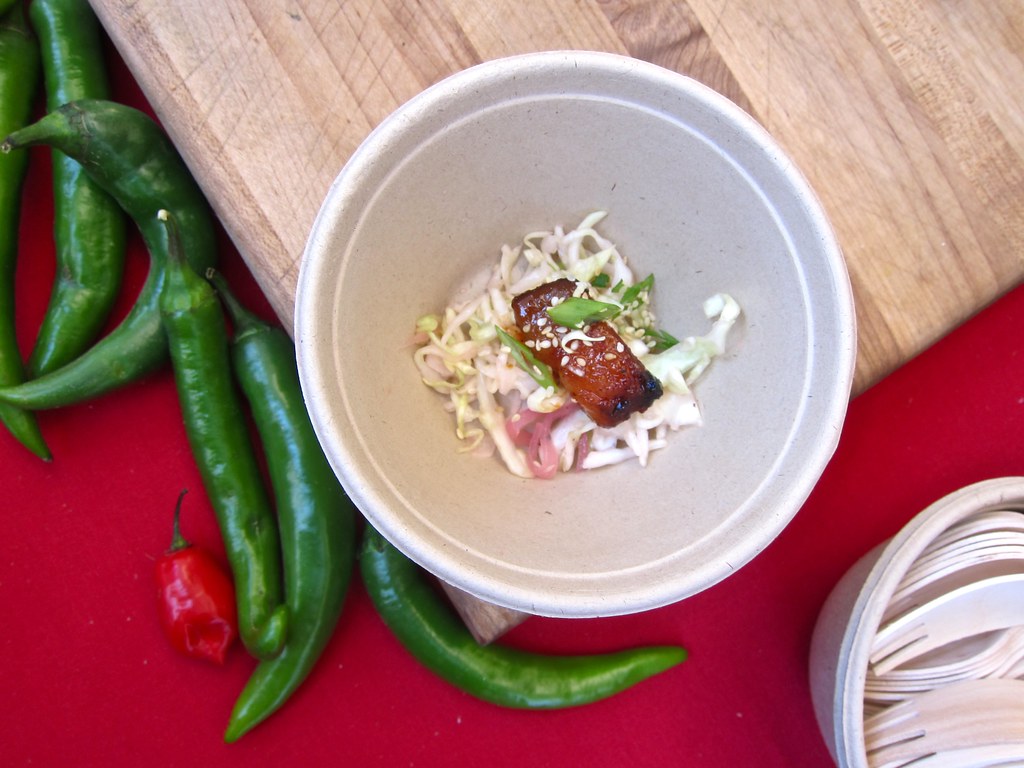 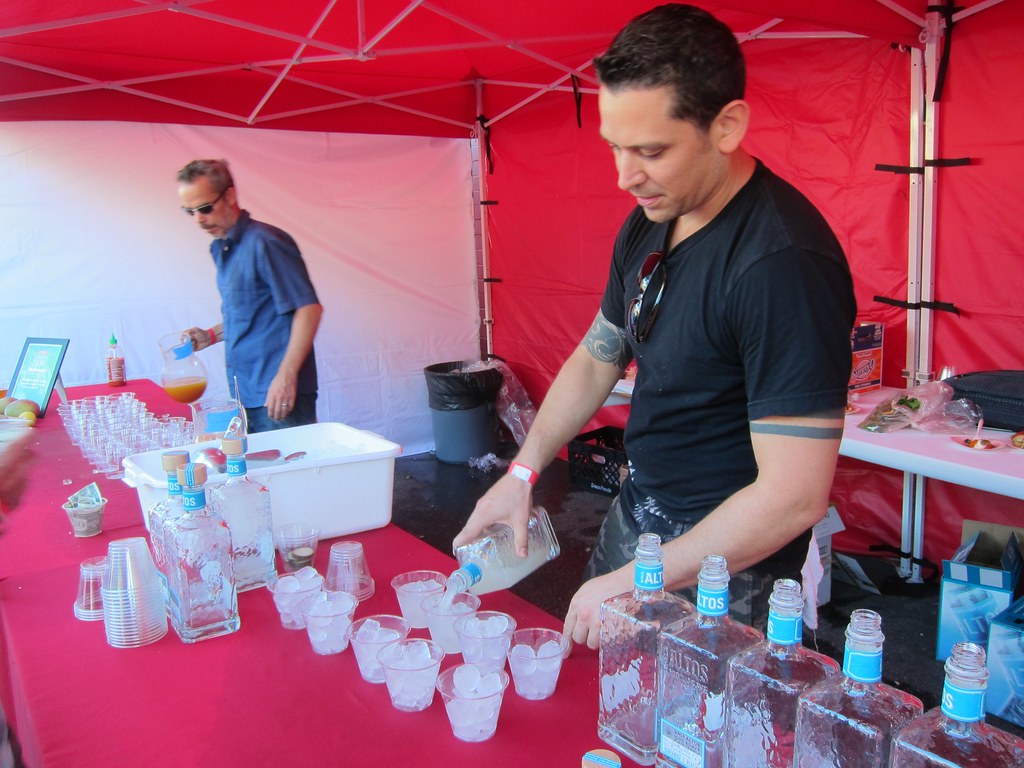 Jason Bran pouring cocktails[/caption] And Crème Caramel wowed everyone with their dessert, dubbed “Holy Petit S’mores.” Sriracha Marshmallow came layered on a fudgey dark chocolate brownie, before being dipped in white chocolate…before being rolled in Graham Cracker and Sriracha Honeycomb Dust. This was heaven, and is just today now available at their store in Van Nuys - so be sure to head on over to get yours. [caption width=“1024” align=“alignright”] 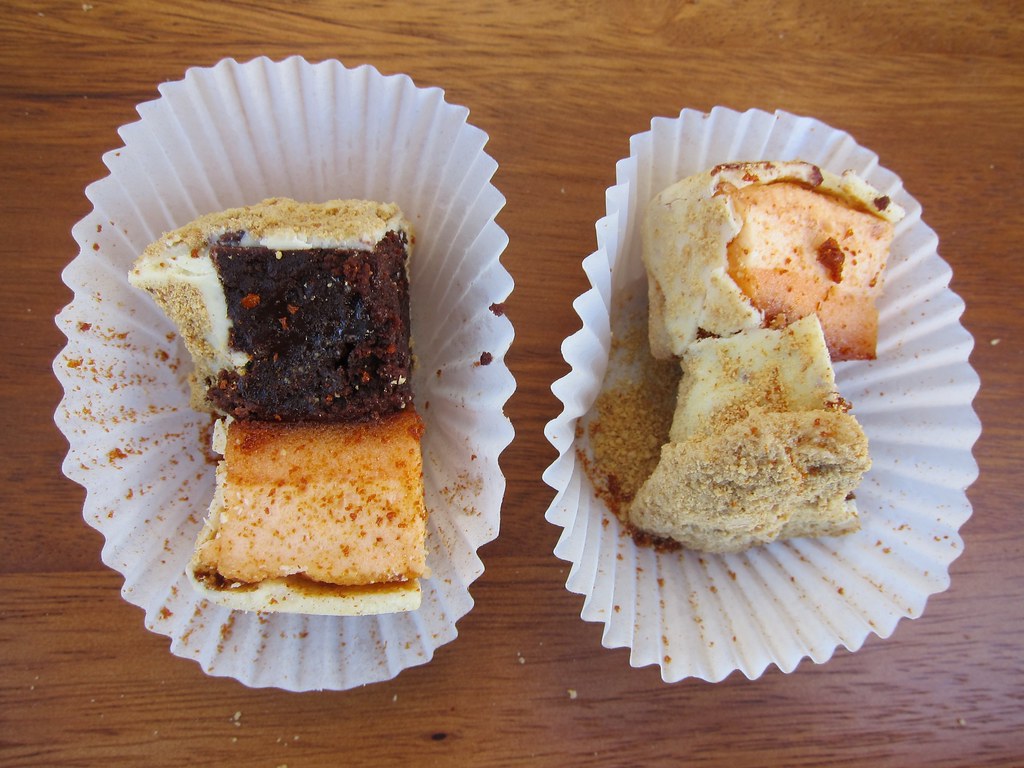 Holy Petit S’mores - Creme Caramel LA[/caption] In all, this was a fantastic event put on by Sriracha Cookbook Author Randy Clemens and Josh Lurie of Food GPS, further proving that yes, you really can hold food festivals in one vein while keeping things varied and engaging with its attendees. It’s been quite a summer and fall for food events in 2014, but the Sriracha Festival has become a great way to see the really creative ways chefs, brewers, bartenders and others play it up with the Rooster Sauce. Be sure to buy your copy of The Sriracha Cookbook, The Veggie-Lovers’ Sriracha Cookbook and head on over to FoodGPS.com to learn all about the adventures of Randy and Josh with and without the spicy sauce.