The 2009 Women's Conference: Architects of Change 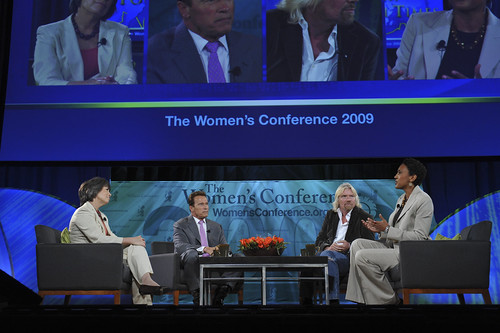 [/caption] Imagine handfuls of power players in the international arena at one conference. Now imagine all those power players in one place to celebrate and further one theme: Architects of Change. The California Governor and First Lady’s Conference on Women is a tradition in addressing the issues that concern women today and I couldn’t have been more honored to be asked to cover it as a blogger. Thanks to Lean Cuisine - one of the main sponsors of this estrogen extravaganza - I had front-row access to the main stage, got to sit in on panels and peruse The Village during this event, which sold out in literally the first hour tickets went on sale online last July. The Conference - which originally was only one-day long but due to demand and subsequently a desire to meet that demand - started off Monday night with “A Night in the Village” which was basically sponsoring vendors showcasing their products and making their PR push. There were free makeovers, samples, raffles, coupons, discounts on product and sometimes attempts to collect mailing list info galore. This was the night where I got the privilege to meet and hang out with fellow bloggers also covering the conference. Amongst them: Tara Met Blog, Stevie of LA Story, Sweatpants Mom, SoCal Mom, Silicon Valley Moms, The Girl Blogger, Elizabeth of Traded My BMW in For a Minivan and Sasha of Little Pink Book PR. [caption id=“” align=“aligncenter” width=“500” caption=“Martha Beck, Paula Deen”] 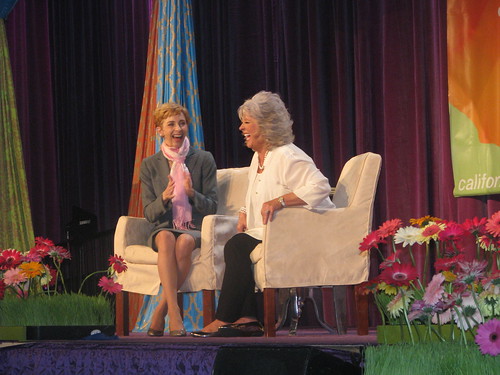 [/caption] Probably the most remarkable conversation that happened that night was between Paula Deen and Martha Beck. The theme was relevant to the life of Paula Deen - a Food Network star and two-time Emmy Award winner and who hadn’t started her career until her 40s. Listening to her story of getting out of a self-pitying rut, entrepreneurship (selling lunches and sending them out with her sons from her home) and overcoming agoraphobia was empowering to all who were there. “You are the only person who can prevent your own happiness. You are the only one who can stand in your own way.” - Paula Deen 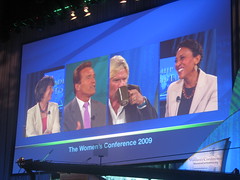 The next day, the main session was hosted by Paula Zahn - complete with full Twitter disclosure - and headed off by powerful female executives of Safeway (Larree Renda) and Disney Media Networks (Anne Sweeney). Geena Davis, who created The Geena Davis Institute on Gender in Media, also spoke on the inequality of female characters starting as early as G-rated features. The featured conversation, though, was with Sheila Bair - chairwoman of the FDIC, Arnold Schwarzenegger - Governator of California, Sir Richard Branson - Chairman of the Virgin Group and moderated by Robin Roberts - co-anchor of Good Morning America. And if it seems like I’m name-dropping here, I’ll be the first to admit I am. I realized that the opportunity to witness the colloquy amongst figures who have really blazed their way to the amazing place they stand now was a privilege. Sir Richard Branson talked briefly about how he buttressed his new Virgin Airlines venture - starting with just one plane - with the then-successful record company by taking risks but protecting his downside. Sheila Bair (Forbes’ 2nd Most Powerful Woman of 2008 and one of the first people to recognize the threat of subprime loans according to LA Times) talked about the challenges of the economic crisis, recent bank consolidations and brokerage account insurance increases. With Schwarzenegger rounding out the conversation and Roberts asking pertinent, probing questions - the conversation eventually centered on women, risk-taking and fear of failure. In the traditional home setting, sometimes the girls in the family are more protected which is actually counter-intuitive to the necessity of taking risks, failing and subsequently learning from failure. “Without failure there is no success. Look at some of my movies - Jingle All the Way, etc…” - Arnold Schwarzenegger [caption id=“” align=“alignleft” width=“240” caption=“Somaly Mam”] 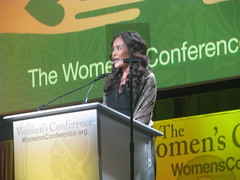 [/caption] Somaly Mam, a former sex slave in Cambodia and now with her husband leads an organization which provides a refuge for other children and adults in modern slavery, had the keynote speech with today’s urgent issue. Through her broken, 2-year-old English, she conveyed the tragedies of human trafficking in Southeast Asia and the horrific brothel lives children are subjected to. It was a true testimony in the urgency of action to help our brothers and sisters in Southeast Asia. Tears flowed profusely amongst the thousands of attendees while hearing her braveÂ journey and courageous fight which continues today.Â (You can fight sex-trafficking by donating at Somaly’s website: Somaly.org.) [caption id=“” align=“aligncenter” width=“500” caption=“Kara Swisher, Joe Rospars, Randi Zuckerberg, Premal Shah, Ashton Kutcher”] 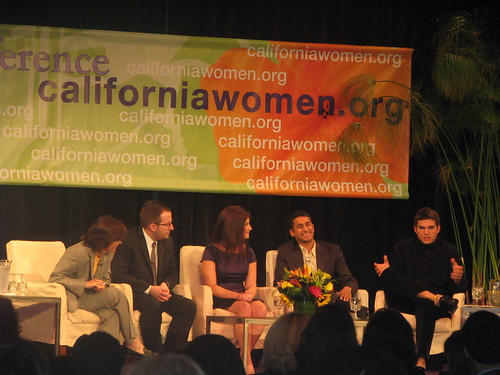 [/caption] Dispersed in between the main sessions, there were two panel discussion sessions and a handful of options to choose from for each session. Naturally, I chose “Changing the World Through the Web.” Kara Swisher, co-producer and co-host of The Wall Street Journal’s All Things Digital, moderated the conversation between Joe Rospars (new media director for the Obama Presidential campaign), Randi Zuckerberg (manages marketing initiatives at Facebook, sister of co-founder Mark Z.), Premal Shah (creator of Kiva.org) and Ashton Kutcher (needs no explanation here). The discussion was kicked off by a screening of a Jon Stewart Daily Show clip making fun of Twitter. The exchange that evolved focused on how the Obama campaign utilized user-generated content (gathering for parties and canvassing efforts), how Kiva has been able to provide microloans for entrepreneurs in Third World countries and plenty of jabs taken at Ashton Kutcher by moderator Kara Swisher. [caption id=“” align=“aligncenter” width=“500” caption=“Claire Shipman, Valerie Barrett, David Gregory, Madeline Albright, Amy Holmes”] 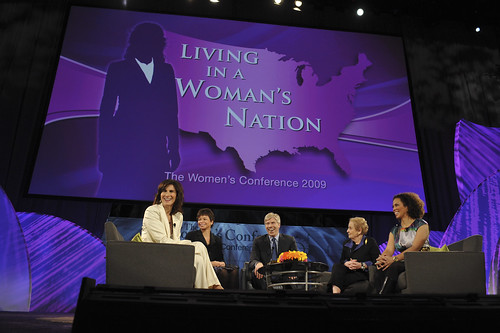 The next main session featured a conversation between Claire Shipman (Good Morning America), Valerie Jarrett (Sr. Advisor to Obama), Madeline Albright (frmr Secretary of State) and Amy Holmes (CNN) - and moderated by David Gregory (Meet the Press). Main points addressed the evolving game for women in a man’s world - including the responsibilities and desires for family time and the negotiation of such with male partners. In regards to advancement, Valerie Jarrett advises, “Be your own best advocate” whereas Madeline Albright encourages a little finesse: “Women don’t have to hate men to get ahead. It’s not a battle anymore. It’s a partnership,” as well as sisterhood: “There’s a place in hell reserved for women who don’t help each other” (in regards to women who work vs. women who stay at home). 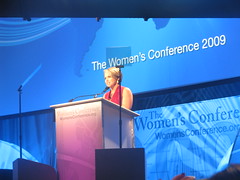 Katie Couric came up next and gave her story on failure and resilience. She told of her start - with the President of CNN at the time saying he “never wanted to see [Katie’s] face again” on TV to demanding the same hard-hitting stories as her male co-ancher (Bryant Gumbel) on The Today Show before she took the job. It was an awe-inspiring speech and challenged everyone in the room to think differently about the permanence of failure.

The next pertinent conversation in the main arena was a mind-blowing panel on grieving. It was opened byÂ Maria Shriver and the story of herÂ days Â the testimony of the last living days of her mother, Eunice Shriver.Â a true testimony in the realities of a necessary process that often goes unrealized - the reality being that it catches up to you, eventually. Presenting on the panel was Elizabeth Edwards, Maria Shriver, Lisa Niemi (Patrick Swayze’s widow) and Susan Saint James. 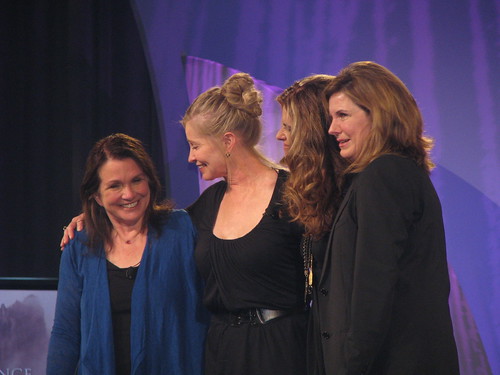 It was definitely a courageous panel - and one that everyone learned Kelly Preston (John Travolta’s wife, Jett Travolta’s mother)Â had considered participating in but decided, understandably, it would haveÂ been too hard. The discussion brought to light the necessity of the grief stage and how “no one is exempt” while understanding that real bravery is going through this realization and subsequently doing the hard, unpredictableÂ work.

The Women’s Conference - Â is worth the time out to hear noteable, even powerhouseÂ speakers present the state of women today.

Hear any speech at Women’s Conference 2009