Thanksgiving In a Sandwich at simplethings 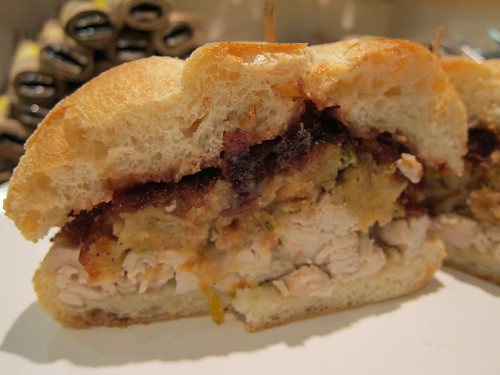 [/caption] Something special is coming to 3rd Street in Mid-City West, and it’s simplethings sandwich and pie shop. Third street is one of Mid-City West’s main treasures, and the store is a nice departure from the hustle and bustle of Joan’s on Third and the scene-y brunch hullabaloo of Toast. [caption id=“” align=“alignright” width=“240” caption=“3” Bourbon Pecan Cutie Pie ($2.50)”] 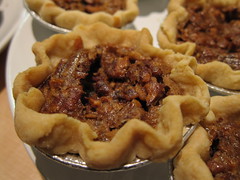 [/caption] At simplethings, you’ll get to choose pies from three different sizes (3”, 5” & 9”) in delicious varieties like Pumpkin, Key Lime, Banofee (banana + toffee = deliciousness), Bourbon Pecan, Orange Creamsicle, Chocolate Peanut Butter and Blueberry. Feelin’ like whoopie? They got plenty of varieties of whoopie pie for your hollerin’. Or maybe you were feeling like a meal, first. They have specialty sandwiches like the Prime Rib sandwich, with their prime rib made in-house, and a Veggie Sandwich that tastes as hearty as a meat party. They also serve breakfast on the weekends until 2 PM and have fresh salads available all day. But my favorite bite of the media preview had to be the Thanksgiving Sandwich, made with cranberry chutney and jalapeno stuffing. They also use chunks instead of slices of the bird, which helps keep the turkey meat tender. It’s seasonal, comprehensive and everything I could want since I’ll be on the plane on Thanksgiving Day. I’m celebrating early! And if you’re craving pies and sandwiches now, today’s your lucky day since simplethings just opened at 11 AM. Call in your order or stop by - its simple decor is a charming set-up for the drop-in.