Test Kitchen at Bestia[/caption] The story of Test Kitchen is something of a legend. Legends, though, are usually long gone - relegated to a time past. And yes, that was the year-long story of the Westside Test Kitchen (which now houses Sotto), but it’s about to be revived come next Tuesday. The series, brought to you again by Bill Chait, heads downtown to Ori Menashe’s (formerly Angelini Osteria) new digs at Bestia and it runs from October 16 through November 11. Notable chefs hailing from Los Angeles and around the country will rotate, just like the 2010 incarnation. Future menus and projects as well as collaborative exhibition nights will be the focus, much like before. And the project wouldn’t be complete without cocktails. Julian Cox and Josh Goldman, the resident mixologists, as well as special guests will complement the bar experience and rotating menus with their special creations. Of course, the best way to kick this off would be to put two Los Angeles powerhouse chefs together in a collaborative effort, and thus it will be: Neal Fraser and Walter Manzke will be joining Ori Menashe as well as Bestia’s Pastry Chef, Genevieve Gergis, will start us off on Tuesday, October 16. Snag your reservation on Open Table tomorrow, when they open up. Of course, you’ll want to keep abreast of every change - as that is the key to Test Kitchen. So go ahead and sign up for the Test Kitchen newsletter. I’ll see you there on multiple nights. Update #1 (Fri. 10/12/12): Test Kitchen has since announced a few more chefs for the first week… [caption id=“” align=“aligncenter” width=“500”] 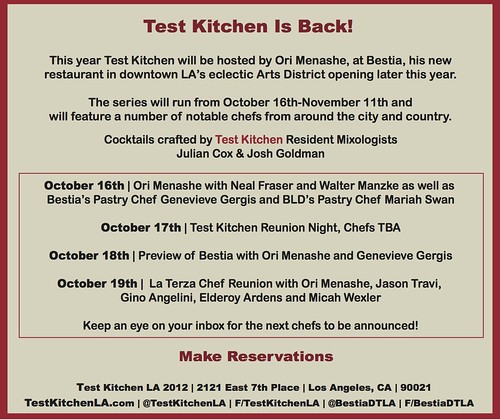 Test Kitchen Announcement[/caption] Update #2 (Tue. 10/16/12): Some more specifics have come out of Test Kitchen. Check below for the menus to be served tomorrow and Thursday and be sure to book your reservations here: Wednesday, October 17 Test Kitchen Reunion Night featuring Alex Reznik, Christian Page, Kevin Meehan and Vartan Abgaryan. $50 per person / $10 cocktails by Julian Cox and Josh Goldman

Reservations will be available on Open Table on Thursday, October 11th.