Taste of East Rivals Its Scene And Style 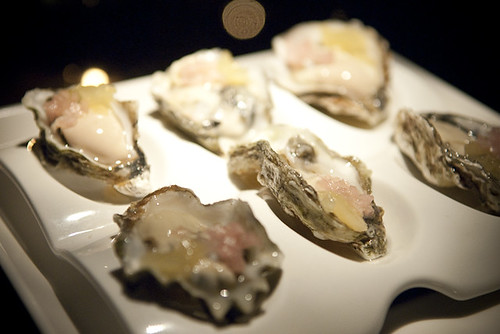 All photography courtesy of Andrew Herrold

East is not the kind of place that, upon drive-by, would make me turn my head while noting to come back or even to simply do more research. If it’s a Japanese Pan-Asian place on Hollywood Blvd., I’ve basically assumed it’s Geisha House or the recently-shuttered Club DSushi (which is actually on Sunset Blvd but pretty darned close). I have a stock montage that I play in my head - slow motion close-ups of collapsing hand cut spicy tuna rolls being shoved into lipsticked mouths as low-frequency four-on-the-floors pulsate through the venue. Having to shout over trance lasers to hear the person immediately next to you. Sake bombs. Blech. Saketinis. Blech. You know the place. The place where renditions of Miyagi’s go. I get it - it’s hard to imagine Hollywood Blvd. as a culinary destination. I wouldn’t argue with you there. But then, I think, it would be unwise to completely extract that scene from the identity of a restaurant like East. During my visit, I sat across from Rob Dyrdek (for all you extreme sports fans). Celebrity or not, the guy was on to something, here - the restaurant actually doesn’t rest upon its Hollywood Blvd. laurels and serves up reliable seafood on the half - and will even impress you with its minimal, classy interior. [caption id=“” align=“aligncenter” width=“500” caption=“Warm spinach, arugula, shiitake mushrooms, duck confit, Bali pepper tossed in sherry vinaigrette. Topped with crispy pancetta and roasted young candy beets.”] 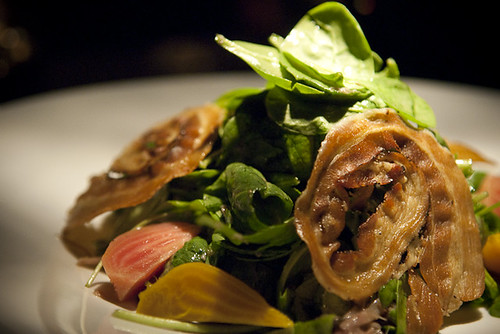 Let me stress again: Don’t come here looking for a bargain. Bring your date here because while you may want to throw her off with the exterior and location of yet another typical Hollywood spot, East will surprise her with classy, minimalÂ decor and some amazingly good dishes. Keven Alan Lee heads the kitchen, hails from Vegas’ LutÃ¨ce and let’s face it - there are some you want to impress outside of business and East is the place to take him or her. Even the starting spinach salad with arugula and duck confit was very good - a good amuse to precede the seafood to come.

And do concentrate on the shellfish - not so much the sashimi (“We do sashimi, not sushi” I was told). 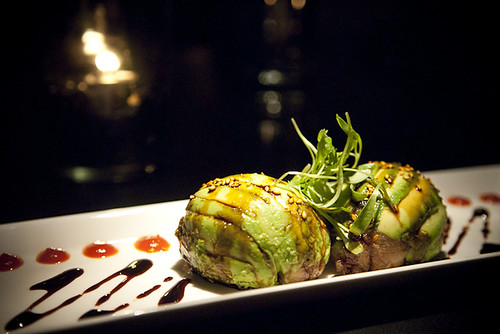 Though perhaps a bit hasty for me to judge their fish program based on one dish, the Dinosaur Egg is simply a mound of albacore encased in a shell of avocado and topped with sweet unagi sauce and some sesame seeds. The shape is novel, the ingredients typical and the fish inside my particular egg was cold and unremarkable. This is where presentation gives way to the kind of “innovation” you come to expect on The Boulevard. (But if you do insist on ordering it, be sure to guard the dish on which it came because it’s dotted with pertinent Sriracha sauce - they will bus it away before you can say “Dinosaur Egg.”)

Back to the task at hand: The seafood.

Do not miss the oysters on the half (title photo, above) nor the scallops on the half. These are the two mainstays that will anchor any experience I have at this restaurant. The oysters, as always, are perfect with the mignonette and I appreciated the yuzu gelÃ©e and onions which complimented its raw texture with an appropriate Asian, briny touch, keepingÂ things subtle. 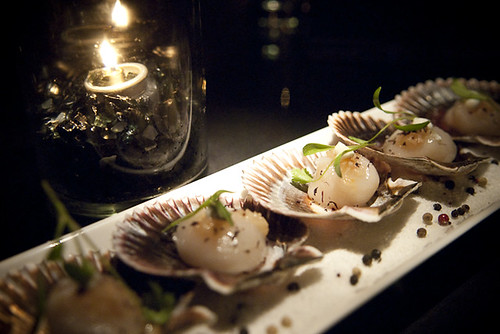 As presented at Great Chefs of LA - the scallops on the half shell - these are probably my favorite. The touch of creme fraiche and shiso dust are perfect with the raw scallops, as is the micro cilantro. “Spoon” with your fork, don’t pluck, our server warned. And what delicious spoonfuls they were.

Go with the Miso Mustard Hawaiian Walu over the Garlic Chili variety - the former I’ve also tasted at GCLA and was impressed while the hot chili was somewhat lost on me, with the garlic serving as an afterthought. Mustard, I believe, is a much more fitting because it cuts the buttery texture of the raw fish.

Don’t come to East expecting all-you-can-eat seafood. It’s a solid restauranteur effort by nightlife connoisseur David Judaken (MyHouse, Opera) meant to impress and if shellfish on the half and in the scene is what you desire, this is the spot you’ve been looking for. It’sÂ a great pre-concert spot to complete your million-dollar night and to reveal your classy yet discriminatory taste. After all, if you’re also in the area - who wants to park twice? 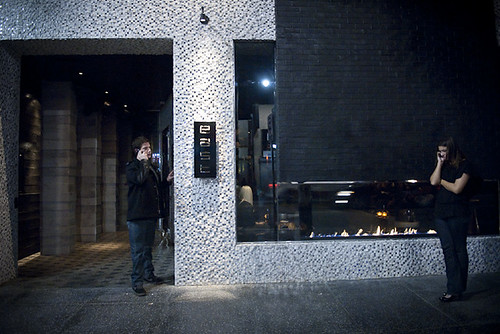