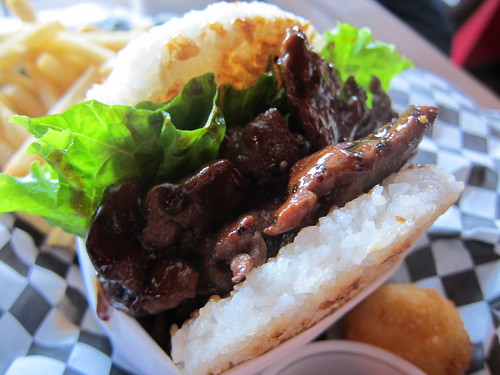 [/caption] Perhaps the Taiwanese burger is so-named more because of Bun Bun Tea House’s location in Arcadia than as a result of its origin. Modeled after MOS Burger, which is popular in Taiwan but originated in Japan (and is now the second-largest fast-food franchise in Japan after McDonald’s), the burgers at this Arcadian tea house are a delight. [caption id=“” align=“alignright” width=“240” caption=“Spicy Chicken Rice Bun Burger”] 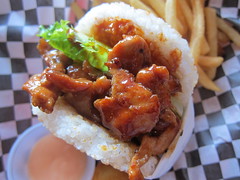 [/caption] It’s no matter that no one else in California even does these burgers - or maybe it is. They’ve got the monopoly onÂ Taiwanese burgers but theÂ ones I’ve tried at Bun Bun are solid. I really enjoyed the crispy textures of the rice bun and the “patties” were chock full of flavor. There is no ketchup and mustard in this burger (thoughÂ they are available if for some reason youÂ shouldÂ want them); instead, you’ll find your burger seasoned with either their house aioli or with its burger-specific glaze. You can get a regularÂ fresh-baked-dailyÂ bun at Bun Bun, but the rice buns are rationale forÂ my trek out to Arcadia. My personal favorite was the combination of the crispyÂ rice bun with black pepper steak. And maybe it should be disclosed, here, thatÂ I haveÂ a love-hate relationship with black pepper steak: It was the best preparedÂ dish at the lone authentic-ish Chinese restaurant in Milwaukee my parentsÂ and I frequented during my childhood (we had to order it every time). Without implying that it’sÂ a difficult thing to prepare,Â this black pepper steak certainly topped that. The beef was tender and not over-peppered.Â There was just the right amount of sauceÂ - and since I only had a bite of a dining companion’s, I will certainly order this on my next visit. [caption id=“” align=“alignleft” width=“240” caption=“Bun Bun Storefront”] 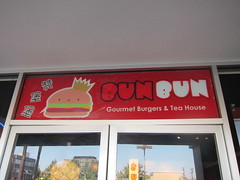 [/caption] I did enjoy my spicy chicken “patty,” or filling, as well - but there’s just something about the combination of the black pepper beef with rice that sings. Do beware of the American cheese, however, as a topping on the other burgers. I’m not sure what it is about a prevalent fascination with generallyÂ low-quality, oilyÂ cheese in Asian cuisine, but Bun Bun Burger is not exempt. I’m Asian - but I’m also from Wisconsin. The fries are of no detail. They’re skinny and they’re delicious. They’ll have you reaching from the table to your mouth with faster frequency than even your $4.50 almond milk tea. Yes, the fries are really that good and yes, your tea (with or without boba) will cost you half as much as your burger-fry combo ($8.50). But that’s okay in Taiwanese burger land, because how would they otherwise make their profit margin what is a sit-down tea house experience without tea? Also check out this great Q&A of co-owner Calvin Yao by Duke Chao on Taiwan543.net.