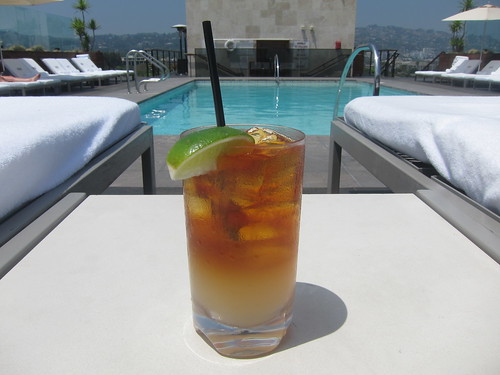 Dark & Stormy, Thompson Beverly Hills[/caption] Who doesn’t love a good rooftop in the summer? Fortunately, there are a few hotels around Los Angeles that are holding special events designed especially for the high peaks from which we can enjoy our Southern California sun … or sundown. At night, the city lights make for a beautiful view. Why not watch a movie against the outdoor backdrop, high in the sky? [caption id=“” align=“alignleft” width=“240”] 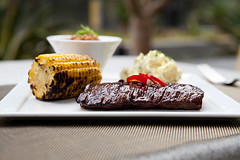 Blues & BBQ (Photo credit: Mi & Mo Photography)[/caption] The ION at JW Marriott at L.A. LIVE is hosting Blues & BBQ event every Sunday through September 2, 2012 from 12  – 4 PM at the outdoor poolside deck. Blues and soul musical guests like George Dez Blues Band and Gregg Wright “King of the Rockin’ Blues will be performing. For $18, you get one main entrée with side dish accompaniments 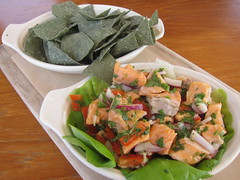 Salmon Ceviche at Thompson BH Rooftop[/caption] Thompson Beverly Hills Rooftop Summer Film Festival - Tuesday nights If a Beverly Hills rooftop is more your speed, check out the Thompson Beverly Hills’ on Tuesday nights for some contemporary classic films during their Summer Film Festival, serving eats and drinks from Caulfield’s. You can also purchase one of several packages with food and drink available at many price points in advance on the website - and they’re all set for two. Doors open at 7 PM while the movie starts at 9, so get cozy during sunset and watch the lights gradually appear around you with this 360 degree view. The admission is $20 and includes a small popcorn & soda. Check out the Summer Film Festival Menu. You can even buy tickets and preorder some packages for your pleasure. 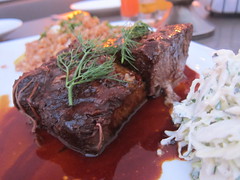 Ribs on the Roof, Peninsula Hotel[/caption] The Peninsula Beverly Hills Weekend BBQ - Saturdays and Sundays, 5 - 9 PM The Peninsula Beverly Hills is doing a rooftop BBQ on the weekends, and the eats are pretty succulent. Choose from 16 oz Bone-in Prime Dry Aged Harvey Guss Rib Eye Steak, Giant Tiger Char Siu Shrimp, Swordfish, and more. The Ribs on the Roof are made with a 24-spice rub and confited in pork fat. They’ve also got summery cocktails to accompany your BBQ, which I’ve tried, and was pleasantly surprised to find a couple very good ones that didn’t prove too sweet like you might assume. The jalapeno margarita is always a go-to, but I also found a good raspberry-gin substitute for a Cosmopolitan - made with real juice and none of that annoying tartness. See the Rooftop BBQ menu here. So enjoy the view, the breeze, the food and the menu. We’ve still a couple months left of whatever we call “summer” here in L.A., and these events are all the more reasons to enjoy them from on high.