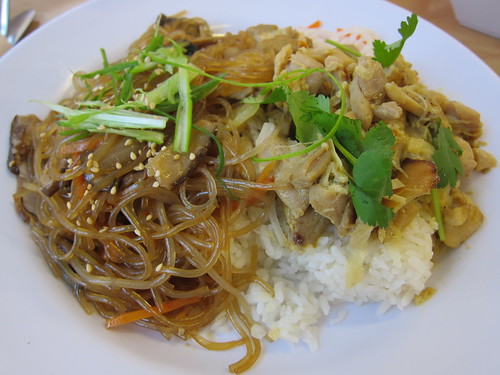 [/caption] In the case of the downtown hot spot (and once-underground) Starry Kitchen, it would be useless to do a dish-by-dish, plate-by-plate review as is protocol for food blogging, these days. Thank God. Because I would pick a constantly-changing (evolving, if you will) menu that focuses on a few dishes at a time over a huge menu just to leave me indecisively frustrated at all the options, any day. I am a simple girl, after all, having grown up on over-rice dishes interspersed with the occasional Midwest casserole and bratwurst-in-a-bun. Starry Kitchen gives me homespun, Pan-Asian flavors - and done well. It’s what my mother’s cooking would taste like if she were … Pan-Asian, and not just Taiwanese. If only I worked downtown, I could have more of these flavors to look forward to on a weekly basis. But no - instead I sit envious in my cubicle as I read tweets from fellow tweeting counterparts about how they’re having Braised Coconut Jackfruit, Crispy Tofu Balls, Lime Vinaigrette- and Ginger Peanut-dressed chopped salad, or Japchae. Oh nice. I’ve actually had that last one. The hugely ironic thing about it all is that Starry Kitchen is one of the best lunch deals in all of town - while being located _down_town. Everything costs less than $10 - and what’s more, try parking for $2 anywhere in Los Angeles, much less right in the heart of the business district. And now - the best news: Starry Kitchen will be open for dinner on Thursdays and Fridays starting this week. No one has to hear me whine about lunch, anymore. And I won’t risk getting in trouble with the boss for taking extended lunches because I drove downtown to eat. Win-win. Further reading: Starry Kitchen Starts Dinner Soon; Free Sodas Monday - Eating LA Profile: L.A. Luncher Nguyen from Starry Kitchen - Midtown Lunch LA