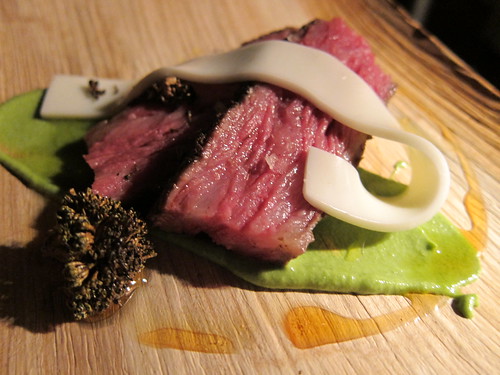 [/caption] It was a special night in overcast Santa Monica, when the rising star chefs (and mixologists) of Los Angeles came out to dance. Their individual tablesÂ showcased a dish of their choosing, with propped-up lamps shining into the coastal darkness. The Fairmont Miramar was the setting, with FIG hosting the bungalow-side VIP receptionÂ to precede the walk-around gala held on the hotel’s turnaround. [caption id=“” align=“alignright” width=“240” caption=“Apricot Tortellini from FIG”] 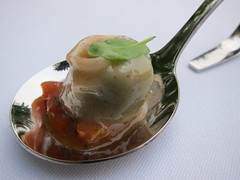 [/caption] FIG,Â headed up byÂ Chef Ray Garcia,Â was up for the sustainability award. Representing their fresh and inventive menu were spoonfuls of apricot tortellini - subtly sweet but tangy and way more complex than I could have imagined a sweet bite of pastaÂ could be. Also generously passed around were fingerling potatoes and chips topped with creme fraiche and Petrossian caviar. The generous part was undoubtedly the option to add a spoonful more of caviar atop each potato - a point Petrossian chef and James Beard Rising StarÂ Chef semi-finalistÂ Ben Bailly agreed with. RosÃ© champagne complimented each of our beginning bites, but nothing prepared me for what was to come during the main program of the night. [caption id=“” align=“alignleft” width=“240” caption=“The Highlander (With Highland Park 12)”] 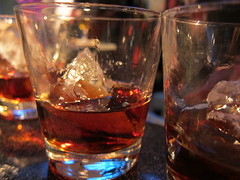 [/caption] The main sponsor of the night was Highland Park, and what a fortunate arrangement that turned out to be. Highland Park 18 was being served neat or on a big NÃ©ve ice rock. On the other end, Eric Alperin of the Downtown Los Angeles bar The Varnish served up The Highlander, a simple yet beautiful treatment to Highland Park 12 which the likes of Thomas Keller was also spotted sipping. Â  “The Highlander” by Eric Alperin of The Varnish 1⁄2 oz cherry Heering Liqueur 2 oz Scotch Whisky (Highland Park 12) Stir in a whisky glass over a big rock of ice. [caption id=“” align=“aligncenter” width=“500” caption=“Eric Alperin and Thomas Keller - Photo credit V.Wasik/StarChefs.com”] 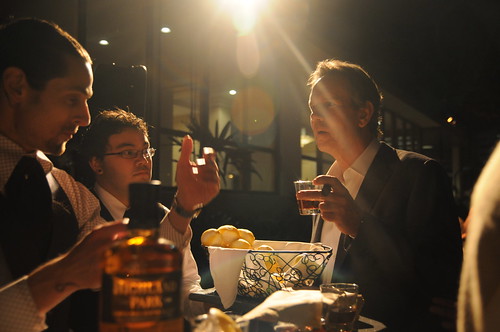 [/caption] The food highlights were almost too many to count. FIG showed up once again and proved why they deserved the sustainability (read: using every part of the animal) award. Say it with me: Bacon-wrapped bacon. With arugula to cut the decadence and heirloom cherry tomatoes to add sweetness, each bite of this dish was a little bit of heaven for hog-lovers. Add to their resume “sustainable host” as well, as all dishes the food was plated upon - no matter which restaurant - were made with recycled palm fronds. They were aesthetically pleasing and lightweight, to boot. [caption id=“” align=“alignright” width=“240” caption=“Bacon-Wrapped Bacon from FIG”] 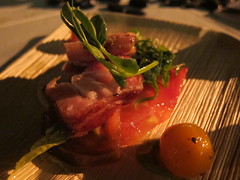 [/caption] There was a whole lot of savory to go around the entire event, too. Adam Fleischman’s Umami represented its successful multi-location venture with mini burgers furnished with a cheddar crisp in addition to the cheese melted onto the patty. Bouchon Beverly Hills celebrated their first successful year in Los Angeles by serving up veal sweetbreads to attending guests. Julian Cox’s (Rivera) Barbacoa was a meal in itself, a cocktail made with lime, ginger, red pepper, chipotle, Mezcal and, again…bacon. An unprotested theme. One thing’s for sure - I would take a Barbacoa over the best Bloody Mary out there, any morning time of day. Add spice to your life! [caption id=“” align=“alignleft” width=“240” caption=“Michael Voltaggio and Sous Chefs”] 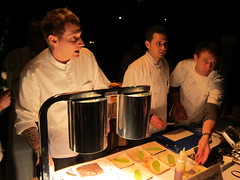 [/caption] Michael Voltaggio was also out to represent The Langham, plating wagyu with cheddar having the consistency of pasta atop the creme of the very dehydrated broccoli which served as the garnish.Â Voltaggio’s imaginative style is complimented byÂ a deferential demeanor. It took much restraint on behalf of my campanions’ and me to stop gawking at the lady whom we overheardÂ askÂ Top ChefÂ for a “slice of [wagyu] meat that’s well done.” (Voltaggio merely repeated, “Well done?” with hardly a note ofÂ incredulity.) [caption id=“” align=“alignright” width=“240” caption=“White Chocolate Cubes With Soft Beet Cake Base, Cacao Fruit, Sweet Compressed Frais du Bois Strawberries, Elderflower and Kaffir Lime- Jordan Kahn (formerly of XIV)”] 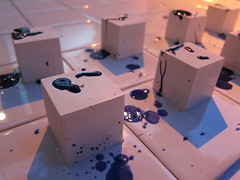 [/caption] And dessert. Pastry chefs Jordan Kahn formerly of XIV and Adrian Vasquez of Providence came out in full force and impressed with artful, sweet and complex bites. Kahn’s purple-splattered, white chocolate cube encased frais du bois strawberries andÂ beet cake with elderflower syrup - plated upon matching white tiles. This is one of the most imaginative yet simply delicious desserts I’ve ever had, ultimately saving me the guilt of destructingÂ the art piece in order to consume it. Adrian Vasquez’s Kalamansi Gelee, Lychee-Shiso Sorbet and White Chocolate-Coconut-Soy-Milk-Soup was refreshing and light. And gone in two spoonfuls. Perhaps if there was more I could appreciate the nuances in the soup; the gelee’s delightfulÂ texture was not lost on me, however. There were a ton of accolades sung by chefs about their colleagues who were being celebrated that night. So in addition toÂ theÂ plates, cocktails and wine, it was a special place to be, witnessing Thomas Keller honoring Rory Herrmann and together with John Sedlar praising Jordan Kahn. Or hearing the story of Kuniko Yagi walking straight intoÂ Sona in her bid for a job in their kitchen. For the passion and for the excellence, the talents of the rising chefs of Star Chefs came together forÂ an impressive collaboration to showcase the best of Los Angeles dining. Further reading: Star Chefs Flickr set Listing of Rising Stars - Star Chefs Website Rising Stars Shine at the 2010 StarChefs Review - Thirsty in LA Top 5 Tastes From 2010 Star Chefs - Food GPS Star-Hopping: LA’s Culinary Luminaries Honored at Gala Tasting - LAist