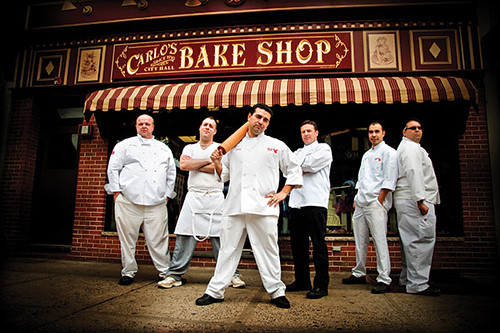 [/caption] New Jersey’s Buddy Valastro, whom you may know as TheÂ Cake Boss,Â just became aÂ New York Times best selling author.Â He’ll also be appearing live at The Orpheum next Wednesday, November 17th,Â on the Los Angeles stop of his “Bakin’ With The Boss” tour. It’s going to be a family-friendly evening of stories and cake demonstrations inside one of the most beautiful venues LA has to offer. So how, exactly, do you get to spend an evening with the Boss of The Learning Channel?Â You can see about ticketsÂ here - and/or enter my giveaway for two ticketsÂ (value ~$100). Make sure you do BOTH things below to enter. If I pick your name and you haven’t done both to qualify your entry, I’ll haveÂ pick another one:

The contestÂ ends Monday (11⁄15)Â afternoon at 4PM, whenÂ I’ll pick the winner at random. The winner wins two tickets to Bakin’ With The Boss next Wednesday!!

Bakin’ With The Boss Tour