"Space Camp" at The Groundlings 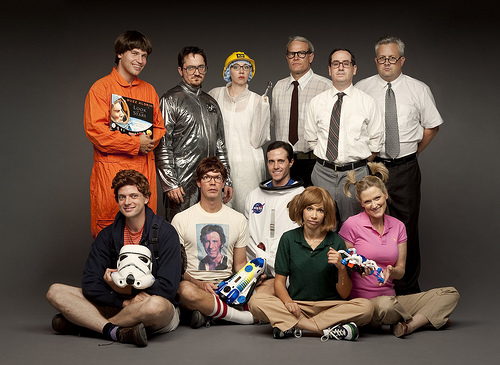 Off the bat: The Groundlings are hilarious. Theyâ€™ve earned their reputation â€“ and Iâ€™d be hard-pressed to find skits and improv of this caliber anywhere else in town. Complete with a live, spritely 3-piece band providing remixed and rearranged classics as set change music, your senses are titillated for a full 2 hours at â€œSpace Camp,â€ their latest compilation of knee-slapping skits and improv concepts. It was a privilege to see â€œSpace Campâ€ on its opening night since I was able to observe Groundlings alumni come back and support the latest effort. There were tons of faces I half-recognized â€“ and then there was Cheryl Hines who, last time I ran into her, I literally almost plowed over in a Johnny Rockets. But I felt a fly on the wall observing close family and was able to admire the tradition holding together the troupe for the past 35 years. After all, this was the training ground for a many present and past Saturday Night Live and Mad TV cast members (Jon Lovitz, Mike Myers, Conan Oâ€™Brien, Cheri Oteri, Will Ferrell, Maya Rudolph, Kathy Griffin, Chris Parnell amongst others).

Space Camp is a theme. Camps of people are involved in every skit and space is also used. Lasers are sometimes incorporated â€“ and apparently there are lasers in space. Some character sets are â€œspaceyâ€ andâ€¦ What does it matter, anyway? A personal favorite was the solo skit Welcome to Toastmasters featuring Tim Brennen, complete with shirt-stained armpits, who plays a nail-bitingly awkward Master of Ceremonies for a meeting of the infamous public speaking group.

Space Camp or not, the Groundlings also remain relevant. One skit spotlights a fan obsessed with Kobe Bryant in an interview after their NBA championship (Kobe) while another gives a protector gone bad in a Terminator-gone-back-in-time-to-save-me situation (The Protector), the latter of which had me almost rolling on the floor. And a great thing: The installment of physical comedy of the night didnâ€™t disappoint. It came in the form of an Americaâ€™s Best Dance Crew audition â€“ but I wonâ€™t spoil the rest for you. You should see it for yourself. Ingenius choreography, outfits and music. And when it came to flambouyancy in general, The Groundlings were spot on. From rico suave, foreign hostage holders (Hostage Situation) to gay parents (Principalâ€™s Office) visiting their childâ€™s principalâ€™s office, the laughs never stop. The groupâ€™s talent also came through when it came time to improvise. I was

impressed. Timing was on â€“ as if they were performing a skit â€“ and each improviser was adept at honing their ad hoc comedic intuition. The Groundlings are a joy and non-stop fun. Theyâ€™re your best bet in sketch comedy in this ever-competitive entertainment breeding town that is Los Angeles, which speaks volumes. Iâ€™d visit again â€“ Iâ€™m certainly curious about their other shows. See below for details. At $15-$16.50 per show (or $13.50 for group rate if you can get a gangload of people together), it’s definitely worth your time.