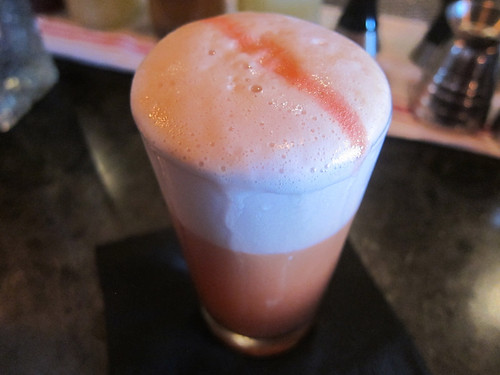 Dux di Lux - Luxardo Bitter, fresh lime, dry vermouth, Luxardo maraschino, egg white, housemade amaro “Sotto-pop”[/caption] With amaro cocktails being really popular right now - and with good reason - you can count on there being one to three of them on the menu of any semi-serious bar program. But I can’t think of any other bar that even compares to how Julian Cox’s program at Sotto has really advanced the cocktail classification in Los Angeles. [caption id=“” align=“aligncenter” width=“500”] 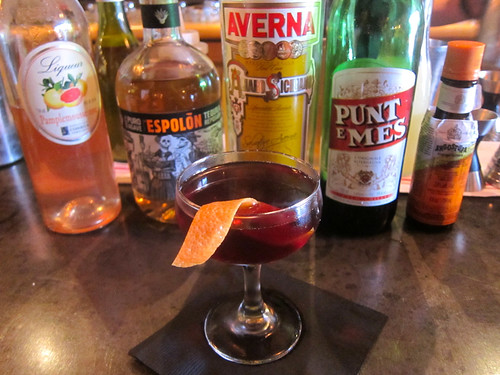 Modest Mousse[/caption] Just last week, they launched a brand new, Spring cocktail program - the last collaborative effort between Julian and Nick Meyer, before Nick moves on from behind the stick at Sotto to help out with the larger set of cocktail programs under Bill Chait. Though some of the cocktails were under wraps for later that night, it was the most exciting menu I had experienced in awhile - in no small part due to my affection for amari. [caption id=“” align=“alignright” width=“240”] 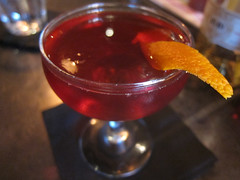 La Camorra - Rittenhouse rye whiskey, Pierre Ferrand 1840 Cognac, Campari, Carpano Antica, orange twist[/caption] The Modest Mousse was an elegant blend of Espolon reposado, Averna, Punt e Mes, Angostura orange bitters, Pamplemousse Rose liqueur and grapefruit oil. It had an amazing amount of balance to this drink, and definitely a great one to introduce your friends to amaro cocktails in general. The amaro flavor is at the forefront and the grapefruit liqueur and oil eases you into the cocktail without dumbing it down. So modest. So good. If you’re looking for a cocktail that’s more inspired by the classics - or at least a combination of them - the La Camorra will be right up your alley. Somewhat of a cross between a Negroni, Boulevardier and a Vieux Carré, it’ll be sure to transport you to a combination of Italy, New York and New Orleans. Aromatic (it says right there on the menu), familiar and everything you could really ask for in a classic stirred. [caption id=“” align=“alignleft” width=“240”] 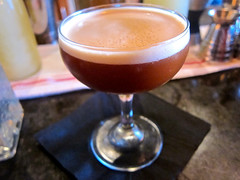 Return of the Daq (Oh my God!) - Smith and Cross rum, Zucca rhubarbaro, fresh lime juice, Maraska maraschino, fragola[/caption] Further down the menu, we’ve got an amaro-daquiri mash-up called the Return of the Daq (Oh my God!), which was a really fantastic-tasting ode to Karen Grill in a former Sotto era. Combining my favorite rum (Smith & Cross) and one of my favorite amari, (Zucca, made with rhubarb), this cocktail was shaken heaven. The “fragola” listed in the cocktail ingredients is a purposely misleading Italian translation for “strawberry,” prevents any wrong conclusions from being made about the cocktail. And with good reason - it joined the Smith & Cross with the rhubarb amaro so perfectly. I loved this! (By the way, cue up that R&B beat if you don’t get that parenthetical tangent to the name.) Don’t hold the fact that it was the easiest cocktail to go down against the Dux di Lux. It was, yes, luxurious, essentially evoking an amaro cream soda and incorporating the ever fantastic, house-made, house-bottled Amaro Sotto-pop. But all of this made for a deceptively easy sipper. It’s a fantastic, boozy drink, proven by the fact that the bottles themselves hold finished cocktails and can be ordered on their own (in addition to two other bottled cocktails: the Byrrhberry and Diced Pineapples). I liked this so much, it could’ve had its own category within the cocktail menu: Dessert. So head in to Sotto as soon as you can. It’s rare to have a cocktail program so top-notch and yet so specialized as this - and with a food menu legacy as stellar as Sotto’s, to boot (this is not the place to settle for bar bites). In fact, I can’t wait to try the other ones. I can’t believe I’ve gone through only a third of it. Time to get to work. All cocktails were hosted.