So I've Been Snowboarding. A Lot.

It may be somewhat ironic that I spend so much time snowboarding (15 riding days thus far) but have yet to blog about it more than a couple times this season. This season would be the one, though. I have a season pass to Mammoth - so it’s agiven that I do most of my riding there - but it’s my first time taking trips more than once elsewhere. There was Utah, and there was Whistler Blackcomb.

I’ve become conditioned to feel that adrenaline pumping at the mere sight of fluffy white from the sky. 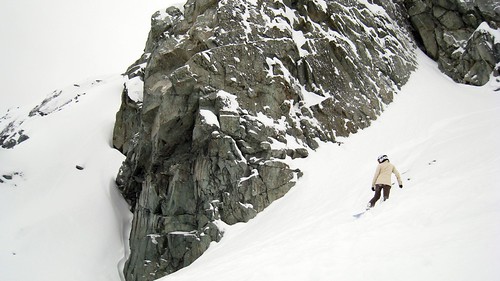 The rush of high speeds down slopes of white, soft goodness. The easier the turn, the better the conditions…the more conducive to learning switch and dropping in at all angles. The farther away from hard, choppy moguls - the better.

Because I go so much, I’ve gotten picky. But I hate to be ungrateful. 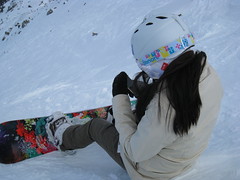 So anyway, here’s a shot at the truth. Truthfully speaking - Utah lived up. That champagne snow everyone talks about? It’s true - as long as the temps are right. The backside of Snowbird: Priceless. But Whistler failed, my friends. And while we were doing hard and fast runs between our hikes to Blackcomb glacier or off the beaten path outside Whistler groms - I would get Mammoth Dump Alerts via email to my BlackBerry. Salt in the wound, much?

Had to count the blessings in Canada. Somewhere new to ride, somewhere big. Different scenery and more stashes to find - somehow, some way. The very act of AprÃ¨s ski itself is infinitely better in Whistler Village than in any other resort town in North America. (Meanwhile, back in Mammoth - we’ve yet to count more occupancies than vacancies in that village.) We had our fill of Zog’s Dogs, probably also the best North American hotdog stand, which sold Beaver Tails and Poutins, as well - averaging at 3 visits per day. Yes! Per day! 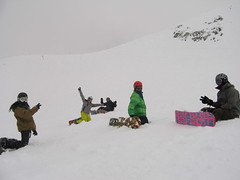 Second day of riding, I had a tumble on Blackcomb glacier. It was like any other run we took back there beforehand and would take afterwards. I got more speed than I could handle and subsequently tumbled. I felt my humerus come out of the socket briefly to snap back in right after. Shock! Pain! Soreness. I had had arthroscopic surgery on this shoulder just short of 2 years ago in which half the circumference of my labrum was reattached to my shoulder socket with 3 titanium hooks - the only reason why it had snapped back into place on the glacier. How much of the surgery had been reversed is still TBD pending appointment.

So with mediocre conditions, the definite highlight of the trip was visiting during a demo weekend. After some fully-dressed-in-Burton (read: n00b)San Francisco yuppies were done, we had our time toÂ monopolize the Lib Technologies tent and got to try out ‘09-‘10 boards that weren’t even in production yet. Magne-traction (beveled edges) and Banana tech (reverse camber/rocker) galore! I demo’ed the B-Pro BTX - which was worth their while because I really want the board now. The Banana tech makes it easier to turn, and I had missed the Magne-traction on my Ally MTXÂ - the board I didn’t bring because it was a shorter length. I’ve become dependent on the MTX to keep me from sliding out…little did I know I’d need it for the hard, icy pack that I wished was in Mammoth instead of Whistler. 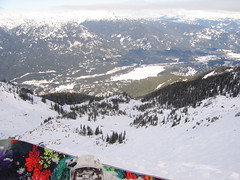 The grass is always greener.

It was good to ride regardless. I just need to visit Mammoth soon for some more of the pow they got coming. Call me a pow chaser!