Snowboarding Under the Moonlight

I can’t take any credit for having found out about it, but Katie’s brother Matt and his friends got a tip from a local about “the spot.” It was a place in Mammoth where you could get dropped off, view the entire town from the top of the slope while skiing down - and your drive can easily drive to a pickup spot at the bottom. Night boarding in Mammoth? Awesome. Especially since they had staked out the stash the night before, I was eager to reap the rewards of their labor. And this is what we got: 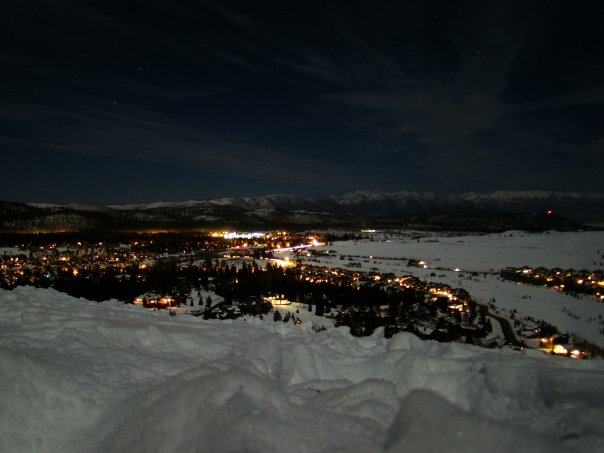 It was a truly beautiful view. I had never seen the town of Mammoth from this perspective - at night nor under the stars full moonlight.

It was a nice, steep slope too. All was calm and still. And when you looked back at the hill, you also caught a different sense of appreciation. It couldn’t have been a more perfect night to experiment with night boarding - it was a full moon: 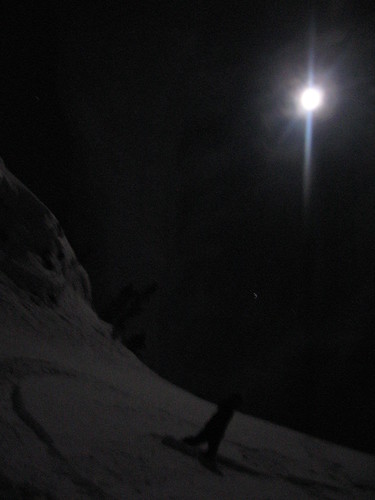 The snow was pretty fresh as in it hadn’t been tracked - but old in the sense that maybe it had a layer of the krusties on top. No matter, because it was certainly fresh underneath. When you tackled the slope, the moonlight gave it an exciting kind of mystery. You didn’t know if you were going to hit a rock underneath or run into one because you couldn’t see - either way it was a different kind of rush than the one you get in a white-out. Our first time coming into the bottom, single-file into a walkway, we managed to avoid (er, ski/snowboard past) a couple walking their dog. We felt apologetic about riding in and surprising them in that way but they seemed unfazed - like it was business-as-usual in a day of the life of a Mammoth resident..

We took turns driving Rob’s truck back down the hill for the pick-up after a total 4 runs down the slope. Nearby, a house party was being had with people watching us from out the back bay window of the house. They yelped and cheered for us as we cheered back.

They understood our thirst for a fresh stash.