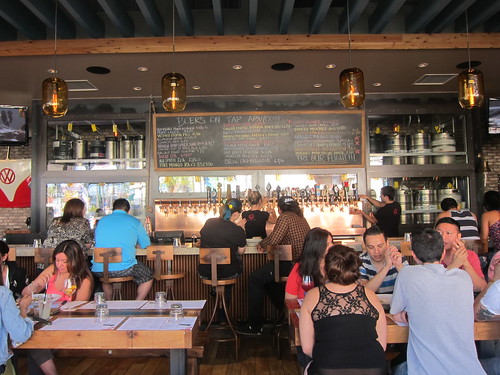 Daytime view from open patio at Simmzy’s Long Beach[/caption] Long Beach is that sister city, south of Los Angeles. If you are one who truly loves being an Angeleno - without the irony, that is - you accept The LBC as the L.A. away from L.A. Each block is potentially completely different from the next, and it’s one vast county hosting a cornucopia of cultures and backgrounds. [caption id=“” align=“alignright” width=“240”] 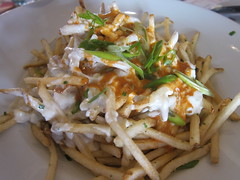 Blue Cheese Haystack[/caption] And then there’s Long Beach-Belmont Shore. At Simmzy’s second location, their corner on the block is bustling with flip-flops, beer and pub food. It’s a true pub without having bowed to the recent “gastro-” trends as of late. Besides, Simmzy’s are beachy places without the beachfront. People sometimes just want good weather, good beer (offered up by two dozen taps), a good time and good food - not groundbreaking culinary trends. While I tend to think the Manhattan Beach location is a tad small, the Long Beach one also has no problems filling its space to the gills. They’ve got day-of-the-week special, which happened to be the Short Rib & Chocolate Porter Chili on Saturdays - a sweet, tangy treat. Though their crust is not a lot to write home about, their pizzas showcase some original topping combinations, such as a smoked Bacon & Date Marscapone, made with garlic, mozzarella, sage and balsalmic syrup for a slightly sweet treat. And while I know that Brussels sprouts are a bit of a shoe-in for many places, I can’t say that I’ve had many executed so impressively as their carmelized rendition, with butter, garlic, lemon, anchovies, capers and bruschetta for a succulent yet zesty combination. [caption id=“” align=“alignleft” width=“240”] 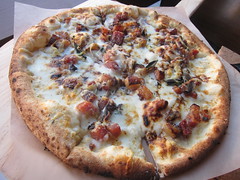 Bacon Date & Marscarpone Pizza[/caption] As for the other starters, the Ahi Tartar does the trick, as do the spicy, sweet 15 Minute Wings, but the thing to not miss is the Blue Cheese Haystack. It’s essentially savory crack that will have you bringing your hand from the table to mouth over and over again since you won’t be able to stop. The go-to dessert? Undoubtedly their Apple Filled Donut, topped with vanilla ice cream and crushed pistachios. Yes, this particular donut is also glazed and there’s a salted caramel sauce to put it all together. Simmzy’s is a no-nonsense, beer-centric place that makes Long Beach ever appreciative of their expansion. On tap, you’ll find PBR but also Ballast Point, Port Town, The Lost Abbey, special Sam Adams selections  and Cismontane. Deschutes, Alesmith and Flying Dog, too. The indecisive fool’s best bet (that is, my best bet) is a flight of your favorites. If beer isn’t your speed, sangria is always available for those lovely sunny days. This place will be on my Long Beach go-to’s - because after all, it’s Belmont Shore, a fabulous part of Long Beach and a far cry from the quality - or lack thereof - the downtown chains afford. All food and drink were hosted.