See You at the Kentucky Derby Viewing Party at L.A. Athletic Club 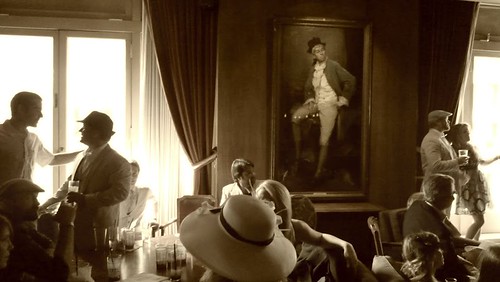 [/caption] Ack! I’ve been having server issues. So apologies for the lack of updating, but I’m migrating to Dreamhost, so hopefully that’ll be the end of that. And…we take off… Cinco de Mayo parties are pretty much a dime a dozen, but this year I’m taking the 5th to the Los Angeles Athletic Club. Which means that I’m actually volunteering to dress up! And putting on a big hat! I love tequila, but with Marcos Tello at the Hold Your Horses viewing party held on the swanky, newly remodeled 3rd floor of the Los Angeles Athletic Club, the Kentucky Derby is the way to go. For $30, you’ll get entry to the party, a Mint Julep, buffet, games and live entertainment. Of course, we can’t forget the “Great 2 Seconds in Sports” on multiple screens. Marcos will also be serving whiskey flights, Bourbon cocktails and others. Pretty much a win-win. Not only that, but you can continue the Derby shenanigans by using your entry ticket to head on over to 7 Grand for another complimentary cocktail for their Bulleit Kentucky Derby party . (Just remember that there’s a $20 donation at the door to support women bartenders affected by breast cancer - a great cause!) See you tomorrow!!