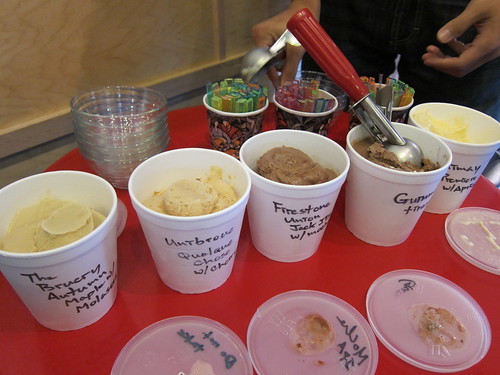 [/caption] We’re in the middle of LA Beer Week and that means it’s time for Tai Kim’s beer flavored ice cream to debut. Yes - that means that today, perfected versions ofÂ flavors like Unibroue Quelquechose With Cherry, Guinness Tiramisu, Chimay Premiere With Apricot, Firestone IPA Union Jack With Mocha, Lost Coast Tangerine Wheat Ale With Hazelnut and The Bruery Autumn Maple With Molasses will be at Scoops on Heliotrope for all beer and ice cream enthusiasts to enjoy. (Though, I’m told that The Bruery’s Autumn Maple may be too hard to acquire to make this flavor, unfortunately.) [caption id=“” align=“alignright” width=“240” caption=“Tai Scooping Ice Cream”] 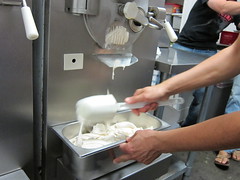 [/caption] A couple of weeks ago, a few bloggers and I were invited to preview the making of these special flavors. It was so fun to see Tai at his machine, pouring in his special concoctions and, of course, the beer. Curious for more? Be sure to pop on over to Caroline On Crack’s post on this preview for her great videos of the action. My personal favorite was definitely the Lost Coast Tangerine Wheat Ale With Hazelnut. What can I say? The beer flavorings are very subtle - but I I’m a sucker for hazelnut, and it was one of the most potent flavors and the wheaty tangerine was a nice spin on things. So head on over to Scoops today, and find out one of the sweetest ways to celebrate LA Beer Week. I’m curious myself to see what flavors actually came out of all that experimentation.