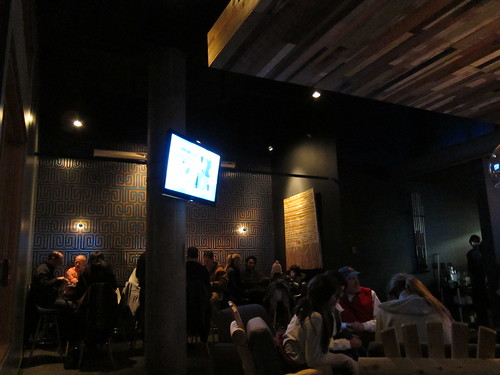 Consider a ski resort town in the Sierras built on local pride - a bevy of locally-owned restaurants and bars intermixed with a couple imported chain restaurants and brand shops. A couple. Though not close by any sane standards - a minimum 5-hour road travel or 1-hour flight - Mammoth is to Southern California what Lake Tahoe is to Northern (that is, with a 1-resort monopoly). One thing is for certain, however, and that would be the recent strong push to make Mammoth Village a legitimate…well, village. Plagued by vacancies within its Intrawest-managed store fronts until recently, Mammoth Village and its dwellers can now rejoice at the recent opening of Starbucks, for example - joining the ranks of Ben & Jerry’s, Pita Pit, Ye Ole Dubliner, Lakanuki, Sushi Rei, Quicksilver and more. The Village would go where Hennessey’s (closed) could not. 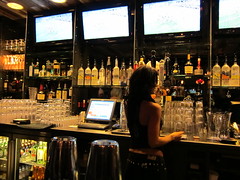 Enter Sam Nazarian’s SBE - the conglomerate with the backing of Hollywood scenesters (Area, Hyde) and Los Angeles foodies (The Bazaar at SLS Hotel) alike. While Hyde in Hollywood may be on Sunset Strip, Hyde Lounge, Mammoth is across from the Village gondola and opened last Friday to much hurrah and hubbub - what with the entire space packed shoulder-to-shoulder with skiiers and snowboarders. So I heard. I waited to visit until its second day of operation with a 2nd round of aprÃ©s-ski; my 1st round would be spent at White Bark inside The Westin, which is also fitting to mention. The Westin is another Intrawest property that opened recently and it, along with the Ritz Carlton, indicate the resort area’s move towards increasingly upscale accommodations. Fewer such options are available at SoCal’s local mountains, which are increasingly known for their “youngster” scenes populated with “park rats” and more time on runs spent dodging others than actually riding. (Full disclosure: I learned to snowboard in college at these local resorts and am grateful that that was an option at that time. My love for snowboarding would have never developed to where it is now without the vicinity of Snow Summit and affordability of a college pass.) 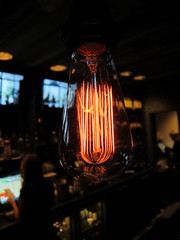 The good news is that though the establishment may have been an import (over half the bartenders were from LA, on my visit), the vibe of Mammoth Hyde Lounge was still warm and familiar. At the minimum, let’s thank goodness it’s not like Hollywood. A stupid amount of money was not spent on loungey furniture that would be subsequently be ruined by skiiers and snowboarders in wet clothes who just checked their equipment in at the ski and snowboard valet! (The valet was not operational yet as of my visit. We’ll see if/when that comes to fruition - hopefully soon!) Yes, though - the lighting was perfect, what with incandescent light bulbs - think Lazy Ox Canteen. Locals offered me their bar table seats because they were leaving soon (not Hollywood) and HD screens “littered” the “lounge,” complimented by impressively-clear audio of the NFL playoff game being broadcast (not Hollywood). Lounge, maybe - Lounge with the split personality of a sports bar, definitely. Adaptability is always a good thing, and it looks like SBE fit this bill quite nicely. On to the food… [caption id=“” align=“aligncenter” width=“500” caption=“Lollipop Wings (spicy Szechwan style, salted peanuts)”]”)[/caption]

Groundbreaking? Certainly not. But it’s worth it to look at their small plates menu ($7 - 9) to see some familiar favorites made with local efforts with Mammoth Brewing Company. Their onion rings are battered with Mammoth Ale, or you can have the Mammoth Ale-braised shortribs or Mammoth Ale-battered fish sandwich. Burgers run $11-15, entrÃ©es $14 - 24. It’s worth it to mention that I actually really enjoyed everything I ordered. Hyde, it seems, tends to have an affinity towards peanuts in their plates - which I may have credited to a Thai-leaning Asian influence but seeing as how their rather-excellent lollipop wings are described as Szechwan, I think I’m just going to go with its existence as a really accessible nut. This is Mammoth, y’see. “Okay with the Asian, enough with the weird.” 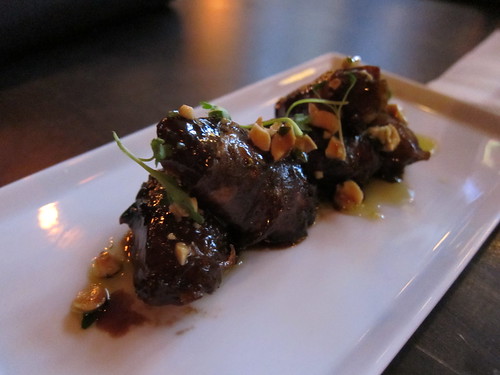 Truth be told, Sean and I really enjoyed the bacon-wrapped dates - complete with a dark, sweet sauce that almost resembled teriyaki, but not quite. There was also olive oil, and then there was a vinaigrette. The only problem was that the Manchego cheese and hazelnuts that they were described on the menu to also have were nowhere insight and in place of them were more peanuts. No matter - there was enough savory-sweetness enough to keep us more than happy. Will order again, for whatever rendition awaits us next - they had barely been open for 24 hours, total. The miso cod lettuce cups were appetizing enough, made with butter lettuce and topped with crispy filo - not a hit out of the park but if you like sweet Thai dressing, you will want to order these.

I’ve not had a proper meal at Hyde Lounge, yet - and I’d be curious to try out a few of the entrÃ©es. But the small plates experience is satisfactory - especially if you’re looking for a few good TVs. Let’s be clear, here - do not come here for a culinary breakthrough. Come here because of the familiarity that you may not want to admit you crave, and because you were late for the Whiskey Creek 4-5 PM 50%-off happy hour. And the Whitebark (The Westin) 50%-off, 2-5 PM aprÃ©s-ski. And don’t feel like spending the big bucks at Chart House. Or don’t see the point in going to Angel’s, anymore, because they stopped serving ribs. Just admit it: Visit Hyde Lounge because it’s new.

There’s no happy hour at Hyde right now, but supposedly one is in the works. I’m thinking they are content to rest on the laurels of their opening, if even just for a little bit. The “lounge” has a very surprisingly warm feel to it and there is plenty of seating area to graze amongst. Even so, I think it’ll still pack out for days - and may even be a precedent for other LA imports to come… Eeesh.

Welcome to Mammoth Village, Los Angeles. Now, will that be bottle service?