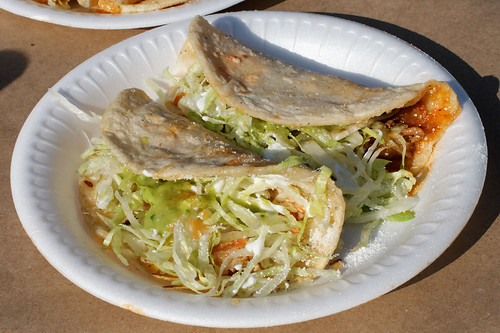 [/caption] I admit it. I made a huge mistake by missing the first ever L.A. Vendy Awards about a month ago, in May. And to this day, I suffer having never triedÂ a variety of O.G. andÂ N.S. (new school) street foodÂ vendors Â at the site ofÂ one, well-organized event. Of course, the argument of who’s who, we’ll leave out here. But one thing’s for sure - the vendor I reallyÂ missed out on was Nina’s Pambazos and Quesadillas, originally of Breed Street fame. Nina Garcia is notorious for her Pambazos, which Evan Kleiman, KCRW’s Good Food host and Vendy Awards Judge so vividly describes in this way:

The first bite of her Pambazo was like being hit in the face with a big punch of flavor followed by an incredibly comforting and satisfying textural surprise.Â  The torta, soaked in enchillada sauce then griddled became a sort of savory, spicy bread pudding filled with potato, cheese and chorizo.Â  Her Quesidillas are justly famous, a pile of cheese on the griddle turning into Queso Fundido thatâ€™s scraped into a corn tortilla made to oder and garnished with your choice of chicharron, zucchini flowers, huitlacoche etc.

The problem is that since her Vendy Awards honor, it has brought on the bad notorietyÂ along with the good.Â The police have had a bit of a time breathing down her back, lately - with her not-exactly-mobile operation being a griddle and tables. And so Evan, along with Erin Glenn, Chief Executive Officer ofÂ AsociaciÃ³n de Loncheros L.A. Familia Unida de California are trying to raise money in order to get Nina into her own truck. Thanks also goes to Bill Esparza who passed along the word to us food bloggers so we could get the word out to you. The Pambazo-Quesadilla-GorditaÂ Fest fundraiser will be held on Sunday from 11 AM - 3 PM at Angeli Caffe on Melrose just west of La Brea. Buy a Pambazo, Quesadilla and/or Gordita for yourself and everyone’s father. It’ll be the best tasting fundraiser you ever did help support. And you’ll also be helping toÂ sustain an important part of L.A.’s culture. If you can’t make it and want to make any size donation, please make your check out to Nina Garcia and send it to:

Check the menu for Sunday’s event below: