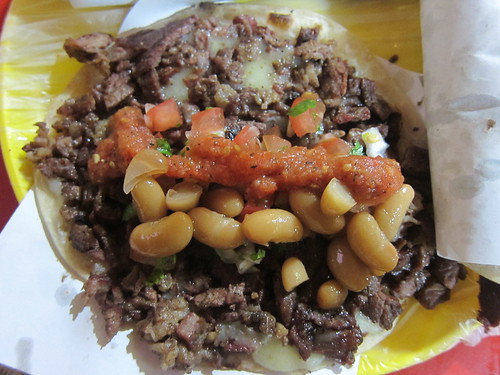 Carne Asada Taco[/caption] It was a late night in San Felipe when we decided to make probably our 10th stop of the day at El Filete. We ordered lips, tripe and carne asada as we were all eager to see what kind of tacos we had in store. Women’s boxing played on the overhead TVs in the heavily flourescent-lit shop, and I admit that I got really into it - including the surprising, Pacquiao-esque, end decision. [caption id=“” align=“alignright” width=“240”] 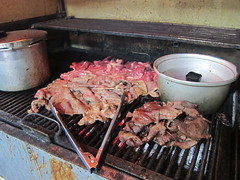 Mesquite grill[/caption] Bill had been on a mission for lips (labio) tacos and was excited El Filete had them. I, though eager to prove that I had no prejudgments when it comes to parts of the animal, preferred the carne asada ones by far. The tripe indeed was flavorful, but I loved how the carne asada really caught the flavor of the mesquite grill. It was also testament to the fact that not all carne asada is the same. Far from it. It was probably the most complex flavored carne I had had ever, and when I saw the grill, I could see why: The flame grill glowed with mesquite peeping out at the bottom. It was like I had never actually eaten real carne asada before; I found it almost preposterous how much better these tasted than anything I’ve had in LA when carne, in general, is so common. I guess that’s another way of describing something as “plain.” Call it the re-education of carne asada. Mesquite is where it’s at. I’ve really no other advice other than to get down to Mexico to see what it’s really supposed to taste like…