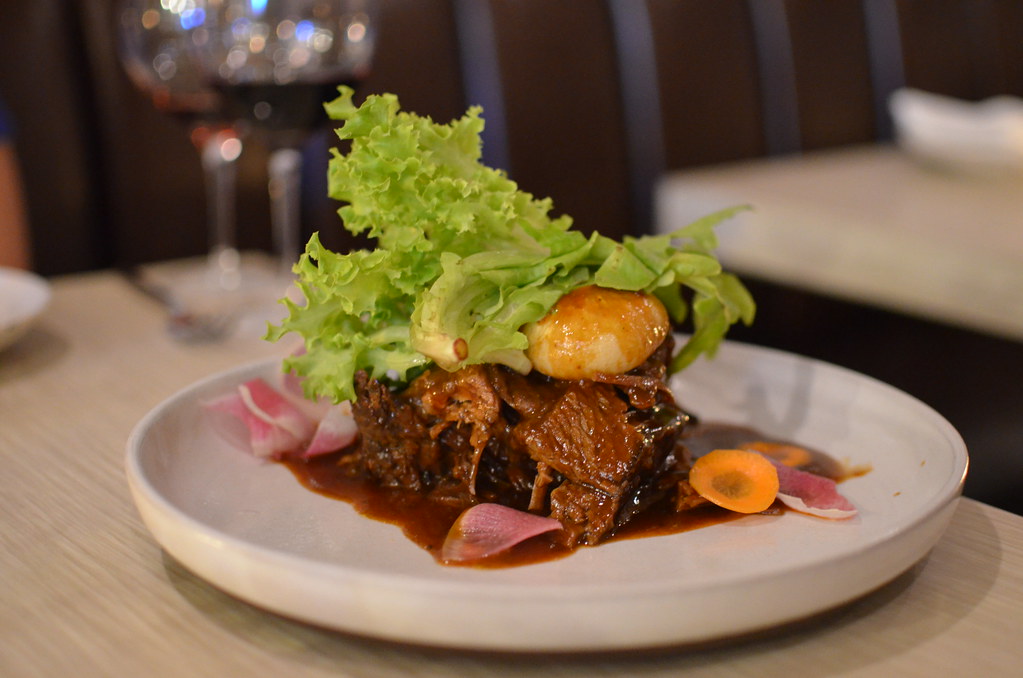 Pecan wood smoked brisket with hoisin, tiny lettuce & root vegetables[/caption] There’s something incredibly freeing, even liberating about a Western restaurant that sets up shop in a strip mall in Koreatown. While you’d find a stellar sushi restaurant - and Korean BBQ joint, for that matter - in many a plaza in Metropolitan L.A., you wouldn’t hardly ever find a modern American restaurant in one. But Saint Martha, named after the patron saint of cooks and servants and sister of Mary and Lazarus, demonstrates that this is where Los Angeles is, today. That smart, exciting food isn’t indicated by how hard it is to get a reservation, nor how hard a battle with L.A. sprawl is fought. The vibe was comfortably casual and inexclusive; I took the subway from my Spanish Revival apartment near East Hollywood. [caption id=“” align=“aligncenter” width=“500”] 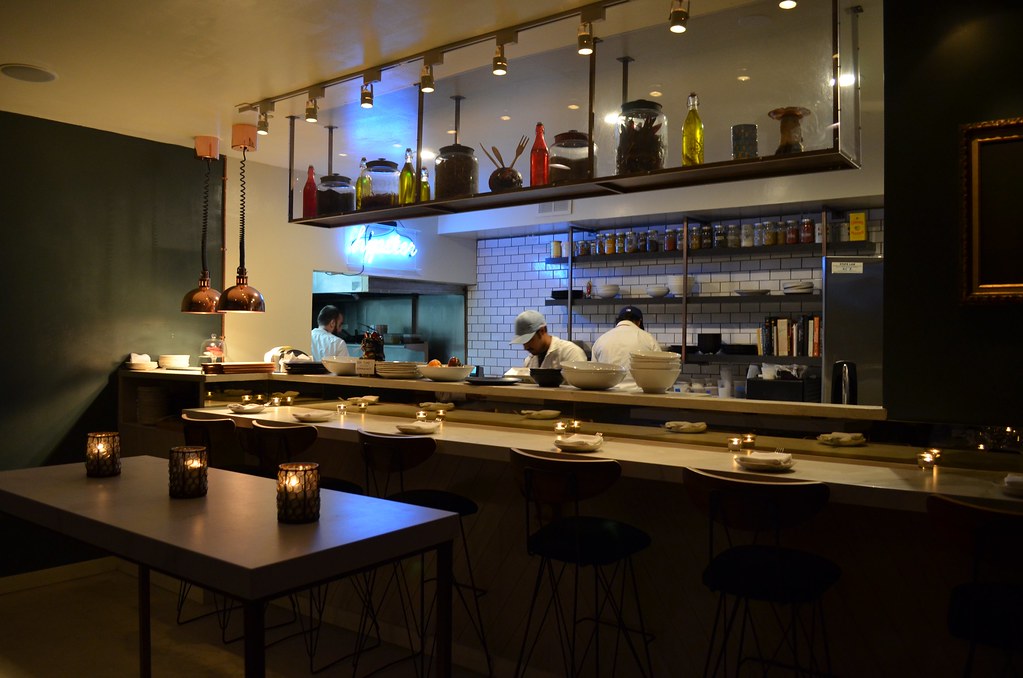 Interior[/caption] But the menu, you see, is a wonderfully edited yet varied bunch of twenty plates by Executive Chef and Partner Nick Erven (TART, Mess Hall) - all divided into categories like snacks, raw, vegetables and grains, seafood, and meat. The wine list? It’s three times as long, from which expert pairings are made by General Manager and Sommelier Mary Thompson (Jean-Georges Vongerichten’s Spice Market, Daniel Boulud’s db Bistro Moderne, Chaya Downtown). Even the diversity of the restaurant is evident in the wine, as we enjoyed varietals including a beautiful Chenin Blanc from Baja, a bright Blanc du Bois from high Texas. A lot of the pride in the wine list, it seems, is drawn from just how obscure the region is. [caption id=“” align=“aligncenter” width=“500”] 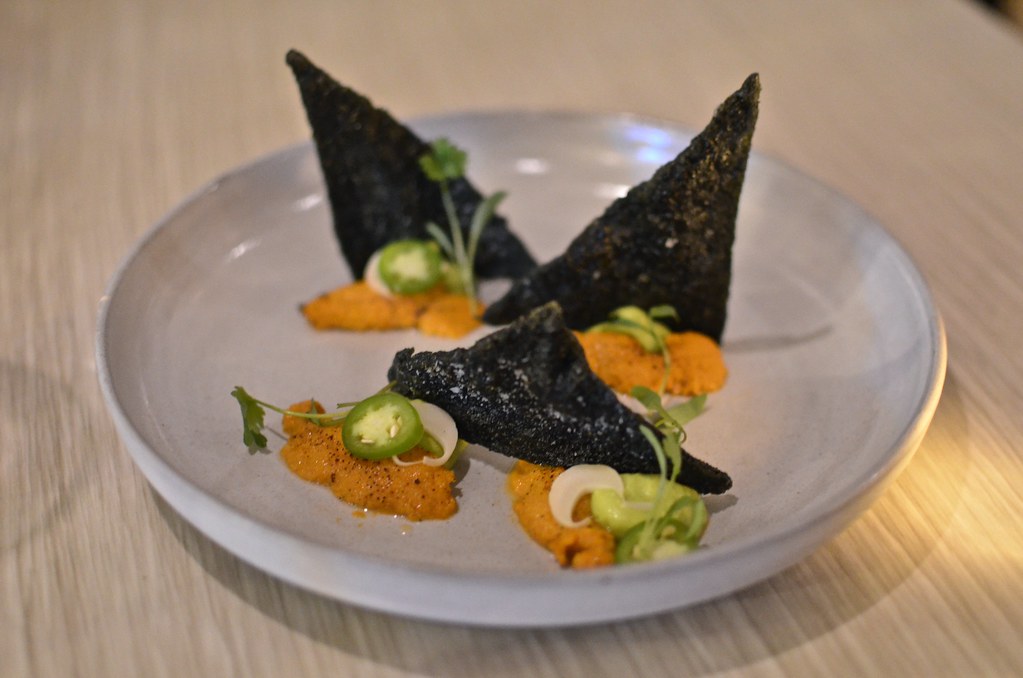 Uni Tataki on Seaweed Doritos[/caption] The visuals follow, too. The windowless dining room is a culinary incubator of sorts, with a strip mall parking lot exterior that could double as that of a dive bar. Chefs and cooks are adorned with beards, moustaches and tattoos. In homages to the cross culture of communities to which Saint Martha belongs, BAM Design Lab sourced art from Pasadena’s Rose Bowl Flea Market while Korean language lessons serve as the restroom soundtrack. And not so tongue-in-cheekily, ”Hipster” is proclaimed in neon blue cursive above the doorway of the open kitchen. The food is imaginative without being fussy. You will be amazed and thanks to the democratic price points, you’ll also be full by dinner’s end. And you also won’t have to do any choosing should you not want to, with five- ($65) and seven-course ($90) dinners available, as well as optional wine pairings (+$35 or $47). If you enjoy wine, you will want to do the wine pairings. Mary does a stellar job with pairings, allowing you to taste different nuances in each, sometimes pairing the same wine with different food and allowing your palate to recognize the different notes. Or you can order any of the wines, sakes or sherries by the taste, glass, piché or bottle - she will be happy to help inform your selection, either way. [caption id=“” align=“aligncenter” width=“500”] 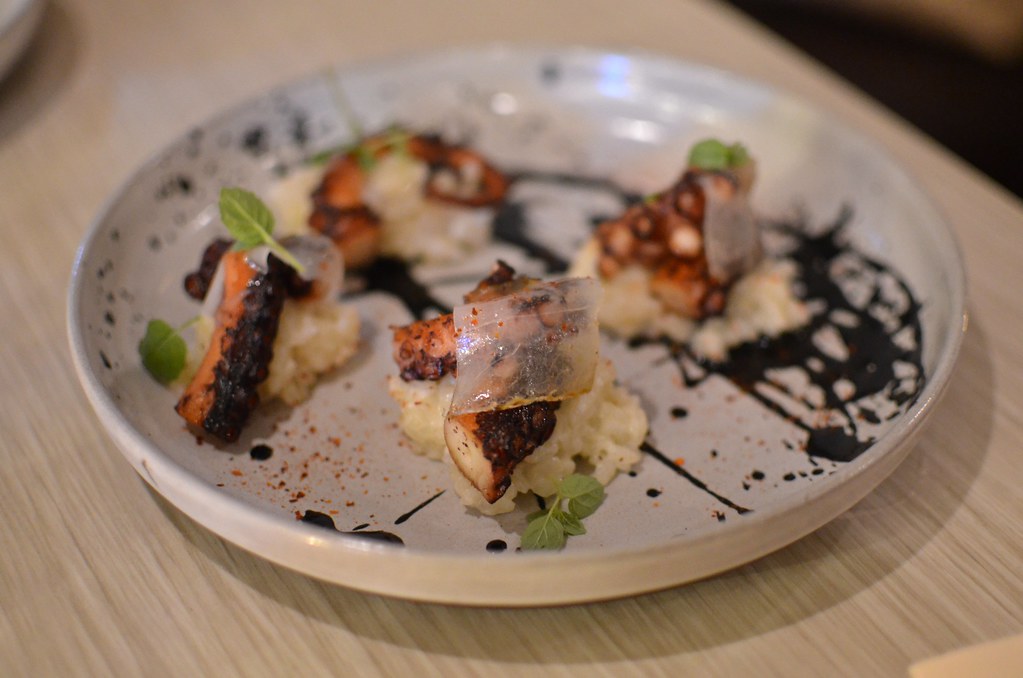 Octopus with Koshihikari Rice (cooked risotto style), sauce nero, lardo, espelette[/caption] Chef Nick Erven makes Doritos out of seaweed, at the ready to be topped with uni “tataki,” avocado mousse and slices of jalapeño and hearts of palm. It’s better than any possible rendition of uni on toast - should you like anything to be done to your sea urchin, period. The octopus dish is also a wonder, with tentacles resting upon nutty pillows of Koshihikari Risotto, both cooked to perfection. I used both of these to sop up all the squid ink on the plate, and savored each blanket of lardo, serving as a fantastic finishing touch. [caption id=“” align=“aligncenter” width=“500”] 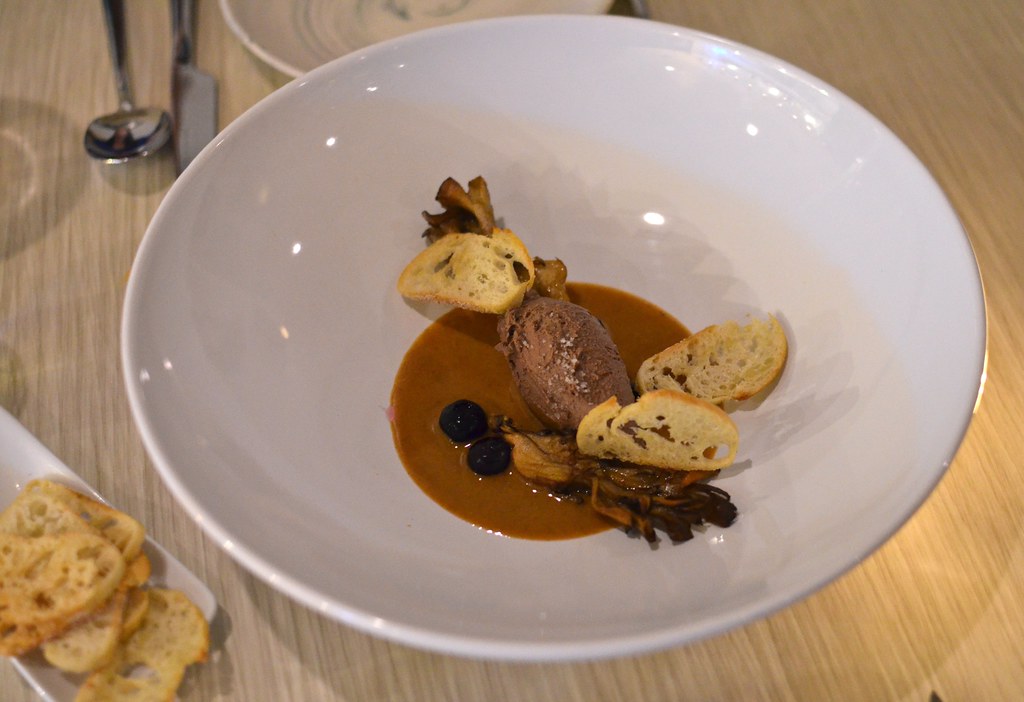 Chicken Liver Mousse, Hen of the Woods, hazelnut praline, pickled blueberries[/caption] And the Chicken Liver Mousse. While I hardly met a serving that I didn’t enjoy, the addition of hazelnut praline did color me skeptical (and sweet tooth-averse) while reading it off the menu. To my relief and delight, it was hardly sweet but instead brought out an amazing nuttiness. I loved the pickled blueberries, as well, which helped maintain the savory components. We were doing everything short of licking everything off this plate. [caption id=“” align=“aligncenter” width=“500”] 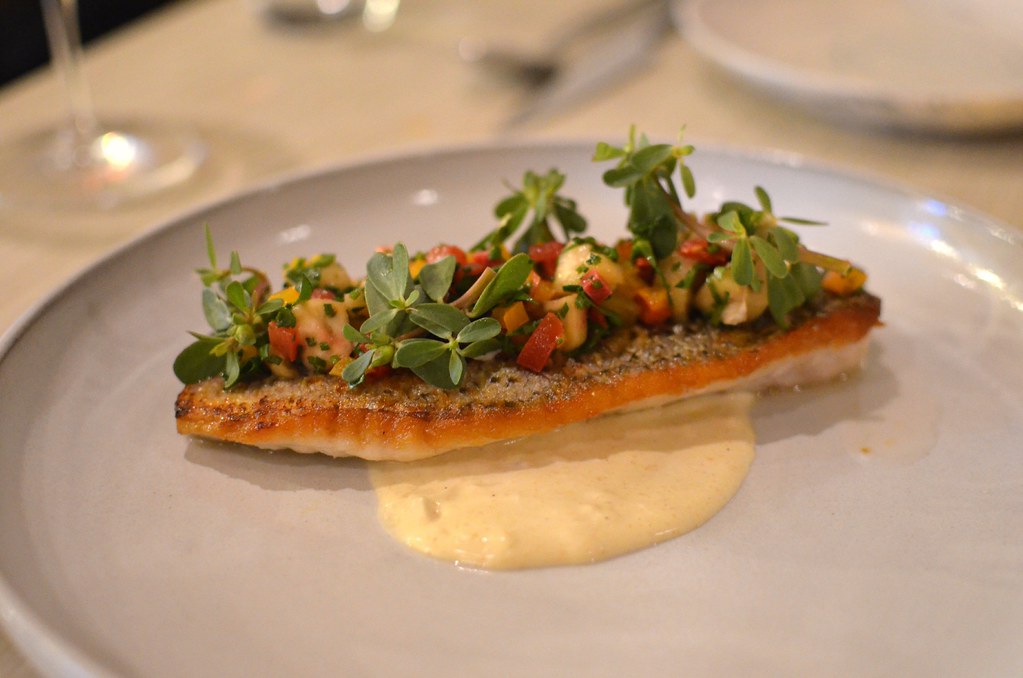 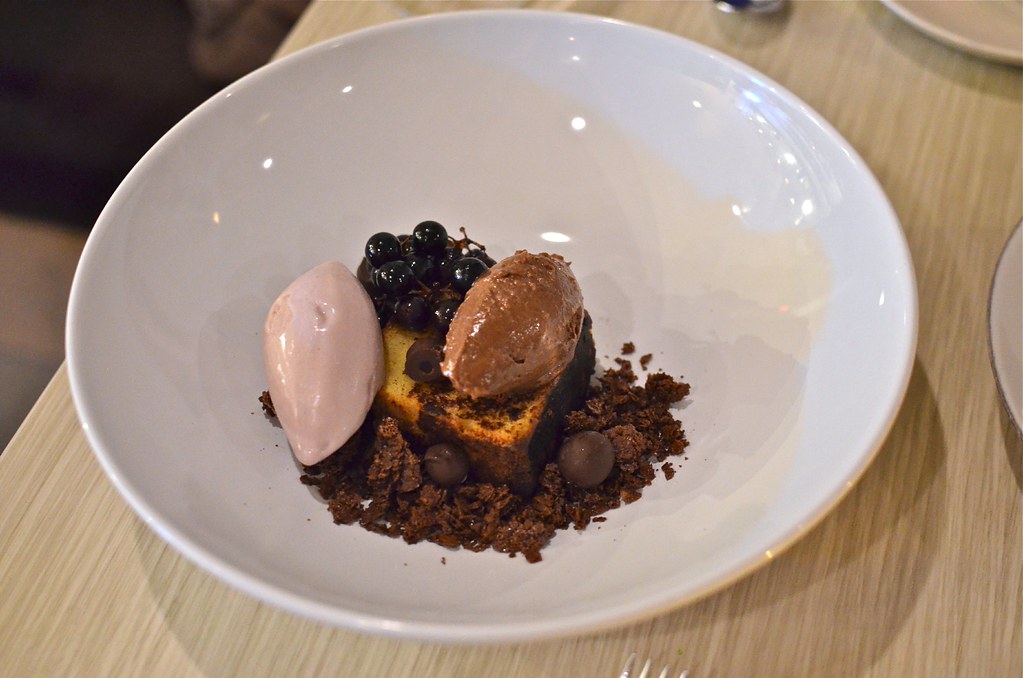 Peanut butter ganache, roasted grape ice cream, griddled pound cake, chocolate feuilletine[/caption] As for dessert, you might be craving an elevated PB&J, by way of a Peanut butter ganache, potent roasted grape ice cream, griddled pound cake and deliciously crunchy chocolate feuilletine. You might also want to try the Beet semifreddo with red berries, cacao crumble and meringue. Or order both. Koreatown is such an exciting place to eat, these days. I love that in a Los Angeles neighborhood already so rich in history and culture due to its namesake demographic, everyone can still have a hand in making it - and any other L.A. neighborhood - a community of their own. When I first moved to Los Angeles, I tended to describe the city more as a salad bowl, with each precinct somewhat co-existing side-by-side. That we’re seeing more mobility* between us, and willing to travel to other neighborhoods to experience new and even unexpected foods in each other’s communities is part of the evolving beauty of this city, bringing us closer to the melting pot we were meant to be. All food and wine were hosted.

* mobility across the 405 fwy excepted