Roving Mammoth Smuggles Burritos So You Don't Have To 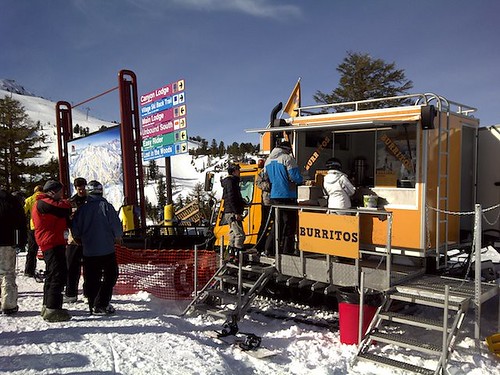 [/caption] _This article first appeared on LAist.com_ It’s known amongst California snow birds that while San Francisco and Sacramento snow sport enthusiasts flock to Tahoe, Angelenos looking for more ski-able real estate flock to Mammoth. If your commitment is intact, the choice is clear: The five-to-sixish hour drive rewards you with Mammoth Mountain’s over 3500 acres. I couldn’t be more surprised, then, that it wasn’t a local resort but Mammoth that took cues straight out of Los Angeles culture. Or could I? Friends directed me via Twitter to articles detailing that there would be food trucks retro-fitted snow cat food trucks, dubbed Roving Mammoth, parked right on the runs. While this past weekend marked my third trip this season to the mountain, it was my first time finally getting to try out this phenomenon-gone-snow. (For another such phenomenon, check out the new Art Park, a terrain park dedicated to Jeff Anderson showcasing artwork, complete with descriptions posted by each feature. What’s next? First Fridays?) Let’s be honest, when you get a record-breaking 17 feet of snow in December, the last thing on your mind when you’re on the mountain is to track down a food truck when your Monday through Friday, 9-5 is spitting distance from Miracle Mile. The first? Fresh tracks and tree runs. But now, having tried the burrito at a price point that undercuts anything at the four lodges ($9 baked potato? $7 slice of soggy pizza? $12 tostada salad?), I will make it a point to make a burrito break whenever I’m thinking fast and simple. I caught Neil Mallery, McCoy Station Manager, in action inside the truck at the major intersection by the top of Canyon Express (Chair 16) and Roller Coaster (Chair 4). Having debuted on Christmas, Roving Mammoth is in service Thursdays through Sundays. Just check the @MammothMountain Twitter feed to get the DL on which runs they’re doling out their $5.50 burritos. They go until they sell out, which typically happens around 3PM (or sooner, especially on Saturdays on Sundays). Pick from their green chile breakfast burrito with eggs, a chicken burrito, a beef burrito and a bean and cheese burrito. Thanks to their heated storage, the burrito was still warm and the pleasantries weren’t lost on my bare hands. I’ve never tried eating with gloves, before, but I’m counting on the burrito as the only viable candidate to do that with. No hot drinks are available yet, but grab a bottle of Cholula (or Tabasco) to take with you when you sit down at one of the plastic lounge chairs situated outside the snow cat, and you’ll pack some heat in every bite. The selection and price of the drinks and snacks are identical to the lodges’ (meaning you’ll pay as much for those as for the burrito), but the burrito itself was better than I expected. Beans - yes, rice - yes, ground beef - yes, fresh flour tortilla - bingo! I would have enjoyed more cheese and salsa since it was advertised, but there was no doubting that the medium-sized burrito I enjoyed was indeed made fresh that morning. There were good ratios of each ingredient, overall. Now, I’m just curious about that green chile in the breakfast burrito. Guess I’ll save it for my next visit. It’s no small point that there’s a good reason to actually sit down to eat your so-described hand-held burrito by the truck, as you would a food truck in the streets of Los Angeles, nouveau or O.G. Enjoy it while it’s warm and round. That is the advice I can offer from having made the mistake of putting my first purchase inside my jacket, meaning to ride down with it to meet my buddies at the lodge during their coffee break. You can guess what happened (it fell out of my jacket) - so if you see a burrito on that intermediate run called “Downhill,” down to Canyon Lodge, congratulations: You just scored a free, cold, hard burrito.