Jen basically read my mind in one of her recent tweets:

When you can’t think of anything to blog about, talking about your cat usually works. http://jen-sized.net/

It’s been awhile since I’ve blogged about my “kid,” anyway. He’s had some time now since I first adopted him last November to catch up and essentially become a cat version of me. 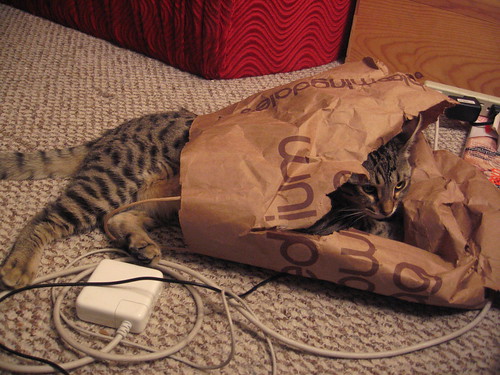 Yeah, he knows where to find the goods. Get there. To Bloomies.

I think the most rewarding thing about adopting a pet is getting to know his personality and lovingÂ him for whatÂ he is. Rufus, you see, has pretty distinctive personality traits. He’s an avid talker (meower), he’s jealous, he’s loyal and wants to be the center of everything. He’s also randomly hyper but then again technically he’s still a kitten.

But there’s this other part to him - he’s just a laid-back kind of kitty. A part of me is actually proud that he likes to lay on his back and just kinda roll around with his stomach exposed in all its glory.

If a catÂ just enjoys being on his back just talking to himself, I can be content knowing he’s a happy one. It makes me happy. He always seems to be saying something to me in such a manner - as if I understood.

It gets worse. My roommate and I - I swear we’re officially the crazy cat ladies of the building. Thank goodness there are only 8 units. Maybe I was foolish for thinking we could “contain” our insanity. I was coming back from dumping trash in the garage and as I walked into the courtyard toward our front door I could hear the roommate in her baby kitty talk. You know, the kind where she substitutes Y’s for T’s in her speech and concludes each sentence with a definitive, humanly-articulatedÂ ”Meow.” And she never calls her own cat by her name. Rather, she’ll substitute it with “monster cat,” plain “monster,” “kiyu-yiu,” “gremlin,” and some others I’ve forgotten.

Though I’d be lying if I said both our voices don’t go up an octave or so whenever either of us talk to the cats.

I imagine that if I could hear her in the courtyard, how many times haveÂ people been in said courtyard when either of us were talking to our cats? I guess it’s stranger that it tookÂ this long for me to experience it.

We did get some validation in terms of being clean, odor-freeÂ pet owners. I was relieved when one of Cortnie’s friends said our place didn’t “smell like cats.” Have you ever visited a friend’s house in grade school and thought, “Oh, so that’s why she smells like that?” I have. Yeah. That’s where you don’t want to go.

Just let us have the crazy kitty talk. 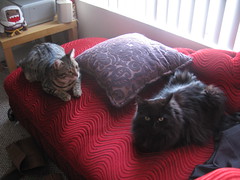