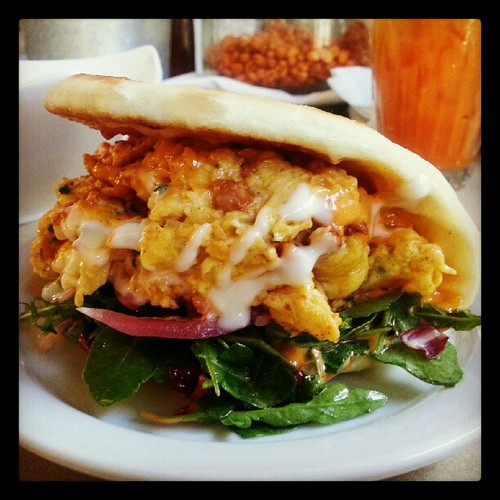 Breakfast Bäco[/caption] Anticipation of Josef Centeno’s upcoming Bar Amá reached fever pitch recently as a result of Bon Appetit naming Bäco Mercat”) one of America’s 10 Best New Restaurants”) (Michael Voltaggio’s Ink also received a nomination in this category - bravo for Los Angeles). But nothing prepared me for the day on which my cravings  actually led me to leave the 49ers-Packers game on my TV during free DirecTV NFL preview week. I wanted eggs. I wanted a Bloody Mary. I also wanted a Bäco. [caption id=“” align=“alignright” width=“320”] 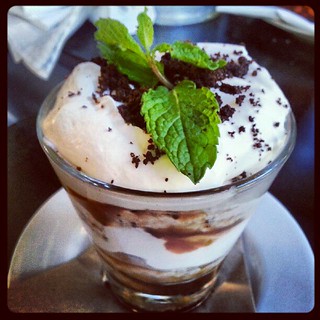 Banana Cream Pie Rice Pudding[/caption] And to Bäco Mercat I went, driven by my bicycle, the southbound Metro Red Line and a “hanger” (hunger + anger) so intense, only the Breakfast Bäco and a spicy, red Hair of the Dog could quench me. Enter that magical flatbread, which came chock full of eggs, chorizo & cheese, but also arugula and pickled onions - altogether dressed in a spicy, comforting aioli. The wholesome but piquant sandwich becomes a mess after just a few bites, but one that you’re happily willing to dirty your face - and who knows what else - with. You eat a bäco with your elbows out. The Bloody Mary also did the trick thanks to a strong pour, plenty of fresh horseradish and housemade ingredients. But nothing really prepared me for even the dessert menu. My server helped me out by pointing out the brand new addition: The Banana Cream Pie Rice Pudding. The what? If you were to recount Josef Centeno’s days at Lazy Ox Canteen, you’d remember the rice pudding as the “go to” dessert, forcing all of us to reconsider all those times in our childhood we’ve passed over it at the family potluck. And the “go to” dessert at Bäco? The Banana Cream Pie, thanks to its creamy but potent banana flavor and flaky, delicate crust. The combination of the two is like a mashup of the greatest Josef Centeno desserts. And the result was fantastic. Bananas, al dente rice, caramel and whipped cream - all topped by a sprig of mint and crunchy chocolate cookie crumbs. And so we wait for Bar Amá, which will be serving Centeno’s native Tex-Mex. Bäco Mercat will continue to do us just fine…